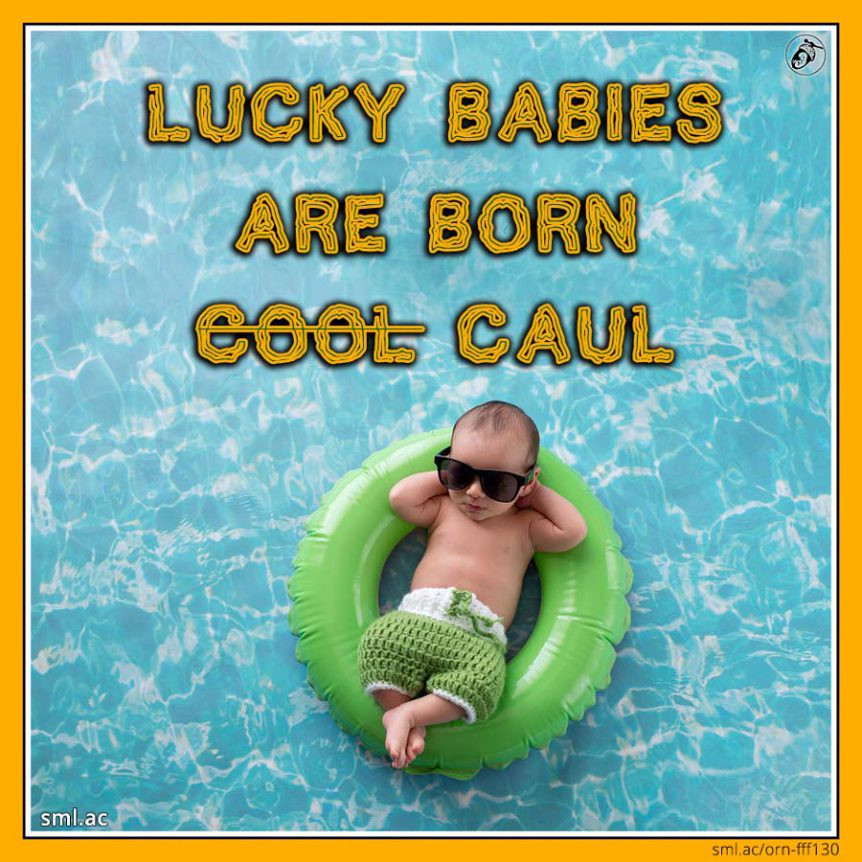 Some babies are born lucky and part of the thing that makes them lucky was once highly sought after by lawyers, miners and sailors as it was believed it would bestow luck and virtue to those that carried it…

There are many superstitions around birth and newborns, we covered the custom of spitting into a baby’s face in week 71, but this week we’re looking at a rare phenomenon that occurs to less than 1 in every 80,000 births – babies that are born with the caul and in the caul.

So, WTF is a caul? A caul is a piece of membrane that covers a newborn’s head and face at birth.

In the case of a caul birth, there is a portion of birth membrane that remains on the head. The membranes come in a few variants and have been referred to as helmets, shirts, veils and bonnets. They are often removed easily after birth and care should be taken to not damage a baby’s skin. It is said that a “true caul” covers the whole face and is secured by two ear loops.

In the case of an en-caul birth, the baby is born completely inside the entire amniotic sac! There are a number of videos that show these incredible types of rare births, but the videos that show en-caul in its most dramatic fashion are those taken during a caesarean birth.

The children that are born with a “true” caul are often referred to as caulbearers and it’s been said that they have psychic gifts. Those that are born inside their amniotic sac are said to be lucky, special or protected, and unable to drown as long as the caul is kept safe.

The mystery and superstition around caul births can be traced back millennia. Many cultures consider a baby born with a caul as a sign of good luck and these births have been noted in literature, folklore and other superstitions for centuries.

In Roman times, midwives were known to steal and sell cauls to lawyers who believed they brought good luck in winning their cases. Miners believed the luck a caul would bestow would protect them from explosions and cave-ins. Because of the association with protection from drowning, the cauls from en-caul births in the middle ages and as recent as the 1950’s were highly sought after by sailors. Russians use the term “born in a shirt” to mean born lucky. In Polish “born in a bonnet” and in Italian “born with shirt”, both refer to a person who is lucky. However, in Romanian folklore, it is said that a baby born with a caul will turn into a vampire when they die.

There are many literary examples too: A baby boy born with the caul became the basis for the Brothers Grimm fairy tale number 29; “The Devil With Three Golden Hairs”. This tale was thought to be an influence for some of J.R.R Tolkien’s work. On the first page of a Charles Dickens classic, it is mentioned that David Copperfield was born with a caul. Danny, the 5-year-old from Steven King’s “The Shining” is born with a caul and It also appears in Dean Koontz’s novel “Whispers”.

There have also been some notable people to have been born in the caul: King James I of England, Sigmund Freud and the beloved actor, singer-songwriter and comedian – George Formby.

The fascination with birth associated human tissue is an odd one for many, but over the years cauls have been items of great value to certain people. Over the centuries these amazing births have given rise to the wonder and mysteries surrounding birth. Something that even now, we still don’t fully understand. Some of us were born with a caul, some of us were born en-caul, whilst others are just born too cool!