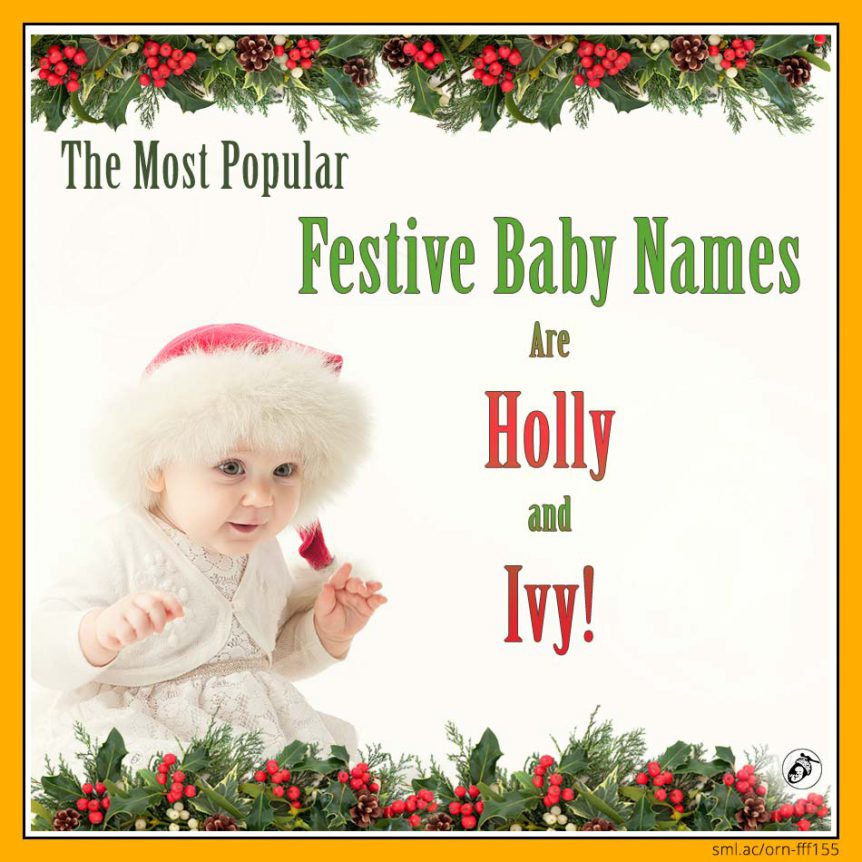 What’s in a name?
“That which we call a rose,
By any other name would smell as sweet.”
With the Christmas season upon us, we thought we’d take a delve into 44 festive names and some of their meanings – many popular, some cheeky and others a bit obscure. And in Bev’s Bonus Fact she’ll be explaining why Mr Claus is called Santa.

Because we’re taking a break over the festive season, this will be the last Fun Fact Friday of 2018! Don’t worry, we’ll be back in the New Year with plenty more.

Being Christmas, the mass of Christ, it would be simple to go all out on religious names. But that would be too easy! For those of you that are expecting a baby during the coming weeks, here are 44 festive baby names to add to your short list…

Let’s start with some girl names…

Amaryllis – That beautiful red flower that many of us associate with Christmas. It comes from the Greek “to sparkle”

Carol – whilst this name reminds us of all the festive singing it’s meaning is a little less flattering. It comes from the Latin meaning “Manly”

Clarice – Whilst not directly a festive name, we thought we’d add it as she’s Rudolph the red nose reindeer’s love interest. But, in my mind, I will always associate this name with an infamous scene from the 2001 thriller, Hannibal.

Clementine – What would a stocking be without one of these?

December – It’s arguably the best month of the year

Eve – The traditional meaning is “living”

The most popular festive baby names of last year (2017) were

Mary – The Mother of Christ

Merry – As in Merry Christmas. Short for Meredith. In Welsh it means ‘Guardian of the sea”

Natalia – From the French meaning “Born at Christmas”

Snow – As in Snow White

Winter – Well it is cold!

And onto the boys…

Balthazar – one of the three wise men

Casper – Another one of the three wise men

Claus – which actually means “ Victorious People”. Sometimes short for Nicholas, however, it more than likely reminds us of the father of Christmas himself – Santa Claus

BONUS FACT
Why do we call the bearded gentleman who comes into our rooms whilst we sleep, then empties his sack, Santa Claus? He started as Saint Nicholas, the patron saint of children, then over time Nicholas became shortened to Claus.
Originally from a dialect of Dutch, Sint-Nicolaas or Sinterklass, and the traditions surrounding him were taken with early settlers to the United States. There, they became the very basis of the Santa Claus we know and love today.

Ebenezer – The name most familiar as the lead character of “A Christmas Carol”. It also has biblical roots and means “stone of help’

Jack – Jack Frost is the personification of everything cold along with his counterpart, Old Man Winter

Jesus – whilst less popular in the English language, Jesus is still a popular name in Spanish speaking countries, being pronounced “Hey Zeus”. Which reminds me of a film…

Joseph – The Father of Christ

Melchior – Thus, our trio of wise men is complete

Noel – from the French for Christmas

Nicholas – The big man himself

North – That’s where the big man comes from

Tannen – from the German meaning fir, as in fir tree. A fir tree is the basis for the popular German Christmas carol “ O Tannenbaum”

Yule – stems back to Old English and means “Winter Solstice”

The astute amongst you will notice we’re a bit shy of our 44 festive names. That’s because we left 9 well known, but less popular names until now. As the song goes…

And how can we forget the most famous reindeer of all?

Have a wonderful Christmas, an amazing New Year and we’ll see you next year.