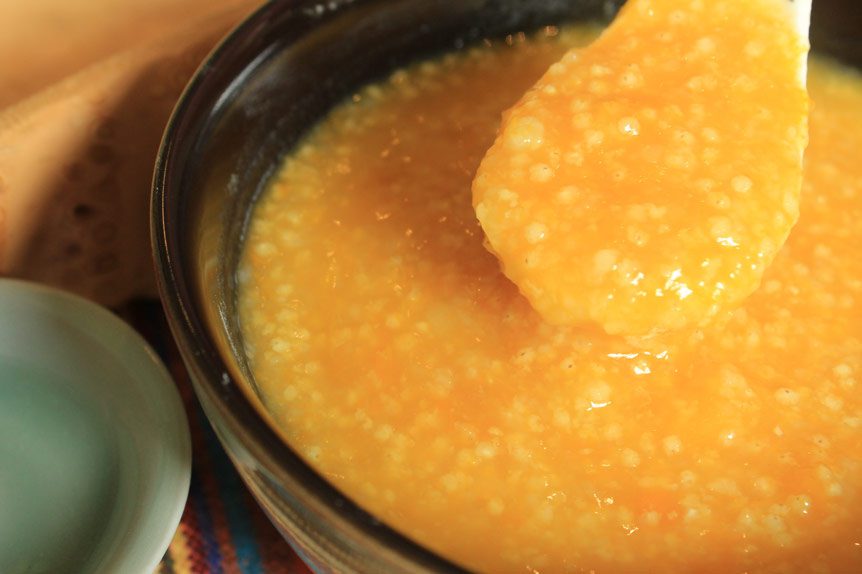 Fun Fact Friday is 6 months old, that time in a baby’s life when you can start introducing solids – not before as many would like you to believe.

If you’ve ever looked down the baby food aisle, you would assume, presume and quite rightly surmise that you should start weaning your wonderful bundle of joy from 4 months, such is the plethora of jars, packet, sachets and tubs emblazoned with a “suitable from 4 months” or “4 months +” all over them. DON’T BE FOOLED. The Department of Health recommends starting solids at 6 months and has done since 2003, as do all of the following organisations: World Health Organisation, UNICEF, American Academy of Paediatrics, American Academy of Family Physicians, National Health & Medical Research Council plus many more.

It’s quite simply there because they can put it there. This country, the UK, has not adopted the International Code of Marketing of Breast Milk Substitutes [PDF] as law – it’s just a guideline – and until it does (It is in many countries [PDF]) babyfood manufacturers will continue to confuse parents by saying their foods are suitable from four months, because why would they waste two months of valuable commerce?

There are many biological reasons to introduce solid foods AFTER 6 months (not mentioning the physiological), here’s a couple of the more important ones:

The gut is still open (immature)

It’s often referred to as “The Virgin Gut”!

The following from Kellymom explains more on the open gut; “…from birth until somewhere between four and six months of age babies possess what is often referred to as an “open gut.” This means that the spaces between the cells of the small intestines will readily allow intact macromolecules, including whole proteins and pathogens, to pass directly into the bloodstream. This is great for your breastfed baby as it allows beneficial antibodies in breastmilk to pass more directly into baby’s bloodstream, but it also means that large proteins from other foods (which may predispose baby to allergies) and disease-causing pathogens can pass right through, too. During baby’s first 4-6 months, while the gut is still “open,” antibodies (sIgA) from breastmilk coat baby’s digestive tract and provide passive immunity, reducing the likelihood of illness and allergic reactions before gut closure occurs. Baby starts producing these antibodies on his own at around 6 months, and gut closure should have occurred by this time also.” For more information on “The Virgin Gut” have a look at this article.

The pancreatic enzyme amylase does not reach adequate levels for digestion of starches until around 6 months.

As Sarah Ockwell-Smith puts it, in her Huffington Post article titled “Eight Common Baby Myths You Might Believe (And Why You Shouldn’t)”, “During their first three or four months of life, a baby’s easy to digest milk diet doesn’t require salivary amylase (the enzyme that enables their body to convert starch to sugar in order to convert food to energy). Babies do not produce any salivary amylase at birth, the production begins and slowly increases over the first six months. A baby’s salivary amylase levels only reach comparable levels with an adult’s by around five to six months of age. It is only at this point that babies can convert the nutrients found in starchy foods (e.g: rice, grains, fruit and vegetables) into energy. If babies are weaned before this age, their nutrient absorption will be significantly poorer and can lead to digestive disturbances such as diarrhoea, constipation and stomach cramps – all of which interrupt sleep.”

As with the extra pressure on the digestive system, the immune system gets a whole heap of added pressure thrown at it, it may be of no surprise to find out that adding early solids into the mix has links to the rise in food intolerances and autoimmune diseases such as Celiac Disease.

Whilst researching for this post, I fell down a rabbit hole of information, misinformation and opinion. There is so much more to introducing solids than the short piece above, including the physical cues such as the ability to grasp food, sit up alone, the lower jaw increasing in size and moving forward, their cheeks becoming less chubby (creating more space for food to move around), the gagging reflex moving towards the back of the tongue and the tongue itself gaining the ability to move correctly. This subject deserves more time and I fully intend to create a whole post or series of posts covering it in more detail.