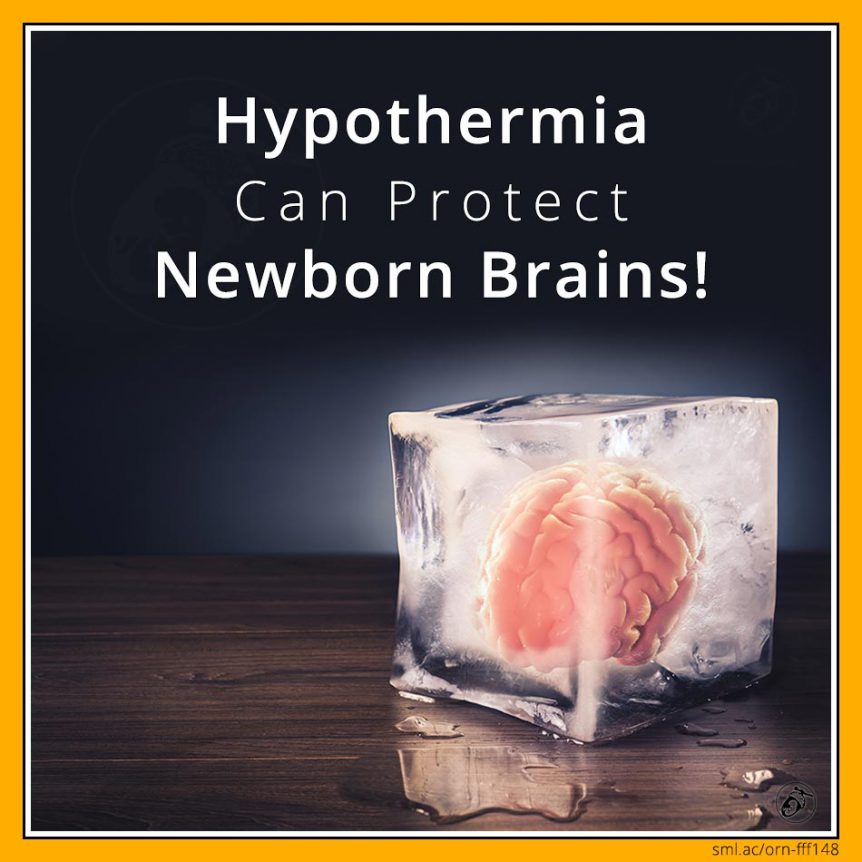 There are many things that you can think of that could be beneficial to a newborn. Being cold isn’t very often at the top of the list, if on it at all. But there are circumstances when being treated with hypothermia could be the best thing for your newly-born bundle of squidginess.

This condition is known as HIE, which is short for Hypoxic-Ischemic Encephalopathy. Hypoxic means lack of oxygen, Ischemic means restricting blood flow and Encephalopathy means that it affects the brain. So, in essence, HIE is a lack of blood and oxygen to the brain. This condition may also be referred to as; oxygen deprivation at birth, birth asphyxia or fetal oxygen deprivation.

HIE’s effects are wide and varied, as are the causes. However, in most cases of HIE, there are indications that there is an increased risk before birth. Roughly 1.6 births in every 10,000 are affected by HIE without prior abnormalities being evident.

HIE effects will vary depending on whether the child has mild, moderate or severe symptoms. Many with mild symptoms can lead an uninhibited life, whereas those affected by severe HIE may have a shortened lifespan. The effects of HIE may include developmental delays, epilepsy, cognitive issues, motor skill delays and neurodevelopmental delays. HIE is thought to be responsible for 10-20% of all cases of cerebral palsy.

The true severity of HIE doesn’t become evident until a child reaches 3-4 years of age, by which time there is little chance of effective treatment and the only real course of action is to manage the symptoms. But, a relatively new, very well studied course of treatment has shown to have incredibly positive results in minimising the damage caused by HIE.

The treatment is known as hypothermia therapy and has shown to have an almost doubling of the chance of survival of those affected by HIE. During this treatment, a baby’s temperature is reduced by as much as 4℃. This is achieved using whole body cooling or selective cooling via a cooling cap.

When the initial injury occurs it causes damage. Those cells that were damaged then go on to release toxins, and those toxins are the cause of the second stage. The second stage begins after oxygen and/or blood flow is restored and can carry on causing damage for up to 72 hours. The damage caused by this second stage is known as a reperfusion injury and it’s during this stage that hypothermia therapy comes into play.

By cooling an affected baby, you can slow down its metabolic rate and give the cells a chance to recover. This reduces the severity of the reperfusion injury. The process of cooling lasts up to 72 hours at which point they are slowly warmed back up to normal temperatures.

Fortunately, treatment using hypothermia for HIE is pretty close to optimal, in a clinical setting, and thus the chances of it reducing HIE’s secondary damage is high. But, it is only treating the secondary damage and cannot effectively treat the damage caused by the first stage.

To do this, science is looking towards augmenting hypothermia therapy with other treatments, including stem cell therapy, xenon gas treatment, the use of hormones produced by the kidneys, and other treatments using melatonin, anticonvulsants, and IGF-1.

Isn’t it amazing that we can change the lives of so many affected by HIE by just keeping them cold? ? But this is only possible if treatment is quick enough.

The most critical part in treating HIE with hypothermia is the speed in which it is delivered. Those treated within 3 hours were shown to respond well and cell death was massively reduced. But delay that to 5.5 hours and only a partial recovery was evident, with little effect on cell death. When delayed to 8.5 hours after initial injury there were no improvements seen with hypothermia therapy.

It is evident that early intervention and swift treatment is key to stopping damage to the affected brain of those infants impacted by HIE. And because there are often clear indications before birth that HIE could be a factor, hypothermia therapy could help far more babies affected by that condition.