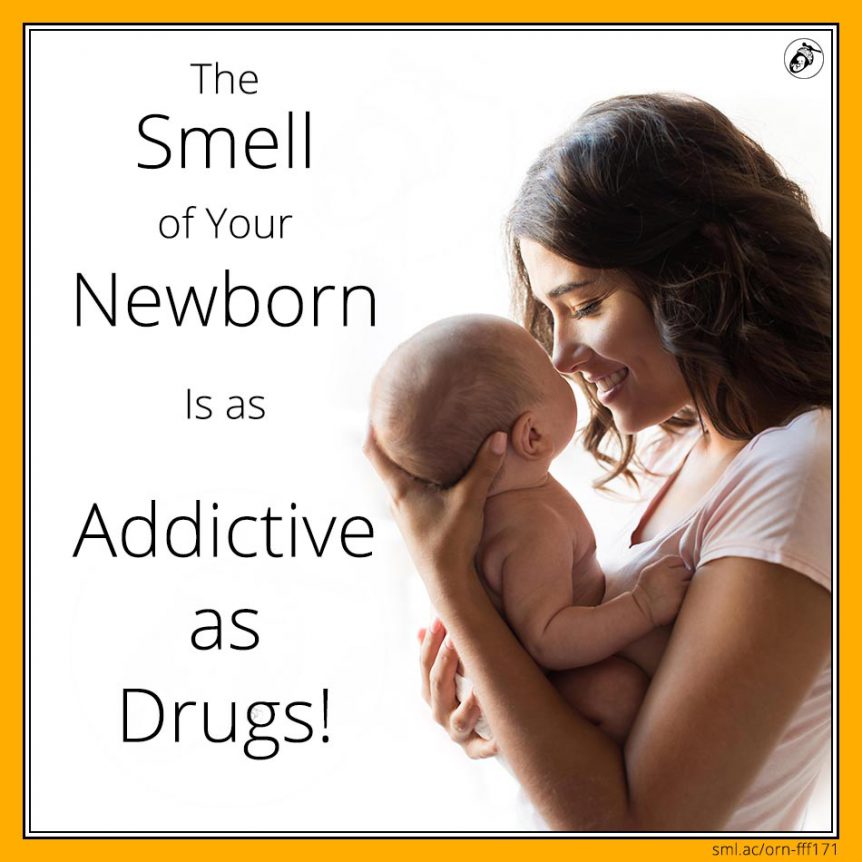 The Smell of Your Newborn Is as Addictive as Drugs!

Ever thought the smell of a baby is addictive?

This week we look at the chemical that causes this rush of pleasure and a study that proves how addictive smelling babies can be.

A peruse around the web would make you think that the new baby smell is a myth. However, whilst not fully understood, the newborn baby smell has been proven to be as addictive as food, sex and meeting addictive cravings.

Have you ever been crazy hungry and finally got your hands on the piece of food that you’d been longing for?

Do you remember the pleasure of meeting that need?

That surge of pleasure you felt was caused by dopamine. Dopamine is the Hamlet of brain chemicals: it is responsible for telling individual neurons “To fire or not To fire”. It influences signals and pathways within the brain and serves as the gatekeeper of motivation, emotion and social behaviour.

Dopamine is key to one of the most important parts of the limbic system, a reward pathway called the mesolimbic dopamine system. This reward circuit’s main function is to cherry pick activities and make them feel rewarding. These circuits are especially activated when eating after being very hungry, having sex and when a craving addict gets their fix. This system also drives neuron growth to motivate us to feel those good sensations again.

Too much dopamine can make you psychotic and high amounts can cause euphoria, aggression and intense sexual feelings. Drugs, such as cocaine and methamphetamines, utilise this to their benefit. They work in two ways: Flooding a system or stopping it from emptying.

In the case of methamphetamine, it dumps a load of dopamine into the system to produce its effects. Cocaine does it differently.

Normally, dopamine does its work and is removed by a transporter to be recycled for further use. Cocaine prevents this from happening, which means that dopamine accumulates and produces an amplified signal, producing similar effects to a flooded system.

This neurological reward circuit is also activated by the smell of a newborn baby. And its aim is to get us addicted to our children.

One study looked at a set of women, half were new mums and the other half had never given birth. All participants were non-smokers and the new mums were all breastfeeding. They were asked to smell two different smells whilst undergoing scanning of their brains by fMRI.

One of those smells was odourless, whilst the other was that from one of 18 newborn babies. It should be noted that the babies were not related to the participants. Those smells were collected from each of the 18 babies’ undershirts that had been worn for the first two days after birth. Once collected, they were flash frozen at -80ºC to preserve their smell and stop them changing until the time when they were needed.

All women showed activity in the reward parts of the brain, with new mothers showing more activity. In fact, the new mothers’ reward centres responded so strongly, that there was a marked statistical difference when compared to the non-mothers.

BONUS FACT
This isn’t the first time that studies have looked at mothers and the smell of their babies. In 1984 women were given 3 hospital gowns to sniff and 80% of them were able to guess which one their child had worn. Then, 32 years later, another study found out that mothers prefer the smell of their own child’s poo to that of other children. Do with that what you will.

Researchers are not entirely sure what the smell is or how it is caused. But, there are a few theories: Some suggest it may be the smell of leftover amniotic fluid, whilst others propose it could come from a babies sweat glands. Then there are some that think it may have something to do with the cheesy, waxy-like coating that babies are born with – called vernix caseosa or just vernix. It is still fairly common to rub the vernix off a newborn. Yet, vernix is so good for skin the beauty industry has been studying it for years, something we discovered in week 147. So, don’t rub it off – RUB IT IN!

So, what about us dads?

Do we have the same reaction?

It is thought that dads do have a similar reaction, but, there are yet to be any studies to prove it in the same way.

But, there have been other studies that prove a dads sense of smell can be just as effective as a mothers. In 1988, they asked 15 mothers and 12 fathers to smell two different bottles of amniotic fluid and decide which one belonged their child. 12 of the 15 mothers were able to guess correctly. Whereas all bar one of the fathers were correctly able to distinguish their child’s.

Smell-based bonding can work the other way too. Babies know their mother’s smell and they can tell the difference between their mother’s milk and that of another. It is thought that there may be similar reward centres being activated in babies’ brains too.

Of all our senses, smell is the sense that we are least aware of. It kind of flies under the radar. Yet, it does much of the heavy lifting, tying together memories, learning and emotions. Almost everybody has a memory that can be triggered by certain smells.

The magic of it is, the more we interact and the more we smell, the more we are rewarded and the stronger the bond becomes. So, smell your baby as often as you can, you’ll get rewarded for it and your bond will grow stronger with each and every sniff.