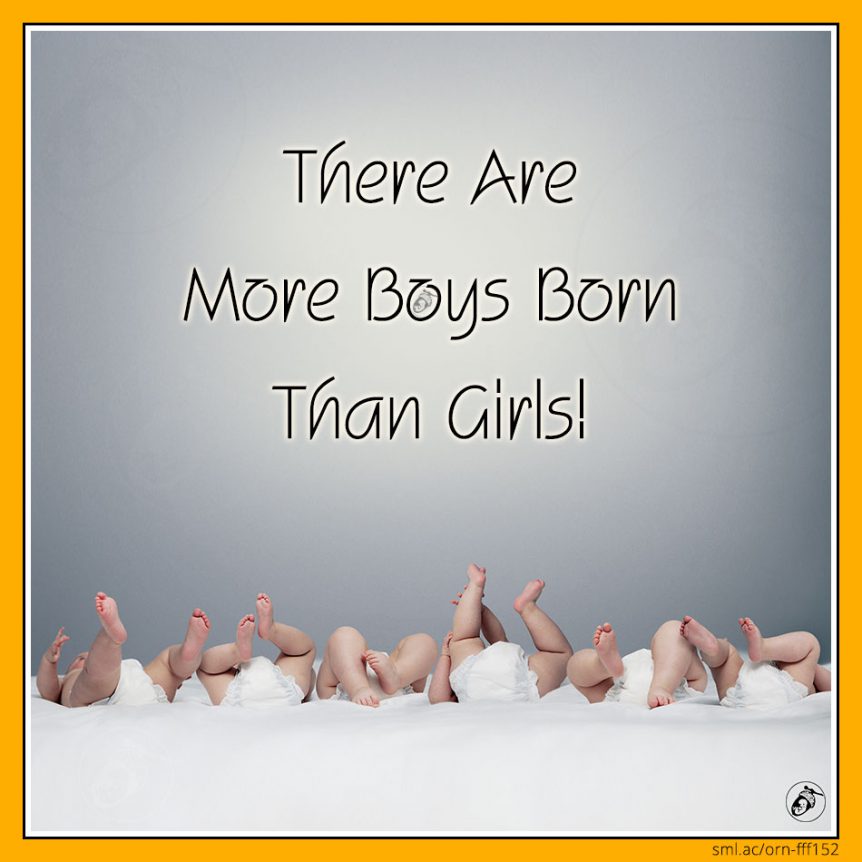 Whether you have a boy or a girl may be down to more than just the chromosome of the sperm that wins that ultimate race. There may be more factors at work that we first thought. The balance between men and women, as a species, is a fine one. Or is it? Do we really need as many men? Yes we do and we’ll explore why at the end of this week’s Fun Fact Friday

The sex of a baby is exclusively governed by the father’s sperm and whether or not it carries an X chromosome – for a girl, or a Y chromosome – for a boy. But, with a disproportionate balance of boys vs girls, the probability of this being the only factor is brought into question.

For the past 400 years, or so, we’ve known that there are slightly more boys born than girls.
Yet, this phenomenon is strange. If the sex of a baby is solely determined by chromosomes, you would expect the ratio to be a straight 50/50 split and not unbalanced in favour of the boys.

It has been fairly well established that sperm have a pretty much even split of X and Y and there are many studies that support that claim. If anything, some studies have actually shown that there is a slight increase in the amount of sperm with an X chromosome. This would indicate that the increase in boys is unrelated to sperm chromosome ratios.

This unbalance would suggest that there are other factors, besides the sperm’s chromosome, that are influencing the sex of babies – Before conception during a sperm’s journey to the egg, and after conception during pregnancy.

Worldwide, there are 107 boys born for every 100 girls. This disproportionate number is skewed partly due to sex-selective abortion and gendercide in cultures where males are more desired. Yet, even if you discount that factor the number is thought to be somewhere in the region of 105 boys to every 100 girls.

There are many factors that contribute to whether an X or Y chromosome sperm may be the first to fertilise an egg. Those factors may be parental age, stress, their environmental exposure, the stage in a mother’s ovulation cycle and even if the mother has had any children before.

An important study mapped the trajectory of the X Y ratio from conception to birth. It found some very interesting results around gender-specific loss in pregnancy. Their findings suggest that the ratio is balanced at conception but changes at different stages throughout pregnancy. There is an increased loss of males very early and late in pregnancy, however, female loss was higher for the remainder of the pregnancy. The net result was a greater loss of females, consistent with the uneven gender ratio.

BONUS FACT
Not only are there more boys born than girls but they also weigh, on average, more too. It’s thought this may be, in part, due to the male sex hormones. As well as increasing a boys weight, these hormones may also cause them to grow earlier than girls.

The whole area around gender ratios is still somewhat of a mystery to many. There are different theories and many studies have attempted, but failed, to find conclusive results.

There is often a reduction in the number of boys born after disasters, terrorism and economic collapse. It is thought that the high levels of stress associated with these incidents raise a mother’s levels of testosterone – which is associated with an increased risk of miscarriage. And if males are weaker then they would be disproportionately affected by this.

The same disadvantage may also be applicable to those that are exposed to high levels of pollutants that disrupt hormonal systems.

A link has also been found between the blood pressure of a mother and the sex of her offspring. The higher her systolic blood pressure, pre-pregnancy, the higher her chance of having a boy. Notably, though, there was no correlation during pregnancy.

Then let’s not forget the tonne of anecdotal evidence from foods to eat at various points, clothing and underwear choices to positions to conceive in. The list is nearly endless!

The people who study the statistics that affect human populations including births, deaths and diseases are called demographers. Many of them speculate that the imbalance may be evolution’s way of evening things out overall. Boys are more likely to suffer health complications as infants and that’s not the only disadvantage. Adult men are more likely to die younger because they take more risks, kill each other more often and have more health problems, on average, than women. Whilst it doesn’t balance the ratio exactly, it does bring it closer, with the total world population having a ratio of 100 women to 101 men.

Gender ratios vary from country to country and overall, the whole world’s population is fairly balanced. In fact, most developed countries actually have more women than men. The small bias of 101:100 may be due to the strong preferences for males in certain parts of the world.

Why does evolution need to be balanced if men make over a billion sperm a month, whilst women only ever release about 450 mature eggs in their lifetime? Surely we could do with fewer men?

The answer is fairly straightforward, widely accepted and was first posed by the evolutionary biologist, Ronald Fisher. The principle is that any difference in gender ratio will diminish over time because the reproductive advantage is automatically held by the members of the minority sex.

For example, if there were more female births than male, then newborn males would automatically have better chances of mating than newborn females. They could also expect to have more children themselves. Those who were genetically disposed to have boys would, therefore, have more grandchildren. And so their male-producing genes would spread and male births would become more common until the population approached a gender balance.