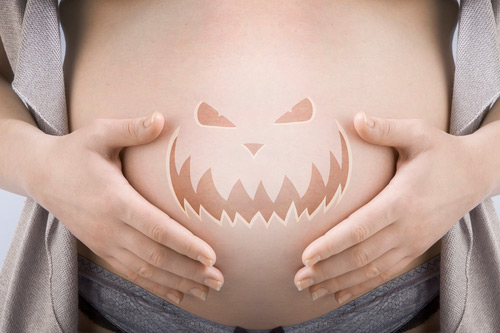 It’s Halloween on Monday. With this in mind, welcome to…
Freaky Fact Friday
and Happy Halloween!

I should probably start by stating that the headline is not talking about human babies – you can relax now!

We, as humans, could have it worse when it comes to childbirth – some other animals have it far worse:


The Giant Pacific Octopus Starves Itself to Death protecting Its Offspring!

After spending a month or so, the giant Pacific octopus, will produce about 56,000 eggs. She then takes them to her “den” and protects them for five to six months, without food. Until, as she nears death and as her eggs reach maturity, she repositions herself in order to use her siphon to blow her many thousands of eggs free, out into the open ocean. And to make it worse, of the 56,000 eggs that she gave her life for, only 2 on average make it into adulthood! The less tragic, less “freaky” version can be found here


Meerkat “Dictators” Kill Other Females’ Offspring Then Make Them Wet-Nurse or Be Disowned!

Meerkat society is ruled by one dominant male and one dominant female. They dictate jobs and reproductive rights of all those below them. Lower ranking females that manage to give birth are met with swift and brutal retaliation. Their litter is killed and the bereaved mum is given two choices: wet-nurse the offspring of their children’s killer or leave the colony! The less “freaky” version is here


Hamsters Will Eat Their Babies at the Slightest Hint of Danger!


Sea Lice Babies Eat Their Mum Alive as They Are Born!

Female sea lice probably have it the worst. They don’t get wooed by the sounds of Barry White, or taken to a fancy-pants restaurant or even performed to by a fancy, mating ritual-type dance. They are unceremoniously raped! And then to top off the freaky cake with a big fat cherry, their offspring quite literally chew their way out of the mother’s warm, pulsing body. Have a look at the video below and watch how it makes Alien look like a walk in the park!