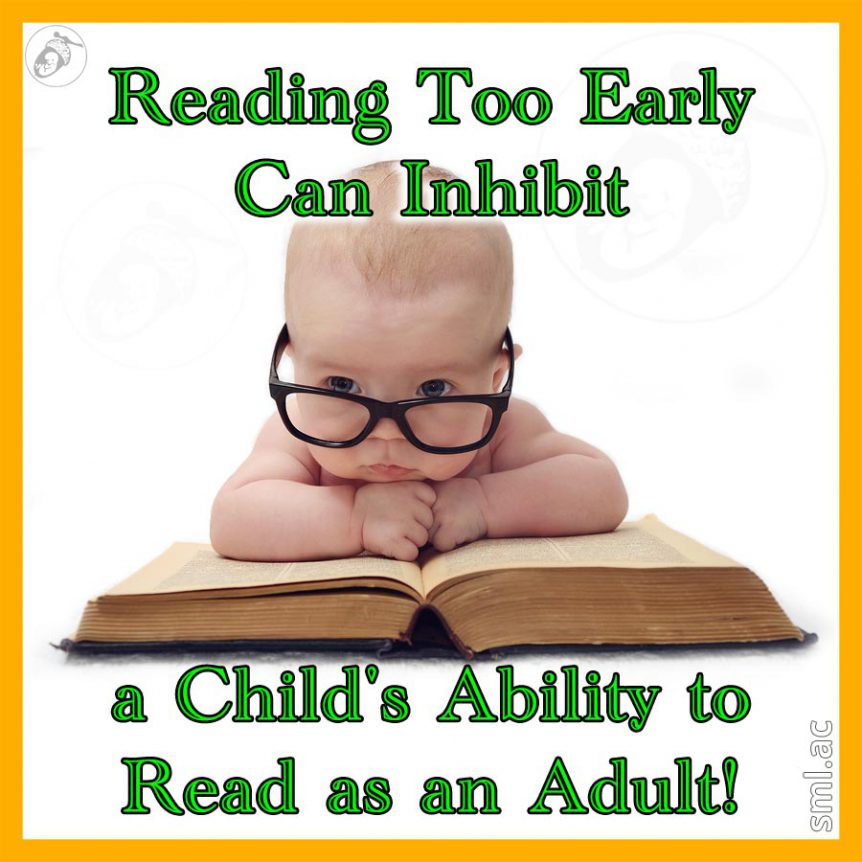 When I first heard this, I thought “ Yeah right, that’s bullsh*t”, then I read the evidence!

Whilst we were pregnant, we were sure that our little one would be proficient in his alphabet before his second birthday. We invested in flash cards and any other items that could or promised to, help us achieve this.

What a waste of money!

He’s now three and we are in absolutely no rush to teach him his alphabet or drill him using flash card and we’re actually making efforts to avoid it. That doesn’t mean he doesn’t know his ABC – much to our surprise one quiet Sunday morning, he sang it from A to Z whilst wandering around the house. And with only a slight wobble at the LMNO, as many children do.

The thing that is most amazing about that moment is that we have never made a conscious effort to sing it to him, have actively been “kinda” avoiding it, and there is only one toy that sings it – it’s not a favourite of his either! We were surprised, to say the least! Having just finished, we promptly tried to coerce him into singing it again, but as much as we tried, he would not be our performing little monkey!

Well.. what does that mean? Maybe we should teach him his written alphabet? NO. It merely means he’s heard a song that he likes and he’s singing it. No need to dig out the flash cards… at least not for another 3 or 4 years…

It is often thought that reading early can open up the world to children and that there’s no such thing as reading too early, an opinion I too once held. It was then explained to me how the brain develops and why it’s important to not rush them into reading.

In England, formal education commonly starts at the age of four and is when children are first taught literacy and numeracy (more accurately – it’s common that most will start school in the September following their fourth birthday. However, it is not compulsory that they start until the school term following their fifth birthday).

This early start puts the UK in the minority when comparing it to other European countries (this study from 2013, looked at 33 countries), with only Northern Island having an earlier compulsory start age of four.

So why do we start so much earlier than other countries?

Because simply put, some MPs decided it – nearly 150 years ago!

It was decided in the 1870 Education Act, with no basis upon any developmental or educational criteria. The reasons put forward were related to child protection (from exploitation in the home and unhealthy conditions in the streets). Martin Woodhead, in his paper from 1989, notes that there was also a political imperative to appease employers because setting an early starting age enabled an early school leaving age to be established so that children could enter the workforce.


I’ll leave you to make up your own mind as to the suitability of those decisions, whether the best interests of children were in mind or the best interests of others. One thing that is clear is that the starting age of school, in England at least, has absolutely no basis in evidence – developmentally, anthropologically, psychologically, neuro-scientifically or otherwise.

The brain is bilateral, consisting of two hemispheres – the left and the right. It’s relatively well known that they control opposing sides of the body, i.e. the left hemisphere of the brain controls the right side of the body and visa versa.

It’s the development of the links between these two hemispheres that are one of the critical development points when it comes to learning to read. It’s not that you can’t teach a young child to read, you can, but teaching them to learn before these pathways mature, can lead to “poorer text comprehension and less positive attitudes to reading”.

The right-side of the brain matures more quickly than the left, and because of this, children taught to read early (as opposed to naturally picking it up) often rely on right brain processes to read. When taught this way, children’s main tactic when reading is to memorise the sight of words and tend to guess at unknown words using clues such as the beginning and end letters, context and its appearance.

Whilst they are valuable methods for reading, they are not balanced. As a consequence children taught earlier tend to tire quicker and more importantly, struggle to derive meaning from what they have read. This is because the way they use to decode words makes the content hard to comprehend. The reading issues associated with this type of learning can persist into adulthood.

If the left-side of the brain has had enough time to mature and the pathways linking the two hemispheres together have developed, then the process of learning to read becomes far more balanced. It becomes easier for children to visualise meanings, sound out words and mentally play with abstractions. Short words are memorised and longer words are sounded out – a far easier approach. As their vocabulary increases, their ability to picture and understand what they are reading becomes far easier.

There are many, many factors that contribute to a child’s “readiness” to read, as there are many factors that help a child develop. To be ready to read involves “complex neurological pathways” and “kinaesthetic awareness” – meaning they have a good physical awareness of their body and how it interacts with the world.

There are a myriad of physical movements that contribute to this awareness, from large movements – jumping in puddles, climbing, running, riding bikes etc. To the finer movements – playing in sand, using scissors, building, drawing etc. Then there’s the essential growth that comes from snuggling, listening to stories, singing and experiencing new tastes, sights and sounds. All things that children are naturally drawn towards. Movement is strongly attached with learning, this is especially true with boys.

We’re led to believe that on a rainy day, a good use of time would be a visit to an educational exhibit (including the long journey). When children are more likely to derive more developmental value from digging in mud, jumping in puddles and cleaning up with playtime in the bath.

These experiences are the strong foundations of learning, they develop new neural pathways and build upon left brain development. In the form of play, such activities build upon their confidence, smooth sensory processing and creates a vault of directly learnt experiences that help in building abstract concepts.

There are many other factors that contribute to this readiness, from a supportive and cohesive family where play and conversation are part of everyday life – to having screen-free periods where their imagination can take the lead to helping with everyday tasks such as cleaning, preparing meals and day-to-day errands.

The optimal point to learn to read, write and spell varies from child to child. For the most part, around the seven years old point appears to be the average, but that doesn’t mean some won’t be ready as early as four or five, while others may not be ready until 9 or ten or even later.

There’s often fear associated with “allowing” children the freedom to learn to read when they are ready – that they will be left behind the other children that were taught to read at an earlier age. This is not the case!

Don’t believe it? Have a look at this exerpt from this article, from the University of Cambridge:

“Studies have compared groups of children in New Zealand who started formal literacy lessons at ages 5 and 7. Their results show that the early introduction of formal learning approaches to literacy does not improve children’s reading development, and may be damaging. By the age of 11 there was no difference in reading ability level between the two groups, but the children who started at 5 developed less positive attitudes to reading, and showed poorer text comprehension than those children who had started later. In a separate study of reading achievement in 15 year olds across 55 countries, researchers showed that there was no significant association between reading achievement and school entry age.”

A childhood full of play is the foundation to a fully developed brain, where both hemispheres contribute to a child’s ability to read and easily digest that information. I hope this helps you have fun and play more, knowing that it is contributing to your child’s neurological development and also helping you to avoid falling prey to the competitive nature of modern parenting.