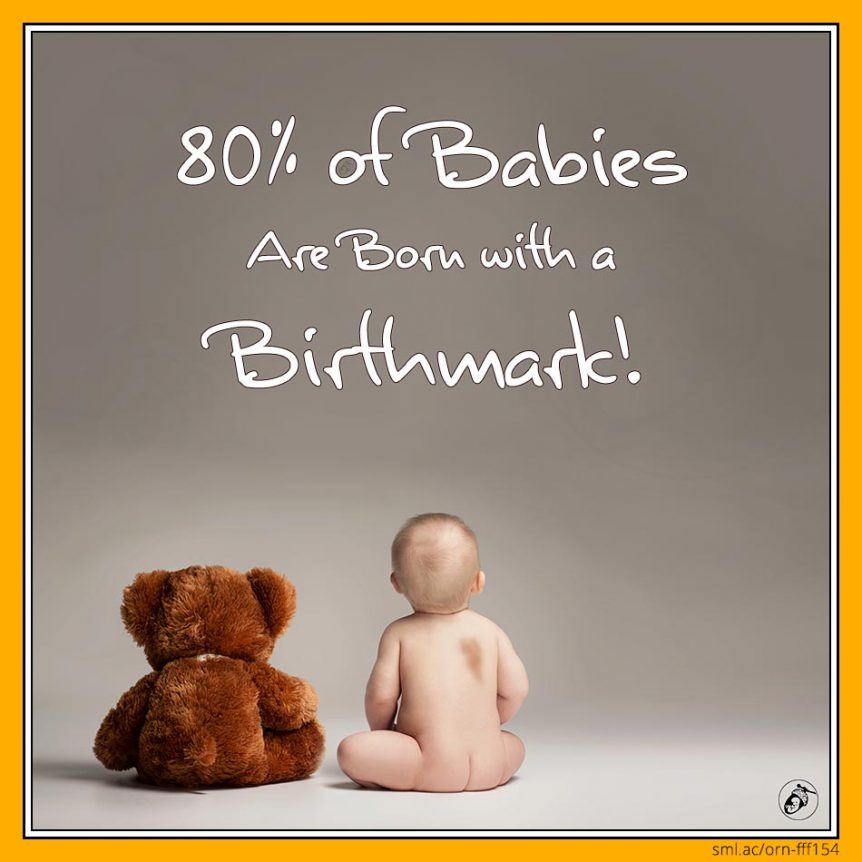 It can be a shock for parents when they first see a birthmark on their newborn. Some birthmarks last for a lifetime, whilst others fade away. This week we’re delving into them and discover what makes each type of birthmark different, why they are mostly harmless and disappear in time. And why some have weird and wonderful names – from stork bites and angel kisses to milky coffee marks and blue butts…

Birthmarks are discoloured areas of skin that are usually present at birth, but, can take a few months to show up. They come in a wide range of shapes, sizes and colours and can appear anywhere on the body. Birthmarks and other skin pigmentations are called naevus (nee vus), or naevi (like Levi jeans) if there is more than one of them.

Some of the most common types of pigmented birthmarks are café-au-lait spots, Mongolian spots and moles

Café-au-lait Spots
Café-au-lait spots, or milky coffee spots, are tan or light brown and are what many may think of as a typical birthmark. Somewhere between 20% and 50% of newborns have one or two of these. They will usually fade or get smaller as time passes and they may darken with sun exposure. Large, solitary café-au-lait spots are not often associated with any underlying issues.
However, small café-au-lait spots can be associated with many syndromes. If your child develops more than six of these before the age of 5, it is recommended that you get them checked by a medical professional.

Mongolian Spots
Mongolian spots are blue-grey and look a little like bruises. A Japanese idiom refers to Mongolian spots as having a blue butt and is a reference to immaturity or inexperience. Mongolian spots are more commonly seen in those with darker skin and often found on the lower back or bum. They can last for months or years but usually disappear by the time a child reaches their fourth birthday.

Moles
There are different types of moles or melanocytic naevi. Melanocytic means that it is made up of cells that produce melanin, the pigment that gives dark skin its colour. The type we’re interested in today are those that are present at birth – the congenital ones. Congenital melanocytic naevi, or moles that are present at birth, can be brown or black and range in size. Most moles of this type grow smaller and less obvious with time, although puberty can cause them to darken and become bumpy.

BONUS FACT
Most birthmarks are not hereditary and cannot be passed down from parent to child. However, there is one type of birthmark that is and it is called a silvermark. A silvermark is a silver streak of hair commonly found on the left or right side of where the forehead and hairline meet. They generally appear later in childhood and, in times past, have been both coveted and undesired – sometimes being referred to as a witch’s streak!

Salmon Patches
Salmon Patches are medically known as naevus simplex and otherwise known as angel kisses, stork bites and vascular stains. They are normally found from the neck up, with the most common places being the forehead, eyelids, nose, upper lip and back of the neck. Salmon patches are blotchy pink or purple marks caused by dilated capillaries near the surface of the skin. They are the most common type of birthmark, found on around a third of all newborns. Salmon patches usually disappear within the first 18 months and it’s thought that more than 95% of them lighten and fade completely. However, the back of the neck ones – the type that coined the term stork bite – can stick around for longer and sometimes become permanent.

Strawberry Marks
Strawberry marks are medically known as infantile haemangiomas and are raised red marks that can appear anywhere on the body. If they occur deep within the skin they can sometimes appear blue or purple. They affect about 5% of babies and girls are more likely than boys to get this type. Strawberry marks can be quite alarming to some as they grow rapidly for the first 6 months, before shrinking and disappearing at around 7 years old. If strawberry marks grow too rapidly or cause issues with vision or feeding, treatment may be needed.

Port Wine Stains
Port wine stains are flat red or purple marks that can vary in size. They are medically known as capillary malformation and only affect a small number of babies. They often affect one side of the body and appear on the face, chest and back. In many cases, they respond to the hormones associated with puberty, pregnancy and menopause. They can deepen in colour over time and most port wine stains are permanent.

It’s still not understood what leads to birthmarks. But we can tell you that there is no truth to many of the old wives’ tales surrounding birthmarks – Scratching yourself whilst pregnant and not fulfilling cravings will not give your child a birthmark, strawberry cravings or overindulgence will not lead to strawberry marks and if you are more easily startled or scared during pregnancy you will not increase the chances of your child having a deep red birthmark.

It can be a shock for parents when they first see a birthmark on their newborn. But be rest assured, most birthmarks are harmless and will disappear in time. If you are in any doubt, you should always consult a medical professional. For those birthmarks that don’t disappear there are treatments for those that want it, such as the use of lasers, that help minimise their appearance. And remember, babies that are born with a birthmark are in the majority, it is just another element that makes them completely unique and beautiful.