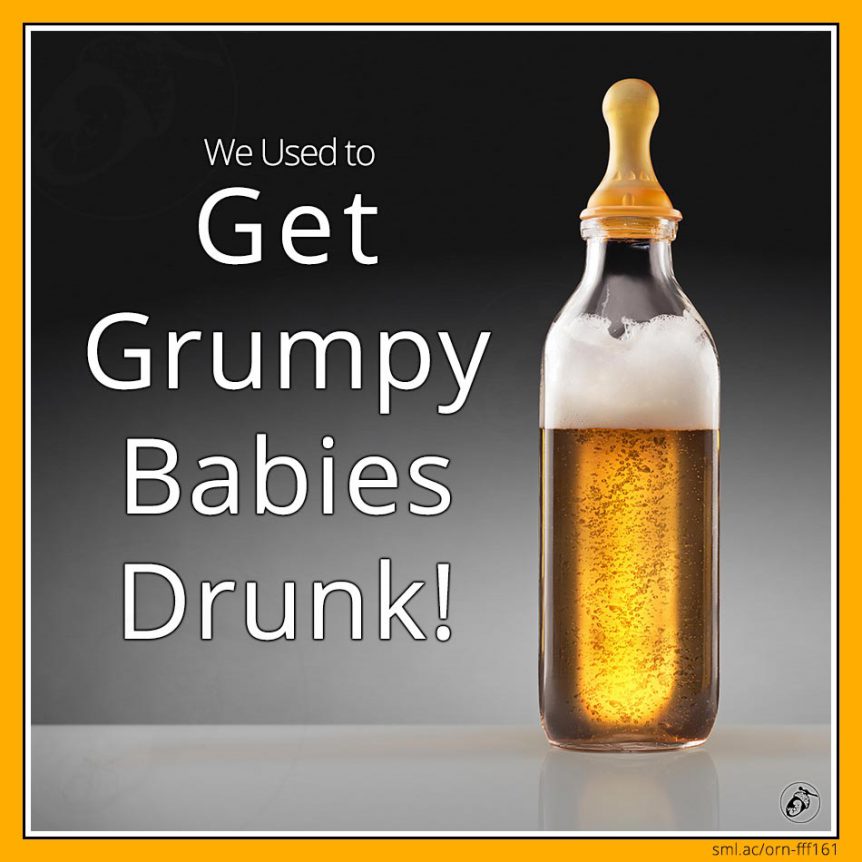 We Used to Get Grumpy Babies Drunk!

This week we’re looking at booze, how it found its way into medicines for our children and why it wasn’t the ingredient that was actually doing the soothing. We also find out exactly what colic is and look at a drug they gave to children when they were scared or nervous at the doctors. A drug that is currently used in assisted suicide and to administer the death penalty!

If teething is on your radar it can be really helpful to know when each tooth is likely to erupt. That’s why we have a really easy teeth arrival chart that we made just for you. It’s free and available for download!

This is our 6th instalment of our teething series. So far we’ve found out when teeth first arrive, that we thought teething caused death and that we treated teething with opium, mercury and cocaine.

Alcohol has been used to “quieten” fractious and teething babies for centuries. And it was freely available on UK shelves, in the form of a non-prescription baby medicine, until the mid-1990s. That same medicine was banned in the US in 1982 because it was considered a drug and unsafe.

It was reported that in some parts of Britain, circa 1990, that over 60% of babies were given this medicine before they reached a month old. Sounds similar to the epidemic of opium use in babies that we covered a couple of weeks ago.

First formulated in 1851, this alcoholic medicine came at a similar time to many other drugs designed to soothe babies. But, unlike opium that fell out of favour by the 1920s, and mercury in the mid-1950s, alcohol in baby medicine stuck with us until the 1990s.

BONUS FACT #1
Pentobarbital is a drug that is used to help in assisted suicide and to administer the death penalty. It was also available in the 1930s as a suppository for anxious children under the name Nembutal. Nembutal was marketed as an excellent drug to use “when little patients balk at scary, disquieting examinations” and “when they’re frightened and tense.”

This alcoholic “baby quietener” was called gripe water. Gripe water was first formulated by William Woodward and contained dill oil, sodium bicarbonate, sugar, water and 3.6% alcohol. Whilst this was the first version of gripe water, it wasn’t an original formula. The formula was borrowed from physicians of the time who were using the solution to combat malaria.

Woodward’s Gripe Water increasingly became the bottle of choice for mothers. Over the ensuing decades, the competition gradually fell away. Their reliance on illicit ingredients enabled gripe water to steadily take hold. It became the last of the Victorian remedies left standing – the cure-all for irritable babies, including those who were teething.

Other gripe waters jumped on the bandwagon. Their formulas varied, in ingredients and alcohol content, with some of them containing over 9% alcohol. There were even reports of adults becoming addicted to gripe water.

It was thought that alcohol was the ingredient providing its soothing effects. But it’s far more likely to be another ingredient, sugar. Sugar is an analgesic, especially in babies, something we discovered back in week 51.

It was the sugar that was soothing the baby and causing the abrupt behaviour change that made parents think it was so effective. However, sugars effects are short-lived and alcohol was the thing that kept babies subdued and docile.

Due to public pressure in the UK, alcohol was removed from Woodward’s gripe water and the sugar was replaced with a sweetener.

That change didn’t tarnish gripe water’s mythical status or the memories of expectant grandparents. Back in London’s Olympic year (2012), the UK saw a shortage of this now, formerly alcoholic tonic. And mums were freaking the F out.

Trail through the many parenting forums and you’ll find discussions about giving soothing remedies (or should that be “quietening remedies”) to babies just weeks old. There are the usual suspects – anti-colic “anything”, gripe water, and then plain old booze.

Keep your eye on our FFF’s as we will be paying more attention to colic and the raft of BS “medicines” that this term has given rise to.

Alcohol and babies do not mix well. Babies are far more susceptible to alcohol’s effects – its effects on breathing, heart rate and blood pressure. Alcohol is a central nervous system depressant and, in its extreme, it can cause death. And for young children, the amount of alcohol they can tolerate is far, far lower than many realise.

It is noted that the single maximum recommended dose of Woodward’s Gripe water, with its 3.6% of alcohol, would be the equivalent of five tots of whiskey to a 4 kg (8.8 lb) infant!

Now imagine that you’ve got no tolerance to alcohol, that your body doesn’t yet know how to effectively deal with alcohol, and any ability that it does have is limited. How might alcohol affect you, how long would it effects last and how you would feel?

Gripe water has left us a legacy of alcohol being a miraculous baby soother, that is still alive and well today. Whilst this over-the-counter remedy may have changed, in the UK at least, it is still far too easy to quieten your baby. Whilst alcohol no longer has “for babies” on the packaging, is it likely to stop some desperate or unwitting parents?

For many parents of teething babies, having a good whiskey on hand may be of benefit. Just make sure it’s for you, and not for your little one.