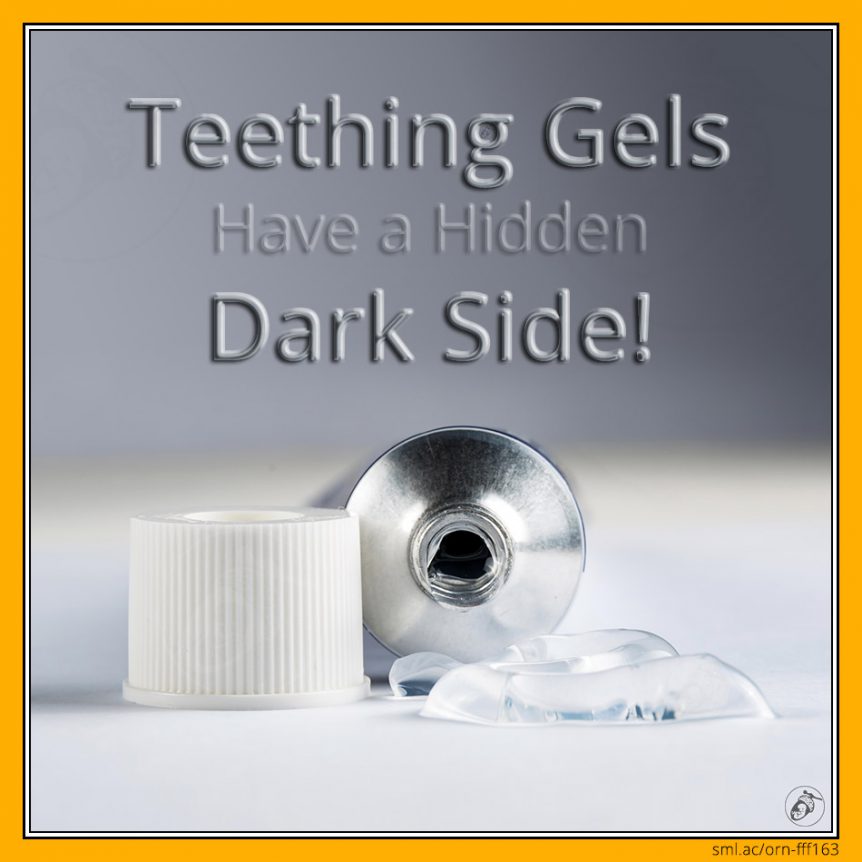 Teething Gels Have a Hidden Dark Side!

Teething gels are not all the same and this week we’ll discover what makes some of them dangerous for our teething offspring, why the current ones are similar to those of old and why modern teething gels seem to be following the same direction as opium for babies did.

It’s the 8th week of our teething series…

Why are we still banging on about teething?

Said, nobody! Because everyone has experienced it and some lucky parents get to experience it multiple times. If you’re one of those parents, knowing when those little ivories are expected can make things somewhat easier. That’s why we made a really easy teeth arrival chart for you to download completely FREE here.

If you peruse your local supermarket or chemist’s shelves looking for teething remedies, you’ll find there are three types – homeopathic, herbal and topical anaesthetics. I would also add a fourth – sweet ones.

Homeopathy is a deep, dark, hole that we’re going to swerve this week, along with the herbal teething remedies. But, stay tuned because we get to those next week. Today we’re going to focus upon the teething gels that contain anaesthetics. However they aren’t any old anaesthetics – they are our old friends from week 160 – the Caine family.

Caine-based anaesthetics came to be, because of cocaine’s popularity circa 1900. As an aside to its stimulating effects, it also had great numbing effects. Chemists set to work in a bid to gain the numbing benefits of cocaine without its addictiveness and other less desirable traits. And in 1905 Procaine (AKA Novocaine) arrived and started the family of Caines that now has more than 40 members – not including the brand names.

Teething Gels get results in two ways. They either numb the gum with a topical Caine-based anaesthetic or they contain something sweet that acts as an analgesic for little ones.

Caine-based anaesthetics are found in over-the-counter teething gels. Benzocaine is still available over the counter in the US and Lidocaine here in the UK. However, due to safety concerns, both have recently seen far more rigorous controls come into place.

In May 2018, the US Food and Drug Administration (FDA) stated that benzocaine products are a serious risk to children and infants and stated that they should be taken off the market. They will still be available whilst stocks last – in February 2019 they are still available.

BONUS FACT
This isn’t the first time that teething gel has been under fire. 2008 saw a return of Reye’s syndrome. Reyes syndrome is a condition that causes swelling of the liver and the brain. It is something that had disappeared since the 1980s when aspirin use for babies was stopped. The culprit was an ingredient found in teething gels called choline salicylate (sally cill ate). Thankfully that ingredient is now only available in medicines for over 16s.

The FDA also put out a warning about lidocaine in 2014 and required black box warnings of its risks – the most serious of its type. This was due to 22 serious adverse reaction and 6 deaths due to lidocaine. The UK has only recently adjusted its own regulations.

As of the 1st January 2019, all newly manufactured teething gels containing lidocaine will only be available from behind pharmacy counters. But, there will be a lag between the remaining old stock being sold and the new stock taking over. This can take years in some instances.

In December 2018, the Medicines and Healthcare products Regulatory Agency (MHRA) said that lidocaine-based teething gels should only be used with guidance from a healthcare professional. They have stated that their review showed a lack of evidence showing any benefit to using teething gels.

It’s thought that this statement may have been prompted by FDA reports of lidocaine-causing seizures and deaths. The MHRA responded to this report and said that the products sold in the UK are less strong than those available in the US, so the side effects carry less risk.

That takes me back to week 158 – In a bid to keep opium available as a baby soother, manufacturers moved from a stronger version to weaker ones. Tincture of opium (AKA laudanum) and the morphine-based, Mrs Winslow’s Soothing Syrup, became outlawed and in trotted Paregoric to take their place. Paregoric was a more dilute opium tincture that stuck with us until the 80s.

The use of lidocaine will still be available in the form of teething gel in the UK, albeit not as easily obtained as before. There have also been swift withdrawals from some larger companies of Caine-based teething gels for infants in both the US and the UK.

The US saw Orajel discontinued as a result of the FDA requirements of May 2018. Orajel’s byline was “Instant Relief for Teething Pain” – Eerily similar to the byline for cocaine toothache drop’s “Instantaneous cure”.

The UK saw Bonjela making their move slightly ahead of the curve – if you can call it that. They removed their lidocaine-based teething gel from the market – citing it as a business decision. A business decision that happened to occur just 3 months before the MHRA’s new guidance. Hmmmm…