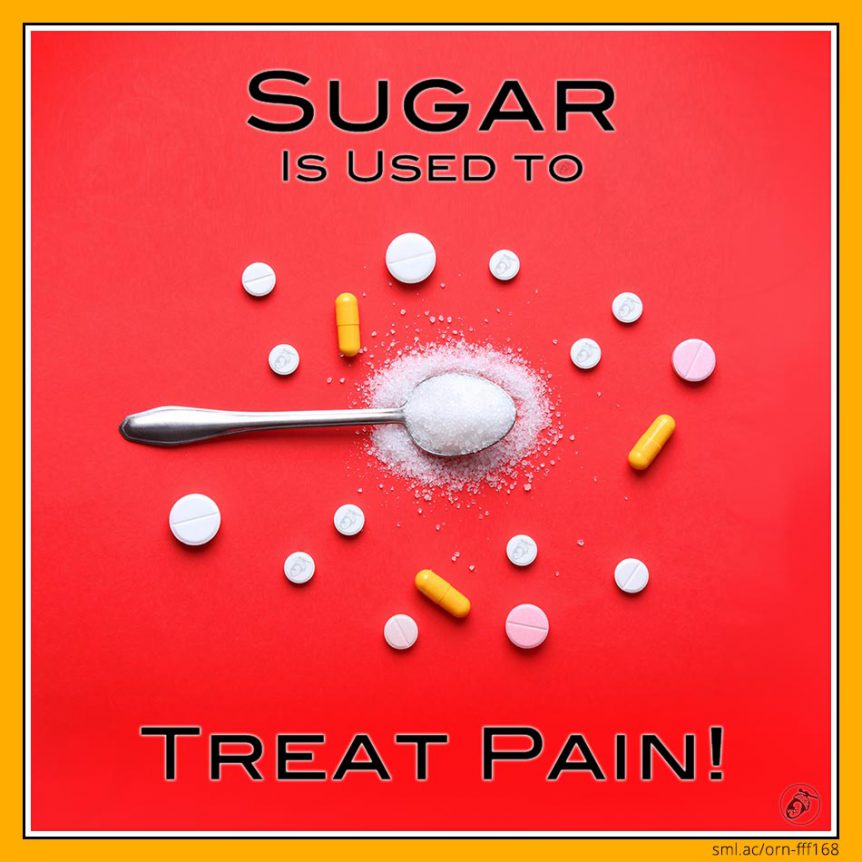 Sugar Is Used to Treat Pain!

This week we’re looking at a type of ingredient found in nearly every infant medicine, that also has pain relieving qualities. Yet, their effects are never mentioned on the packaging and are often attributed to other ingredients.

Are we giving credit to the wrong ingredient?

This week we’ll explore this question in more detail and discover that this ingredient is one of the most studied and widely-used pain interventions in newborn care today.

This week we’re looking at teething… No, not really! We think 12 episodes was enough! If you didn’t see them, then go check them out.

In that teething series, we skirted over something called “sweet-induced analgesia” and how it may be causing the apparent effectiveness of teething medicines. This week we’re going to look at it in more detail and how sweetness can be as effective, and in some circumstances, more effective than some supposed pain-relieving medicines.

This isn’t the first time that we’ve looked at the use of sweetness as an analgesic (pain relieving medicine). Way back, in week 51, we discovered that it’s common practice to give newborns a sucrose solution (table sugar and water). We also noted a review of over 74 studies that included over 7000 participants. That review showed that sucrose was effective pain relief for heel pricks and injections into both muscles and veins. It also noted that it was not effective pain relief following circumcision. There was conflicting evidence for other minor painful procedures and they stated that more research was necessary.

There are over 150 published studies looking at sweet-induced analgesia and sweet-induced calming. 100 of those 150 included the use of sucrose. Sucrose is one of the most extensively studied pain interventions in newborn care.

Nevertheless, with all that information, sweet-induced analgesia is still not fully understood. And then, there are other studies that would suggest it may be less effective in neonates than we initially thought.

One such study, of 44 babies, used an electroencephalography (EEG) cap to measure brain activity, instead of using an observational pain score. An observational pain score uses video recording to ascertain facial expressions, such as grimacing, behavioural changes and physiological measurements, such as their oxygen use. That study showed no apparent benefit to the use of sucrose when compared to a placebo.

Sweet-induced analgesia has a pretty short effective time when compared to typical analgesics such as paracetamol (AKA acetaminophen). This can be a positive point, especially when it comes to short invasive procedures such as heel prick tests and taking blood in infants.

Exactly how long sweet induced analgesia lasts is widely debated. The most common answer appears to be around 2 minutes. However, the results from studies vary wildly. A study looking at babies aged between 5-7 weeks old stated that its effects lasted around a minute. Yet, in another study looking at newborns, its effectiveness was thought to last up to 45 minutes.

BONUS FACT
One study pitted two forms of sweet-induced analgesia – breast milk and glucose. They conducted it during the heel prick test. A 30% glucose solution vs breastfeeding. Breastfeeding came out on top, being 1.5 times more effective than the glucose solution.

The thing that we found the most fascinating about sweet induced analgesia is that it’s not just restricted to sugar. It can be any sweet solution, including those that only contain artificial sweeteners. A more suitable term for this effect would, therefore, be “sweet-taste-induced analgesia” or just “sweet-taste analgesia”.

As wonderful as this type of short-lasting analgesia is for infants, the amazing superpower of sugar doesn’t stop once we pass infancy. It’s fairly well established that sweet-induced analgesia can be just as effective in children up to a year old, but some studies are showing it could be much longer.

One of those studies showed that it was especially effective in those children with a sweet tooth. It looked at the pain tolerance of children aged 5 -10 using something called a Cold Pressor Test. The cold pressor test involves immersing a hand into ice cold water and leaving it there for as long as possible. Doing this gave the researchers an indication of pain thresholds and tolerances to pain. The study showed that the sweeter the tooth a child has, the more effective sugar was in prolonging the amount of time they could spend with their hand in ice cold water.

So, how does sweet induced analgesia work?

The short answer is: Nobody really knows!

The long answer is: There are a few theories. But, nothing conclusive.

Some simply suggest that stimulating the taste receptors may simply induce a feeling of comfort – something that is hard to measure and quantify.

Whilst others pose that sweet taste triggers the release of natural opioids. As yet, this hasn’t been proven in human studies, but it has been proven in rat studies.

Yep! Rat studies have been responsible for tonnes of breakthroughs in brain research. And we’ll be looking at one particular rat study next week. A study that proved just how addictive sugar is – more addictive than one of the most abused and addictive drugs known to man.

By far, the most heavily weighted research around sweet-induced analgesia has been in and around neonates or those younger than 4-weeks-old. However, the inconsistencies in evaluating the effects of sweet-induced analgesia are widespread and there are a whole host of gaps in its knowledge. It is clearly a field that needs more research.

The downsides of using sucrose in infants are pretty low. Yet, the upsides very high.

Lack of appropriate pain management for newborns has been shown to have long-lasting effects – effects that are measurable well into their teens.

But, how long it lasts or the risks involved, may not be the most important questions to ask.
With sweetness being used in pretty much every infant medicine on the market, the more pertinent question to ask may be: “What is causing the effects we witness when giving our children medicine?”

Is the effect caused by the active ingredient or is it just sweet induced analgesia?