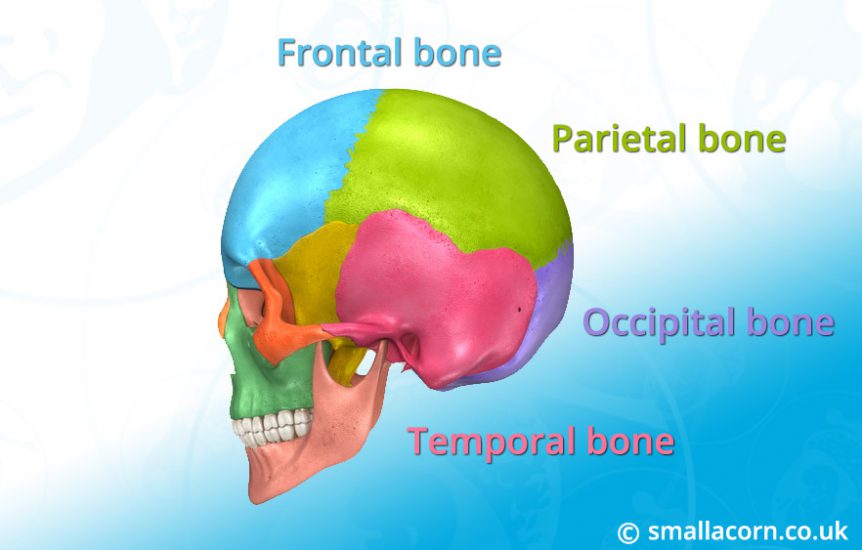 Babies’ skulls comprise of six separate bones (the frontal bone, the occipital bone, two parietal bones and two temporal bones) and are held together by strong, stretchy tissue called cranial sutures. At birth, the separate pieces are able to overlap and allow a baby’s head to fit through the birth canal and during infancy, they protect the brain from minor impacts to the head and allow the brain to grow. Without the flexibility that the cranial sutures provide, a baby’s brain could not grow enough and brain damage would occur. The protein that prevents these plates fusing together is called noggin, we looked at noggin way back in week 9.

Amongst the six growth plates are two spots where the skull is only covered by cranial sutures and no bone is present. These soft spots are called fontanelles. The anterior (front) fontanelle is located on the top of the middle head, just forward of centre and usually closes between 9-18 months of age. The posterior (back) fontanelle is found in the back of the middle head and usually closes within the first couple of months – it may even already be closed at birth.

As a baby grows towards 2 years old, the fontanelles will close and the skull will slowly fuse together – a process that will last many years, as the brain will not reach adult size until around seven years old.