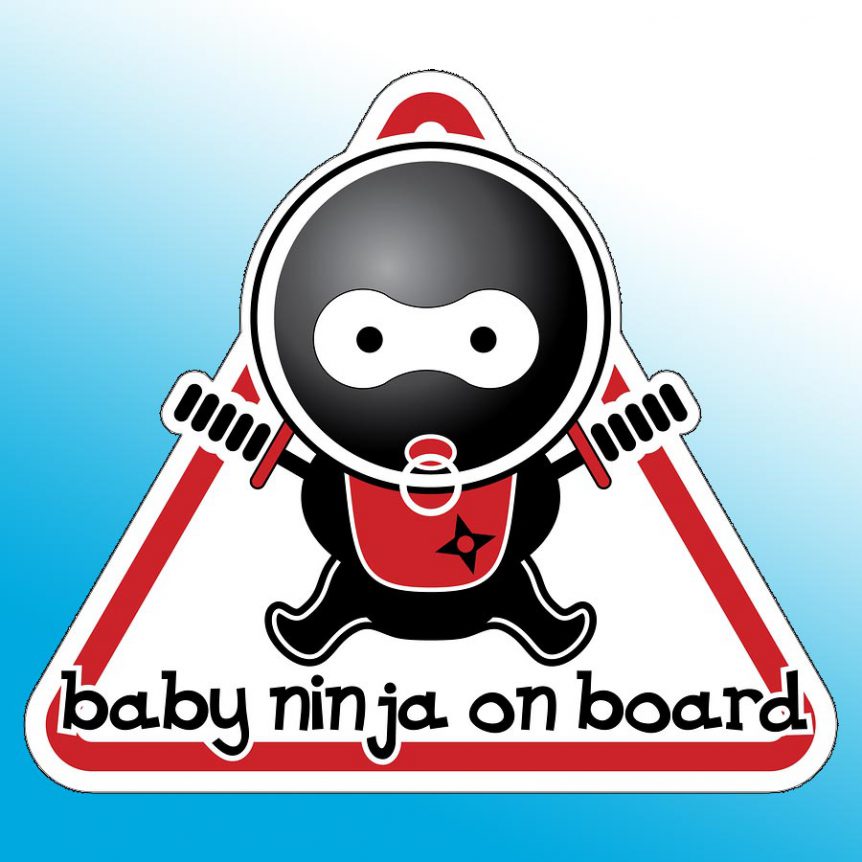 The palmar grasp reflex in week 24; “A Newborn’s Grasp is So Strong, It Can Hold Its Entire Body Weight Whilst Hanging from Its Arms”

The parachute reflex in week 37; “Babies Can Skydive!”

The Babkin reflex in week 46; “Pressing a Baby’s Hands Can Open Their Mouth!”

And the swimming reflex in week 64; “Babies Can Swim at Just a Few Days Old!”

This week is no different – we’re looking at the asymmetrical tonic neck reflex (ATNR). The name makes it appear more complex than it is – it means a non-symmetrical (asymmetrical), muscular contraction (tonic) reflex resulting from movement of the neck. This reflex is initiated by turning the baby’s head to the left or right, whilst the baby is lying on its back. When the head is turned to the right the right arm and right leg straighten, whilst the left arm and leg bend. The opposite is true for the left side.

I imagined this position to be like a flying ninja, the first time I read that! A bit like this:

Unfortunately, as is usual with babies, subtlety is king. The movement is far less dramatic and more closely resembles that of a fencer. Because of this resemblance, it is often referred to as the “fencing” reflex… en garde!

The ANTR develops at around 18 weeks after conception and should be fully present at birth. Whilst in the womb, it helps develop muscle tone and the vestibular system ( the sensory system that controls spatial awareness and balance) and at birth, it appears to assist the baby’s active participation in the birthing process.

Because this reflex moves the hand in conjunction with the head, it helps to develop the connection between touch and vision, establishing depth perception and hand-eye co-ordination. Once a baby’s hand-eye relationship is established, the ATNR functions to fix vision on anything that catches their interest – thus enforcing depth perception even more.

By 6 months old, the ANTR becomes integrated and babies gain the ability to bring their arms into the midline, where they can reach for mum’s face and anything else within the midline of their body.

In some children, the ANTR can be retained and cause a long list of issues with development, most notably the association with dyslexia and attention deficit disorder. For more information and a more comprehensive look at retained ANTR, check out “this informative page”.

Here’s a video of the asymmetrical tonic neck reflex in action: