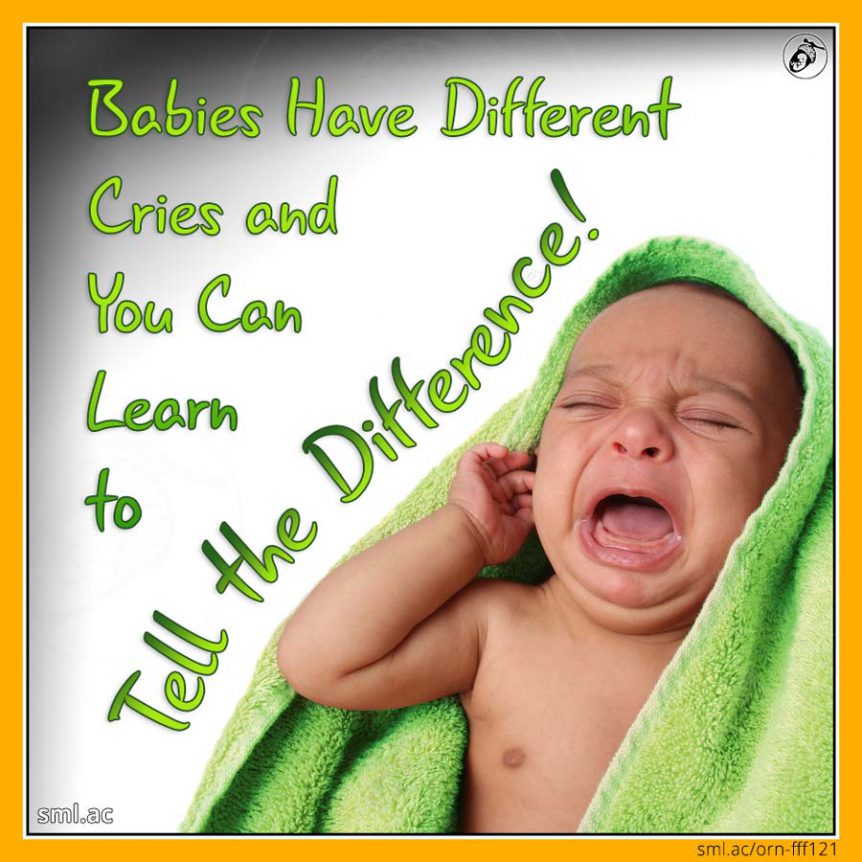 We all know what a crying baby sounds like, but did you know that if you listen to them before they go into full-on “I need help, right the fuck now” mode, you can usually figure out what they need.

Way back in August 2014 we covered this subject in one of our very earliest blog posts called Your Baby Can Talk. In that post we looked at both cries and body language that babies use, to tell you what they need. We also shared our limited experience from the first few months with our newborn. Today we’re revisiting the cries, in part because it deserves more attention, but mostly because the effort needed to unleash your inner baby whisperer and discover your baby’s needs are minimal.

One thing that many people miss is that babies can tell us everything we need to know if we just listen to them and don’t attempt to do their thinking for them. There are to great tools for doing this, one is body language and another is listening to and understanding their different pre-cries, something discovered by a woman called Priscilla Dunstan.

Priscilla Dunstan has something, often described as an audio version of a photographic memory – so instead of remembering everything she sees, she remembers everything she hears! At the age of 5, she was able to recite a piece of Mozart, note for note, having only heard the piece once. As she grew, she was able to pick up on patterns within sounds that no one else could hear and this amazing skill became incredibly helpful when she gave birth to her son.

She spent the early weeks and months listening to and learning her son’s language, but upon exiting her fourth trimester* bubble she realised that her son’s language was not unique and other children made the same sounds too. Fast forward many years to a research project with Brown University, and having heard thousands of different babies cry, she was able to find the common sounds that all babies make. Her experience and research led her to break these down into 5 easily remembered sounds, something she coined as Dunstan’s Baby Language or DBL.

So what the hell is a pre-cry? A pre-cry is a sound and a reflex combined – for instance, there is no language barrier when it comes to understanding burps, yawns, sneezes and hiccups. The same goes for babies’ pre-cries – they are all sounds made with reflexes, so whilst they may differ in the way they are enunciated, they will have a fundamental similarity in sound that can be easily learnt and understood.

NEH
This is the sound for hunger and is caused by the sucking reflex (114). This is caused by the tongue creating a sucking movement that causes the nnnn sound. Look out for the N sound in particular, within their cry.
EH
This sound tells you that there is upper wind. This would indicate that your child needs winding or burping. The reflex is the chest trying to release the wind. Priscilla has noted that sometimes you may hear your little one making this noise while they’re asleep and that you can often wind them without waking them.
HEH
Heh is the sound of discomfort. This is a reflex of the skin that you may hear when they are too hot or cold, when their nappy needs changing or when their clothes may be too tight or uncomfortable.
OWH
Owh is the sound for tiredness and the reflex that causes this sound is a yawn. It’s quite a characteristic cry and means that your little one now needs help to go to sleep.
EAIRH
This sound indicates that your little one has lower wind. This is caused by a reflex in the lower intestines pushing down. The key part of this sound to look out for is the R part of the sound.

You can also get different combinations of sounds and the rule of thumb that Priscilla gives is to lead with the dominant sound. But there may be times (if you’ve trained your ears well enough) when you might be able to take advantage of combinations, for example, NEH and OWH together may mean that they want to go to sleep sucking on something.

The ideal time to hear these sounds is at the stage when your child is calm and vocal, often a time where some think they’re just making cooing noises, finding their voice or “being noisy”. That may well be the case some of the time, but if you take the time to train your ears, you may start to realise these pre-cries are often different and all too often, very specific. The problem is that by the time they’re already crying, you’ve lost your opportunity to listen and the sounds become distorted and far harder to figure out.

Dads, this is the perfect way to help out and you can easily practice well before your little one has arrived. In an attempt to train my ears whilst Bev was pregnant, I got the DBL Baby Ears app. I used to play a game that tested your ability to tell the difference between the cries, it took a while to get there – but once you get there, it becomes far easier to distinguish the different sounds. Most family members thought it was just a fad and I’d move onto the next new baby thing as soon as I got bored, I think Bev did too.

Bev changed her mind whilst sitting with me in an audience for a talk at a baby show. A baby sitting on its mothers lap, across the stage from us cried with a Neh sound, I whispered “Hungry!” and, almost as if its mother had heard me, it was promptly fed. Ten minutes later, the same baby made an EH sound and I whispered “Needs burping!” and again, as if by some sort of telepathy, its mother started winding the baby. After that incident, Bev rolled her eyes at me far less!

If You Don’t Use Them, They Lose Them!

These sounds disappear as a baby grows past 3 months old, but if you respond to them they can continue for far longer – for instance, the Neh sound will disappear with the sucking reflex at around 3-4 months old if it is not responded to, but if the sound is responded to they will continue saying it for far longer.

Many of us have heard the line “They can’t be hungry or have filled their nappy again, I only did it X number of many minutes ago”. Have you ever finished your food and wanted a drink 2 minutes later? Have you ever gone to the toilet and decided to go again, 5 minutes later? Your little one is no different, hence the earlier reference to not attempt to do your baby’s thinking for them – Instead, practise how to hear them – they can tell you all you need to know, you just need to listen.