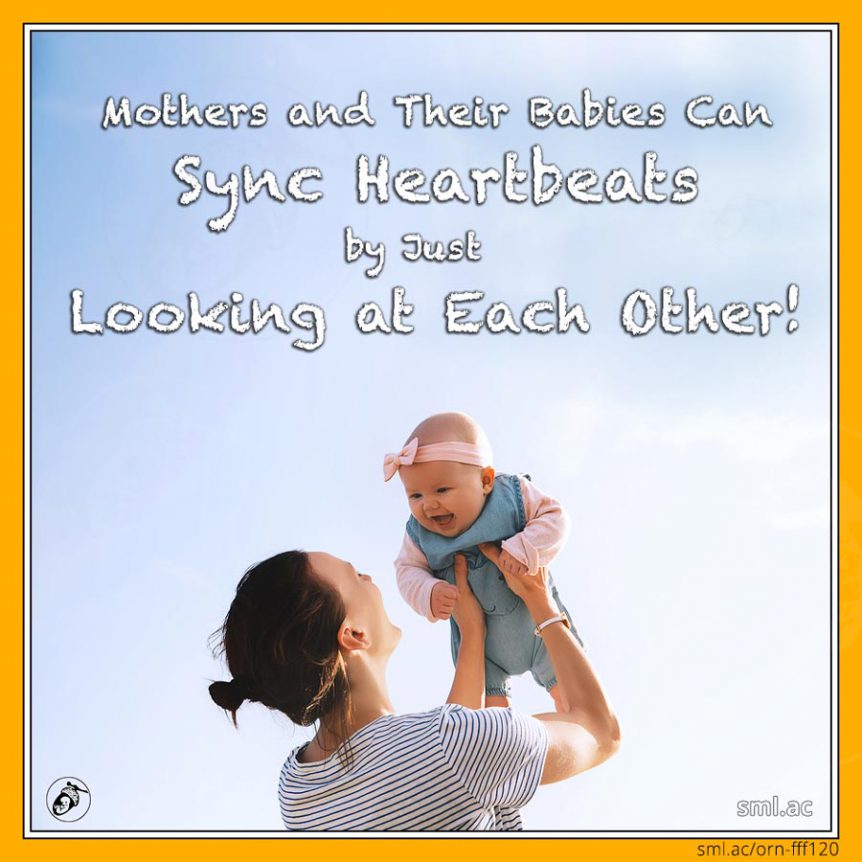 Who can resist cooing at a newborn – staring into their eyes and making silly noises? Not me! The mother-child bond strengthens throughout pregnancy and with the boost in hormones that pregnancy brings, the mother and baby bonds are formed and ready for their “Birth Day”. When it comes to mothers cooing at their newborn bundles of cuddliness, there’s an amazing perk that shows that bond in action…

Babies’ hearts are amazing little organs – they start beating at only 3 weeks post-conception (week 88) and they may have beaten over 60 million times by the time baby is born (75). Babies can also vary their heart rate in response to their mothers whilst in utero and can even synchronise their heartbeats to match too, but only if she tricks them into doing so.

Using a device called a magnetocardiograph, some computing power and some rhythmical breathing by the mother, Scottish and German scientists in 2010 were able to make this exact discovery. This synchronisation only happened when the mothers breathed in-sync with a computer-generated clock, and they found that babies can sense the rhythmical shift in a mother’s heartbeat and adjust their own accordingly. This was the first time there was hard evidence to actually show a mother’s bond with her child, and its discovery could help indicate anomalies or signal that something is wrong during development.

In another study, the one that inspired today’s Fun Fact, they set out to look at the impact upon the heart rates of new mothers and their 3-month-olds when they spent time face-to-face. During the study, they monitored the heart rates of both the mothers and their 3-month-olds over the course of a 3-minute interaction. They also filmed each 3-minute interplay so that they could compare its different aspects. They were then able to coincide the heart rate variances with the different types of interactions, such as facial expressions, body movements and vocalisations.

After analysing the footage and syncing it with the recorded heart rates, they found that a mother’s and her infant’s heart rates synchronised during their face-to-face collaboration. The mother’s heart rate became more like her baby’s and her baby’s heart rate became more like its mother’s. But that’s not all! They also found that when mums and babies were focused intently on one another (looking right at each other’s eyes, vocalising etc.) their heart rhythms were even more coordinated and it all happened with less than a second’s lag.

It’s worth noting that this cardiac coupling only happened between mothers and their own children. But what about dads? Unfortunately, there have yet to be any studies looking into the attachment between fathers or other primary caregivers and their babies.

The amazing thing about this type of heart rate syncing is that it is something completely unique to humans. For heart synchronisation to occur in other animals they would need physical contact and touch, which as you may remember from week 109, is as important as food and water to infants.

The results from this study would suggest that if you or your baby is stressed, that you have the ability to quite literally calm each other down – by actually causing a physical change upon the other’s heart rate, and it’s also why an upset baby can be calmed by just seeing its mother..

Looking at your child and spending time doing so is something that is expected and also hardwired into our physiology. Humans are hardwired to find faces, something that is key to survival and critical for us as a species, especially when it comes to socialising. Newborns are born with the ability to see the exact distance needed to see their caregiver’s face when held at chest level – it’s no fluke that the way babies feed, the way we carry them and hold them, that they naturally spend long periods in this position. It’s also another thing to add to the long list of benefits for babywearing. Touch and good attachment are essential to our little one’s ability to thrive and flourish, but unlike other animals, we have the ability to achieve heart synchronicity with our offspring – touch-free, in mere milliseconds, with simply an affectionate smile.