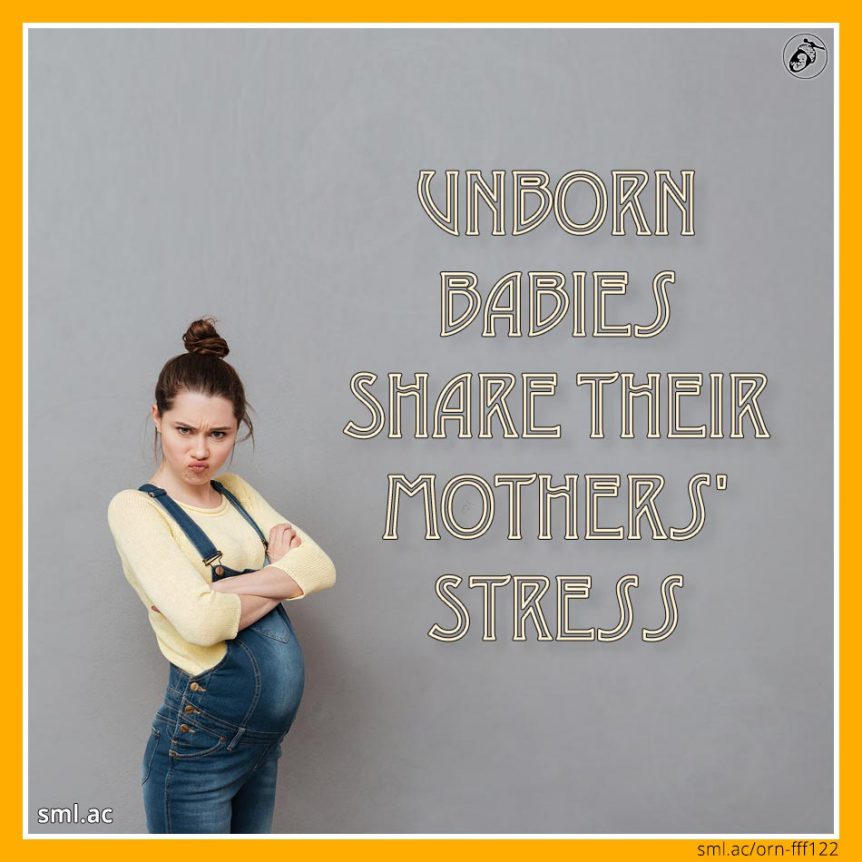 Stress is a familiar part of many women’s lives and many just make their pregnancy fit right in with the hubbub of daily life. But including stress in any pregnancy may not be the ideal thing for a baby, as you will quite literally be sharing your stress with them and even re-wiring their brain…

The placenta usually protects babies from the build-up of hormones that a stressed-out mother can make, but not all placentas and not all mothers are the same. All women will react differently to stress and the resulting hormone dump will vary from woman to woman. In addition to this, every placenta works differently, some provide great protection from the overload of stress associated chemicals such as cortisol, whilst others provide far weaker protection. Placentas are amazing organs in their own right – if a mother sustains a serious injury whilst pregnant they have the ability to transfer stem cells to help her heal (week 89) – and, at birth, they contain around 30% of the baby’s blood (100).

It was once thought that all babies were destined to follow a predetermined path based upon the genes of their mother and father, that from conception to birth all that was needed for a baby to thrive was enough nutrients and a low exposure to harmful substances. However, this is not the case.

As a baby grows, it is constantly checking-in with the outside world, trying to ascertain what it can expect once it plays an active role in it. Throughout its time in utero a baby it figuring out how best to construct itself, within the parameters of its genes, to give it the best chance of survival once born. When an unborn baby is exposed to stress for extended periods, it will quite literally build itself to deal with this kind of environment and once born will be at a far greater risk of a whole bunch of stress-related issues.

Some studies have linked stress in pregnancy to a baby’s temperament and neurological development. Those infants that experienced high levels of stress in the first-trimester show more signs of depression and irritability and whilst in the womb they are also slower to “habituate” or tune out repeated stimuli – a skill that, in infants, is an important predictor of IQ.

As yet, it’s not clear what stresses in particular play the largest role. Stress comes in many forms and could be as simple as heat stress from a long hot shower or a heavy session at the gym (check out the dangers of extended hot showers in week 112). There are many chemicals that are produced by a mother when she experiences stress and many can be passed through to the baby. For instance, when a woman is anxious her nervous system will stimulate the release of epinephrine (and norepinephrine) which are both stress hormones known to constrict blood vessels and restrict oxygen to the uterus.

Then there’s a recent player to the pregnancy stress hormone world – CRH (Corticotropin-Releasing Hormone). CRH is one of the more exciting recent discoveries as it could explain why women go into labour when they do. That’s right, modern medicine and science still don’t know why a woman goes into labour when she does! It has been shown that when CRH levels are checked at around 16-20 weeks into a pregnancy, they can predict when a mother will go into labour.

Now we can’t forget the daddy of the stress hormones – cortisol! Cortisol is known as “THE Stress Hormone” and the effects of consistently higher levels of cortisol throughout pregnancy can still be seen in children as old as 9. A study looked at this and the children that had been exposed to high levels of cortisol for prolonged periods of time whilst in utero. The effects were evident in their behaviour in toddlerdom – they consistently exhibited more fearful behaviours to stimuli and showed more fearful expressions than normal. By the time these children reached the ages of 6 – 9 years-old, MRI scans revealed larger than normal amygdalas – the part of the brain associated with the human response to frightening stimuli.

But as with most things, cortisol is not all bad – just bad in large doses for long periods of time. A pregnant mother’s cortisol levels naturally increase by two to four times, as it’s critical to regulating the maturing of a baby – especially things like its lungs.

It’s clear that how a baby develops in the womb sets its trajectory for later life – something known as foetal programming. We are also yet to fully understand the epigenetic changes that a growing baby will undergo when exposed to high levels of stress. This is the process of literally switching genes on and off, altering the way the genes behave.

The psychological condition of a pregnant mother – her levels of anxiety and stress as well as her personality – will ultimately affect the temperament of her baby once born. Unfortunately, it’s hard to avoid, as the baby will quite literally be awash in the chemicals its mother produces.

These changes would have made perfect evolutionary sense, but are far less helpful in our modern society. A baby exposed to higher stress levels would naturally be more fearful, vigilant and have a greater ability to detect danger – something that would have been protective in an environment where predators lurked and hostile neighbouring tribes existed. The changes that a baby underwent during pregnancy would have given it an advantage in a hostile world, yet, these changes are far less suited to our modern life.

It just goes to prove the adage we are often heard spouting – Whether you like it or not, you become parents the same day you become pregnant. Your parenting role in providing a secure, calm, relaxing, low-stress environment does not start the day the baby is born, but the day it is conceived.