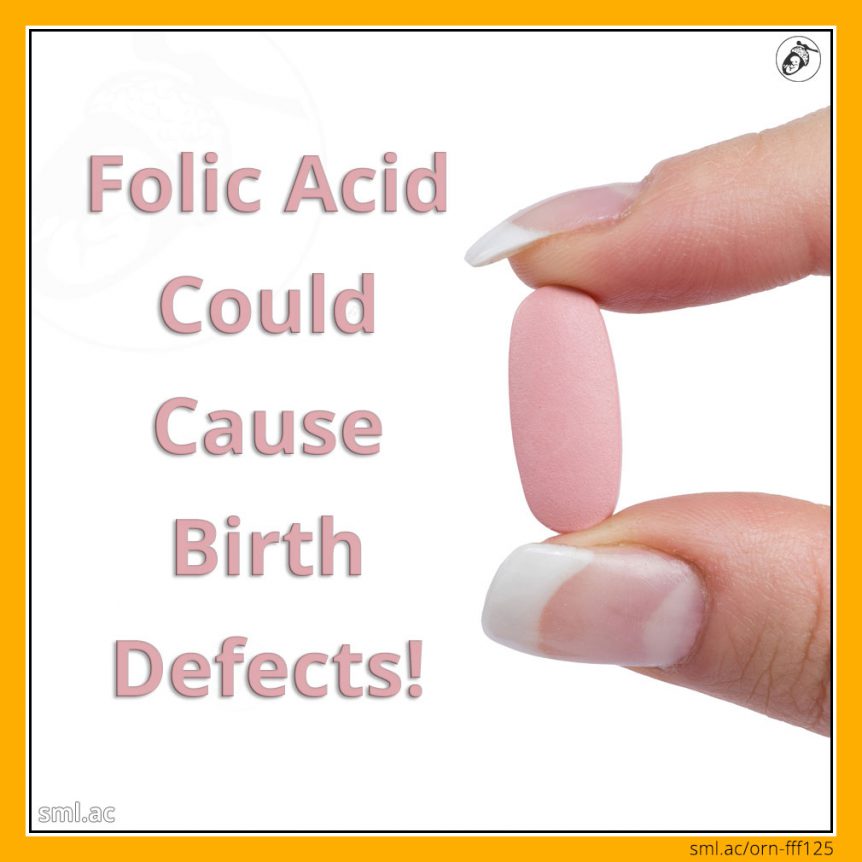 When you’re pregnant, one of the many things you’ll hear in repetition is to keep up your folic acid, it’s important to prevent neural tube defects. But what they don’t tell you is that it’s not folic acid that prevents them, but folate. The other thing that often gets unsaid is in relation to a particular gene mutation (that looks like a very rude word, so we’ll repeatedly mention it) and if you have this gene mutation, by taking folic acid you could effectively be causing the very thing you’re trying to combat – folate deficiency!

Grab a cuppa, get settled in, we’re diving deep in this weeks fact…

Folate, which is also known as vitamin B9, is essential in the formation of DNA in every cell in the body, allowing each cell to replicate perfectly. In addition to another B vitamin – B12, it’s also responsible for nerve function and the formation of red blood cells.

Folate is also super important when you’re pregnant, and insufficient levels are known to cause neural tube defects in developing babies. This is why many health professionals recommend that you supplement with folic acid. However, to metabolise folic acid, we need genes called methylenetetrahydrofolate reductase genes or MTHFR genes, and it’s because of the look of this gene’s acronym that we will henceforth refer to them as “motherfucker genes”.

There are currently 34 known motherfucker genes, but research to date has focused on just two of these – the ones in positions C677T and A12898C. A mutation in these genes has health implications, most notably during pregnancy.


So you may be asking, what is a neural tube and what happens if it gets a defect?

We all had a neural tube and it is the basis – or should I say WAS the basis, for what later became your brain and spinal column – your central nervous system. Your neural tube started out as a neural fold at about 3 weeks into pregnancy and a week later this fold began to fuse along its length to create the neural tube. * INSERT ANIMATION*

A neural tube defect (NTD) is when the fusing fails to fully complete – a baby’s spine or skull doesn’t form properly, or the spinal cord or part of the brain develops outside the body. The two most common types of NTDs are anencephaly and spina bifida. Anencephaly is when a major portion of the brain and skull are missing. This occurs because the rostral (head) end of the neural tube didn’t close. Spina bifida means split spine and the lack of neural tube closure occurs in the spine, the effects of which can vary in seriousness.

Folic acid supplementation has been shown to drastically reduce the incidences of NTDs. As a result of these findings, 81 countries since 1998 have introduced mandatory folic acid fortification of cereals – now we’re not talking breakfast cereals, we’re talking ANY processed grain used in food. It should be noted that the UK did not adopt compulsory fortification, although it is currently under pressure to do so. There are arguments both for and against mandatory fortification.

An argument for fortifying foods is to prevent NTDs because the time when folate levels are most critical is a time when the vast majority of women are unaware that they are even pregnant (remember, the neural tube closes at just 4 weeks into a pregnancy). In an average week in the UK there are 2 babies born that are affected by NTDs and 14 terminated pregnancies because of them. It is argued that compulsory fortification could, therefore, reduce these incidences because higher levels of folic acid would more likely be in a mother’s system when she needs it.

One argument against mandatory fortification is the subject of today’s fact, but to understand it we need to dive even deeper…

There are key differences between folic acid and folate. They are both types of the water-soluble B9 vitamin. However, that’s where the similarity ends.

Folate refers to a family of compounds that are found in leafy greens, legumes and many other fruits and vegetables. The name folate derives its meaning from the Latin term “folium” meaning foliage.

Folic acid is an inactive folate and can only be found in very small amounts naturally in food. However, it is most commonly consumed in its synthetic version and is used to fortify foods, such as wheat flour and breakfast cereals.

Folic acid is inactive and has to be metabolised or converted by our bodies – through 4 separate stages – to be transformed into its active form that our body can use.

These conversions require enzymes as well as some other genes for these processes to work.

So in short, for the body to use any folic acid found in food, it must go through these changes – Folic acid > DHF > THF > 5,10 methylene tetrahydrofolate > L-methylfolate

Folate, however, can either start at the same place as folic acid and go through the 4 processes or (and this is the kicker) SKIP THE ENTIRE PROCESS COMPLETELY!! Much of the dietary folate we consume is already in the active form, L-methylfolate, and can be used AS IS, without any other processes or conversion needed.

BONUS FACT – The first conversion from folic acid to DHF is a slow process. The reason is that folic acid was not found in any great quantities before its synthesis in 1945 and the process of converting folic acid into something useful became co-opted by the DHFR gene. The DHFR gene was originally responsible only for the second conversion from – DHF to THF – and is far quicker at doing so because that was its original purpose!

As a result, the motherfucker gene mutation can be linked to anaemia because of the importance of folate in conjunction with vitamin B12 in producing red blood cells. But most notably it could be the cause of those having trouble getting pregnant or suffering multiple miscarriages.

As if that’s not enough it gets worse…

Because those that have the motherfucker gene mutation cannot properly process folic acid, it is thought that it can build up in the body and can become attached to folate receptors, blocking them from receiving L-methylfolate.

So by taking folic acid when you have the motherfucker mutation, you are effectively blocking your ability to take in the active form of folate too. This could exacerbate and potentially cause folate deficiencies where none may have existed before adding the supplement.

Reports vary as to the number of people that have motherfucker mutations, some have reported that it could be as high as 1 in every 6 people! We’re only just starting to learn the full extent to which this can affect other processes and what additional issues the motherfucker gene mutation may cause.

Folate levels are critical to a developing baby and we do not suggest you avoid folic acid if you’re pregnant or trying to get pregnant. However, if you suspect that you may have the motherfucker gene mutation then you could look for a genetic testing service that checks for mutations in the MTHFR genes and you should consult with your healthcare professional.

For those of you that would be keen to stick to folate as much as possible, then there are supplements, including pregnancy and conception supplements, that state they have the active form of folate – L-methylfolate or 5-MTHF, and of course, there are also plenty of foods that rank high in folate – such as all types of dark leafy greens and cruciferous vegetables, asparagus, oranges, grapefruits, strawberries, beans, peas, lentils, avocados and many more besides.

Whether you have the motherfucker mutation or not, eating well should be part of your strategy for being healthy. So eat your greens, because we all want to be healthy motherfuckers!