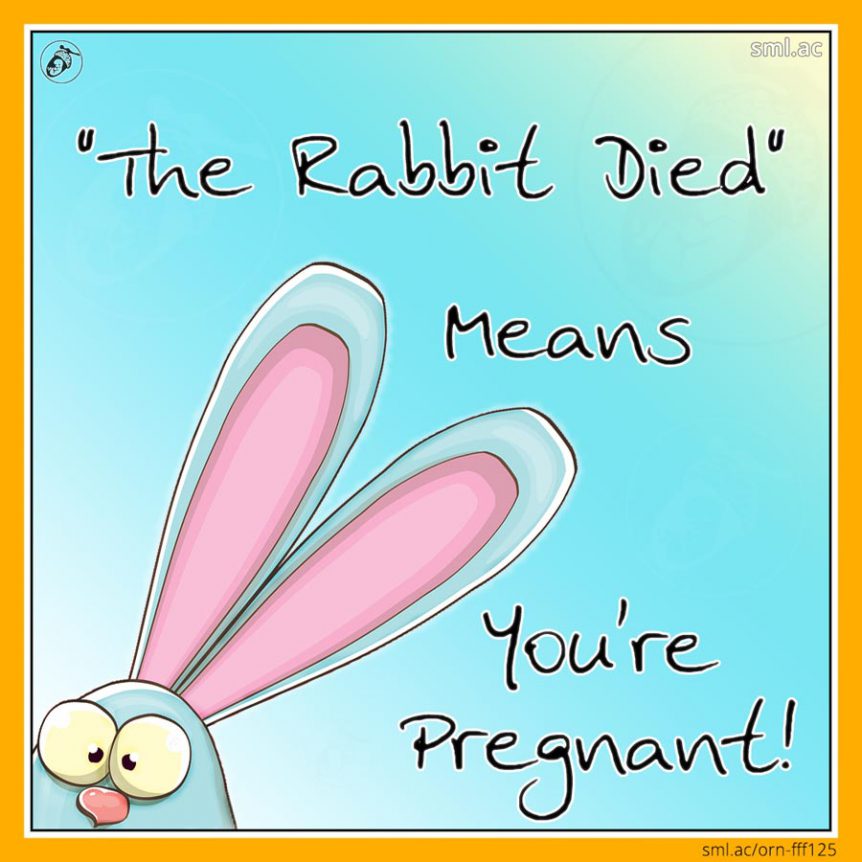 Nowadays you can grab a pregnancy test almost anywhere and test in the comfort of your own home, but this used to be something you could only find out by visiting your doctor. So you make the trip, but the very last thing you expect to hear is “Congratulations… The rabbit died!” WTF!! But if you were pregnant and it was the mid-1900s, this is exactly the type of thing you may have heard the doctor say.

Before women could pee on a stick to find out if they are pregnant, they had to go to some pretty long lengths – by comparison – to find out. They would have to make an appointment, then pay the doctor a visit, give them a urine sample, return home and then wait an anxious few days for the results of the test. The term “the rabbit died” stems from this very test, it was called the rabbit test.

The rabbit test, otherwise known as the Friedman test, was an early pregnancy test. In essence, the whole process involved a rabbit being injected with the woman’s urine and a few days later the rabbit was dissected and its ovaries examined.

BONUS FACT – This euphemism has appeared in the Aerosmith song “Sweet Emotion”, the TV series M.A.S.H and in a 1962 episode of The Dick Van Dyke Show.

In the 1920s it was discovered that a pregnant woman started producing the hormone human chorionic gonadotropin – or more simply, hCG. The rabbit test was used to find out if this hormone was present in the mother’s urine and if it was, then the hCG would stimulate a distinct change in the rabbit’s ovaries.

There was a common misconception that the rabbit only died if there was a positive result, however, this was not the case in the earlier versions of the test – the rabbit always died. However, later refinements made it possible to inspect a rabbit’s ovaries without having to kill it first – not sure if this was an improvement or not!

You may be surprised to know that this is exactly how we detect pregnancies today – just without the bunny butchery. Those “wee sticks” that we use today detect that same hormone discovered in the 1920s, hCG, and is what generates those little lines that many eagerly await.

There a many euphemisms and other terms for being pregnant and we thought we’d have some fun trying to list as many. Here we go…

If we’ve missed any, please be sure to let us know in the comments

We are now lucky enough to be able to perform pregnancy tests in the comfort of our own home almost instantly. Next time you need to find out if “the rabbit died” or if you’re “Pregcellent” you’ll be able to do it without harming a single animal, without multiple day waits and then can call your pregnancy whatever you choose, I’m sure we’ve given you a few ideas!