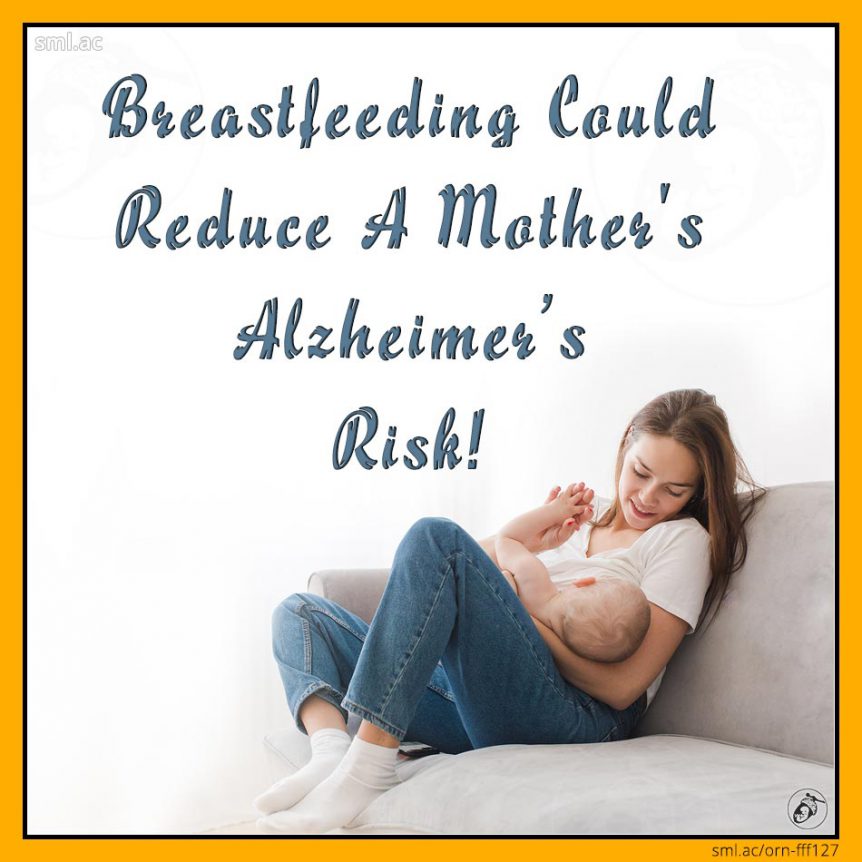 Breastfeeding carries lots of benefits to all parties involved. This week we’re looking at another added bonus that you may not experience for many years after your breastfeeding story ends…

Breastfeeding has many more purposes over and above simply providing sustenance. Whilst it is a panacea for babies, many of the common benefits fail to mention the long-term benefits to a mother’s health.

Previous weeks have been testament to our love of this precious liquid and in them we have found out that it can help regulate a baby’s mood (63), improve a babies memory and motor control (86) and can also give it wings – with a component that is shared with a famous energy drink (68). We’ve also discovered that because breastmilk contains the satiety hormone leptin and much like the Shreddies adverts of the 90’s, can “keep hunger locked up ’til lunch” (74). Then we’ve looked at the effects of breastmilk on a babies thymus gland, where it can cause it to more than double its size (77). The thymus gland is where types of white blood cells – called T-cells – go to mature and is critical to a healthy and fully functioning immune system. Then in week 103, we discovered just how important breastmilk is to a baby’s microbiome and how it uniquely feeds one type of very important microbe that is essential to help protect a baby’s gut.

Banging on about the benefits of breastfeeding is something we at Small Acorn are known to do fairly often, but we try to do it without the usual tussling, judgement and opinionated rants that are common around this subject. Whilst we think that breastmilk is a marvel of evolution, it is not always the appropriate choice for every family and it’s important that we never assume to know the reasons for others people’s choices. So without further ado, let’s crack on…

This weeks fact first hit the headlines back in 2013 when researchers from Cambridge University found a highly significant and consistent correlation between breastfeeding and Alzheimer’s risk in later life. Even when including other confounding factors – such as age at first birth and age at menopause, her smoking and drinking history – the results were no different.

Alzheimer’s is a devastating disease that affects entire families and has been called a living death because it robs its victim of everything that made them who they were. Alzheimer’s and dementia are on the rise with a new case being reported every 3 seconds annually and the number of people suffering from them is expected to double every 20 years. If global dementia care were a country, then it would be the 18th largest economy in the world.

With Alzheimer’s disease becoming better understood and with its recently suggested new title of “Type 3 Diabetes” the links are becoming even stronger with the already understood effects of breastfeeding upon insulin sensitivity. The more sensitive you are to insulin the better your body can react to spiking blood sugar levels. Becoming insulin tolerant or less sensitive to insulin is an indication of pre-diabetes.

This study that came out in January 2018 looked at the effects of breastfeeding on type 2 diabetes over a 30-year period. A 30-year study is no easily achieved feat!

Many studies before this one have looked at self-reports or family and medical accounts of a woman’s history, much like the one from 2013, but this one is not like the others. This study specifically looked at women of childbearing age and screened them regularly for diabetes before and after their pregnancies. Because of this, they were able to show that the benefits were directly linked to breastfeeding and were not related to other factors such as race, body size, gestational diabetes, lifestyle behaviours and other metabolic risk factors.

The results from this study were significant, they found that women who breastfed for less than 6 months had a 25% reduction in their risk of developing type 2 diabetes, whereas those women that breastfed for 6 months or more across all their births had a whopping 47 % reduction in their chance of developing type 2 diabetes. That’s a halving of their risk!

With advances in our understanding of Alzheimer’s and the fact that it, and dementia, could be one of the biggest epidemics facing us over the next few decades, its new title of “type 3 diabetes” could explain why diabetes research is so important. The links between breastfeeding and improved insulin sensitivity make it clear that breastfeeding can reduce a mother’s likelihood of gaining diabetes and, in addition, it has been shown to significantly lower the chance of her gaining Alzheimer’s in older age.

Breastfeeding is not just a form of sustenance as many are led to believe, it really is a panacea for babies providing a myriad of benefits to babies for the duration of their feeding journey. Many families make the decision to breastfeed because of the health benefits to a growing newborn, but many fail to consider the huge benefits to a mother, both in the short and long-term. For some, these advantages may become obvious during their breastfeeding journey, whilst for others, the benefits may not become pertinent for many decades after their breastfeeding relationships end.