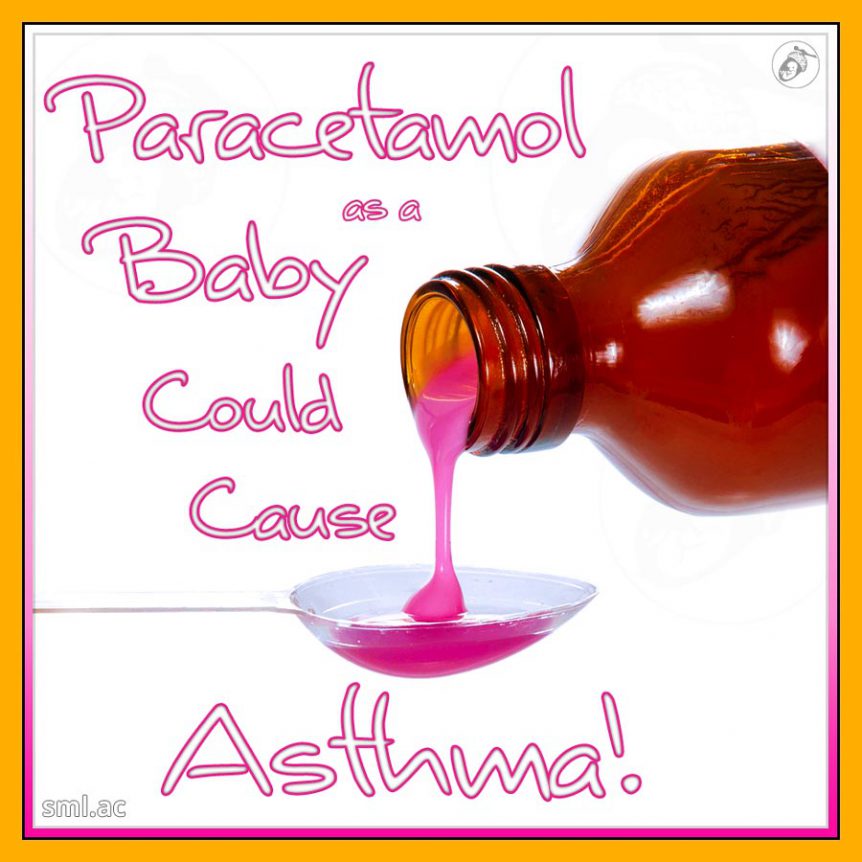 What do you do when your child appears to be in pain or has a fever? You grab the *insert paracetamol suspension of your choice* probably the one beginning with C and ending in lots of E numbers! What many of us are unaware of is that giving paracetamol (or acetaminophen / Tylenol as its sometimes known elsewhere) dramatically increases the chances of your doting child becoming asthmatic!

The term asthma comes from the Greek verb aazein, meaning to exhale with the open mouth or sharp breath. Its first recorded use was around the 8th century BC in the Ilead, an ancient Greek epic poem about the Trojan war and the quarrel between King Agamemnon and the warrior Achilles. However, its first use as a medical term did not happen for another 4 hundred years or so when it appeared in the Corpus Hippocraticum – stemming from the work of the father of medicine, Hippocrates. Within its pages, you’ll find the Hippocratic oath, the basis for professional ethics in modern medicine.

Historically there have been different ways of treating asthma – ancient Greeks were known to treat asthma with owls’ blood in wine, ancient Egyptians were known to heat herbs on bricks and inhale their fumes. In China a few hundred years ago it was common for a person with asthma to be given herbs containing ephedrine, from which they could inhale beta-antagonists. Beta-antagonists are medications that relax muscles of the airways, widening them and result in easier breathing. This is also how modern medicine treats asthma today – using beta-antagonists in blue inhalers!

In the early 1900s, along with killing babies by not touching them (week 109), they decided that asthma was a figment of people’s imagination and one of the holy seven psychosomatic illnesses! A child’s asthmatic wheeze was seen as a suppressed cry for its mother. This crazy circle of events meant that this inflammatory disease became the cue to be ignored, not touched and sent for psychological treatment to unearth your unconscious feelings for your mother! WTF! Fortunately, in the 1960s asthma became recognised as the life-changing, chronic disease it can actually be.

So how is asthma related to paracetamol? The link between paracetamol causing asthma is not a new theory that is yet to be proved – there has been a well-proven and fairly conclusive link between the two for many years. There have been multiple studies, some the biggest of their kind, uncovering this link and others besides.

Two of these studies have had over 100,000 participants. One of them has shown that children given paracetamol before the age of 6 months have a whopping 30% higher chance of being diagnosed with asthma by the age of 3, with a similar result at age 7. Furthermore, the other study showed that children who had been given paracetamol more than once a month over the past year had a three-fold increased risk of asthma compared with those that had not taken the drug in the past 12 months. That is a staggering 300% increased risk.

Another study that looked at over 200,000 children from 31 countries found even more damning figures –

Hold up! Don’t throw away that bottle of pink stuff yet… actually do throw it away – the added ingredients alone are worth avoiding – instead, replace it with a sugar and colour-free paracetamol suspension.

The studies cannot prove conclusively that it is paracetamol which causes asthma, due to the way they have to be conducted. Researchers wouldn’t be able to conduct it under controlled conditions, and even if they could it would be unethical, to say the least. The link between increased use of paracetamol and certain demographics may include other confounding factors cannot be ruled out either, in other words – they can’t rule out that the increased use of paracetamol may be linked to other things, such as lifestyle choices, health, and wellbeing factors that could also cause asthma.

The thing that these studies do prove, is a very strong link and a pretty undeniable correlation between paracetamol use in infancy and asthma in childhood.

There are two points that should be made very clear:

There isn’t really anything else that can be used for pain relief in babies or any other antipyretics (fever-reducing drugs) to reduce their temperature when it gets too high. The NSAID (Non- Steroidal Anti Inflammatory Drug) Ibuprofen, for example, is not suitable for babies under 5KG (11lbs) and comes with its own slurry of implications for long-term health.

A fever is not a bad thing that must be treated in every circumstance. It can actually be a really good sign that your little one’s immune system is working correctly. If some fevers are allowed to run their course, it can sometimes lessen the length and severity of the illness. The American Academy of Pediatrics state “It should be emphasized that fever is not an illness but is, in fact, a physiological mechanism that has beneficial effects in fighting infection.”

It should be noted that there are different acceptable upper limits for temperatures at different ages – the younger the baby, the lower the threshold. NICE (National Institute for Health and Care Excellence) – who currently set the guidance for the NHS – currently states: “Fever in babies under 3 months is rare and can be a sign of serious illness or infection. If your baby is younger than 3 months and has a fever (38°C or above), or is between 3 and 6 months of age with a temperature of 39°C or above, you should seek advice from a healthcare professional.”

So what should you do when your child has a fever?

Firstly, do your own research, we have no medical qualifications and are not medically trained, so don’t just take our word for it. If you are in doubt, seek medical assistance or consult a medical professional. If it helps, this is how we coped – Firstly, we heavily limited the use of paracetamol in the first year and have kept it to a minimum as much as possible. We have let fevers run, we have stifled them too. There were no hard and fast rules. Use your knowledge and understanding of your little one, and your own judgment – different circumstances call for different measures. If we let a fever run, we would consistently monitor their temperature, ensuring it didn’t go above the threshold for their age. In the times we did medicate, for comfort or because we were unable to monitor them sufficiently, we would err towards a half dose first and give more if needed. That way we were able to find the minimal effective dose and only occasionally did we up to full doses.

The practice we chose takes time and patience, something some parents are unwilling or unable to give.

If those parents were aware of the stakes, would they still make the same choices?

Is making your child less irritable worth increasing their chances of asthma?

Is pre-empting their discomfort during pre-immunisation worth gambling with their future health?

Seeing your child ill, is always an unpleasant and heart-wrenching experience. Our instinct as parents is to protect and ease their suffering, but many are aware of the true cost that comes with the near instant relief sought from infant paracetamol. It certainly has its place in our medicine cabinet, but it comes with its compromises. All parenting decisions are some kind of compromise, just ensure you know the stakes that your compromises entail.