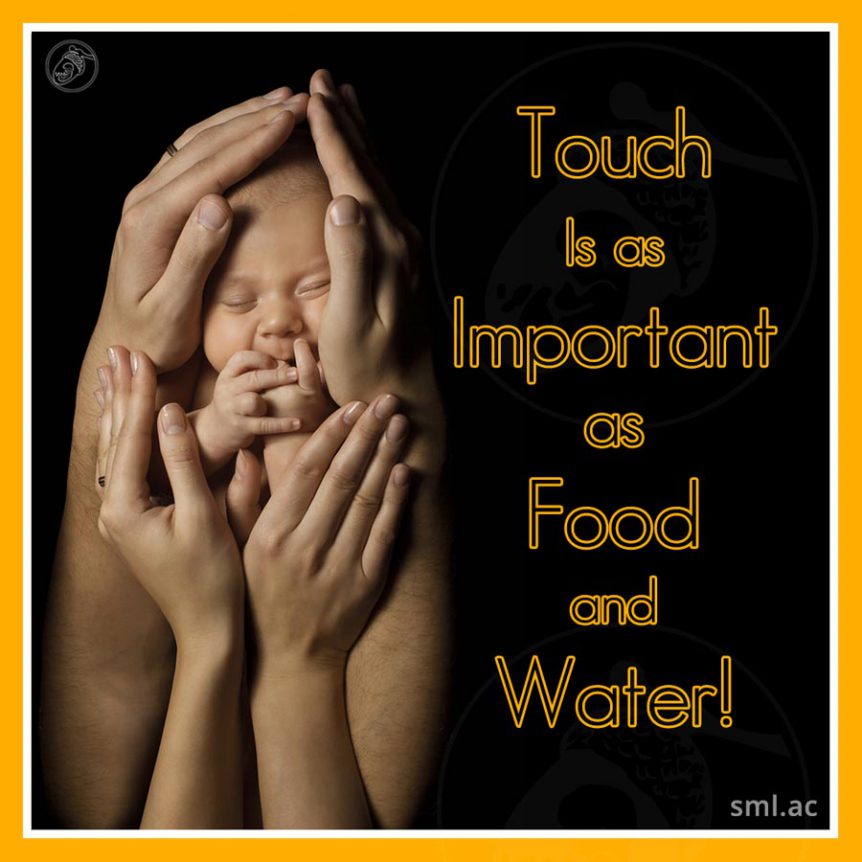 Touch may not be able to provide the physical necessities to a growing child, but without touch, they are unable to thrive!

There have been numerous studies into the importance of physical touch, especially to growing babies and children. Many refer to the multitude of benefits to the brain or mood, the links between touch and the easing of pain, or the lifting of depression and improvement in overall well being, but few make the case for hugging your child more than its relationship to the term “failure to thrive”.

Failure to thrive was first introduced in the early 1900s to describe the poor growth in orphaned children. The term is most commonly attributed to infants that fail to gain weight or grow.

Babies that are are not held, not nuzzled (how can you resist that smell!) and not hugged enough, will – quite literally – stop growing! Feed and water them all you like, but if you don’t cuddle them enough, they will not grow. Taken to the extreme and deprived of touch for long enough, even when given adequate nutrition, babies die.

This was not discovered in some perverse study from the “dark ages”, but from observational studies of children in orphanages in the 1900s. These institutions practised the teachings that stemmed from the work of Dr Luther Emmet Holt – arguably the father of the “hands-off” parenting approach that took hold in the first half of the 20th Century. We encountered Dr Holt when we looked at baby cages – yes there is were such things as baby cages – we looked at them in detail in week 94.

The “hands-off” approach promoted that you can spoil a baby with too much physical touch and soothing, something that is still thrown about by the most ignorant in today’s society – the evidence against this sort of practice is so profound, I find it amazing that these notions still persist, when they have caused such immense damage and cost countless lives.

This was not the case elsewhere, as noted in Ashley Montagu’s book, Touching: the Human Significance of the Skin – In Germany, there was the Children’s Clinic in Dusseldorf where they had very low mortality rates, a Dr Talbot visited “he was shown over the wards by Dr. Arthur Schlossmann, the director. The wards were neat and tidy, but what piqued Dr. Talbot’s curiosity was the sight of a fat old woman who was carrying a very measly baby on her hip. ‘Who’s that?’ inquired Dr. Talbot. ‘Oh, that,’ replied Schlossmann, ‘is Old Anna. When we have done everything we can medically for a baby, and it is still not doing well, we turn it over to Old Anna, and she is always successful“.

The standard policy in the 80s for premature babies was “hands off”. However, a study towards the end of the decade showed that infants who received 15 minutes of massaging every day, gained weight 47% quicker than those that did not. They also showed signs of a more rapidly maturing nervous system. Tiffany Field, a psychologist at the University of Miami Medical School – who did the study – noted that the massaged infants did not eat any more than the others either, ”Their weight gain seems due to the effect of contact on their metabolism.’’ This advantage was still evident 8 months later in follow-up appointments.

The hypothesis for this outcome is that the touch system is part of a primitive survival mechanism found in all mammals. All mammals depend on maternal care for survival in the early days, weeks and months and an extended absence of the mothers touch (eg. more than 45 minutes in rats) triggers the slowing of an infant’s metabolism – thus a lowering of its need for nourishment – and increases its chances of surviving until it regains contact with its mother. Touch was shown to inhibit the production of beta-endorphin, a chemical that can affect the levels of insulin and growth hormones. Prolonged exposure to high levels of beta-endorphins have been shown to stunt growth and the production of this chemical is shown to only decrease with touch.

Other research has suggested that infants who experience more skin-to-skin contact have an advantage in mental development in the first six months of life. It’s the first way all infants learn about their environment and about 80% of a baby’s communication is through their body movement. Babies only resort to crying once their needs are urgent, whilst their movements show more subtle feelings and needs – the easiest way to read a baby’s communication is via skin-to-skin contact.

Research has shown that the more a mother holds her baby, the more aware she is of the baby’s needs and follow-up research showed superior cognitive development for as long as 8 years later! Mothers who have regular skin-to-skin contact with their babies have lower stress levels, report lower levels of depression and seem to be more responsive to their baby’s cues and in turn, the babies are more responsive to their mothers. Fear not, dads – the same holds true for fathers too.

The importance of skin-to-skin after birth cannot be emphasised enough, trawl through google and you’ll be met with many anecdotal stories of skin-to-skin saving babies lives. After birth, a mother’s chest is a degree or two warmer than the rest of her body, creating a natural warming area for the baby. Having baby in this warm zone after birth can facilitate many other important aspects such as the expulsion of the placenta, breastfeeding, bonding, thermoregulation, regulating baby’s breathing, seeding baby’s microbiome, reduction in newborn stress and more.

Studies in adults have also shown numerous positive attributes associated with touch, including its ability to ease pain and reduce depression. Couples that touch more, for instance, have been shown to have greater satisfaction in their relationships and some of the best sports teams have been observed as the touchiest.

In week 39 we learned that touch is the very first sense we develop, as early as 3 weeks post-conception and fully functioning at 8 weeks, when a mere stroke of the cheek elicits protective movements. Not only is touch the first sense we develop, but is also “the first language we learn” and remains “our richest means of emotional expression” throughout life, according to Dacher Keltner, author and professor of psychology at the University of California, Berkeley.

Touch sets off the release of the hormone oxytocin – a powerful and important hormone, especially in labour (we explored it in this post) – that helps to reduce levels of the stress hormone, cortisol and creates a sensation of trust. In the brain, prefrontal areas – which help regulate emotion – can relax, freeing them for another of their primary purposes: problem-solving. In effect, the body interprets a supportive touch as “I’ll share the load.”

Physical contact is the ultimate signal to infants and children that they are safe. There are many ways you can enhance your baby’s world of touch from simple things like skin-to-skin, cuddles and snuggles to baby massage and baby wearing – the more, the better! It aids their development, improves their growth, aids bonding, reduces stress for all parties involved and does many more things besides.

Touch given in abundance will help little ones flourish – so cuddle, snuggle and spoil them with touch – they will thrive!