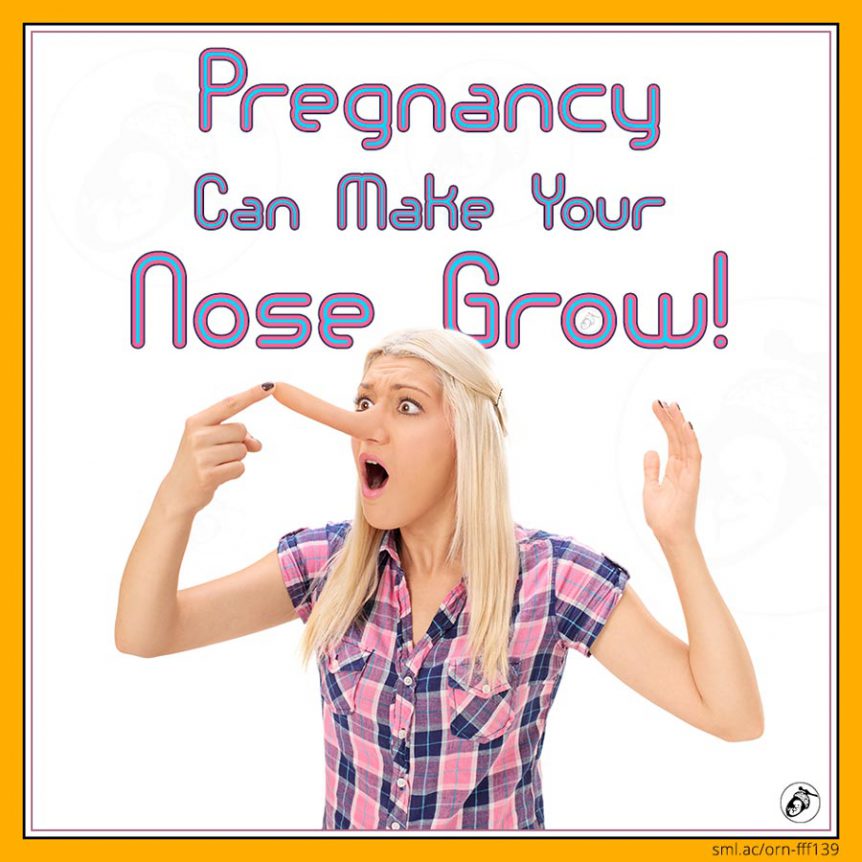 Pregnancy initiates a unique set of physiological changes in a woman’s body – many of them are well known, but there are some changes that many, don’t expect!

Now before we put someone’s nose out we should let you know that this week’s fact will have as many jokes, terms for noses and anything else related that we can shoehorn in – so if you get a whiff of a pun or two, please forgive us. All I can hear are nose from Bev – I say come on, you nose it makes scents!

Your hooter isn’t the only thing that can get bigger whilst you’re pregnant. We’ve already discovered that pregnant women’s feet grow during pregnancy and for some this increase in shoe size becomes permanent.

This happened way back in week 3 when our Fun Fact Fridays were a couple of paragraphs on our blog – often with smelling errors. What were we thinking? Who nose!

Your Mary Rose can suffer the same blow, it too can grow during pregnancy.

BONUS FACT
It was once thought that a swollen nose meant that you were pregnant with a girl – yet other sources said it was an indication of a boy. To date, there has been shown to be no correlation to inflamed conks and the gender of the baby.

Oestrogen stimulates the mucous membranes of the nasal organ by increasing the blood flow to them. Both the membranes within your snout and the muscles below your whiffer expand to accommodate this increased flow. This results in swelling and an apparent increase in the size of your olfactory appendage.

The extra stimulation to the mucous linings of your hairy toes can also lead to an increase in mucus production, making you more likely to get stuffy and bunged up. This makes your honker more likely to become irritated and therefore become swollen and appear bigger.

For some, the hormonal effects of the third trimester may come as a blow and many will think it’s just snot something to look forward to, they may even look down their nose at such a prospect.

Others may think that compared to the swelling encountered in other areas – a puffy proboscis may be the least of your worries and something not to be sniffed at. In the event of choosing where they get swelling, they may even say to themselves – “The nose? Yes! sinus up” or “Bulging Beak, I Pick You”

Whichever camp you sit in, rest assured the effects on your bloated bugle will run out of time and your smeller will return to its original size as your body returns to normal.

“What do you find inside a clean nose?

it roams all over his face.”

“You know what they say about fellas with big snouts…

or was it big handkerchiefs?”

What do you call a nose without a body?

Because then it’d be a foot!

What did one eye say to the other?

Between you and me, something smells!