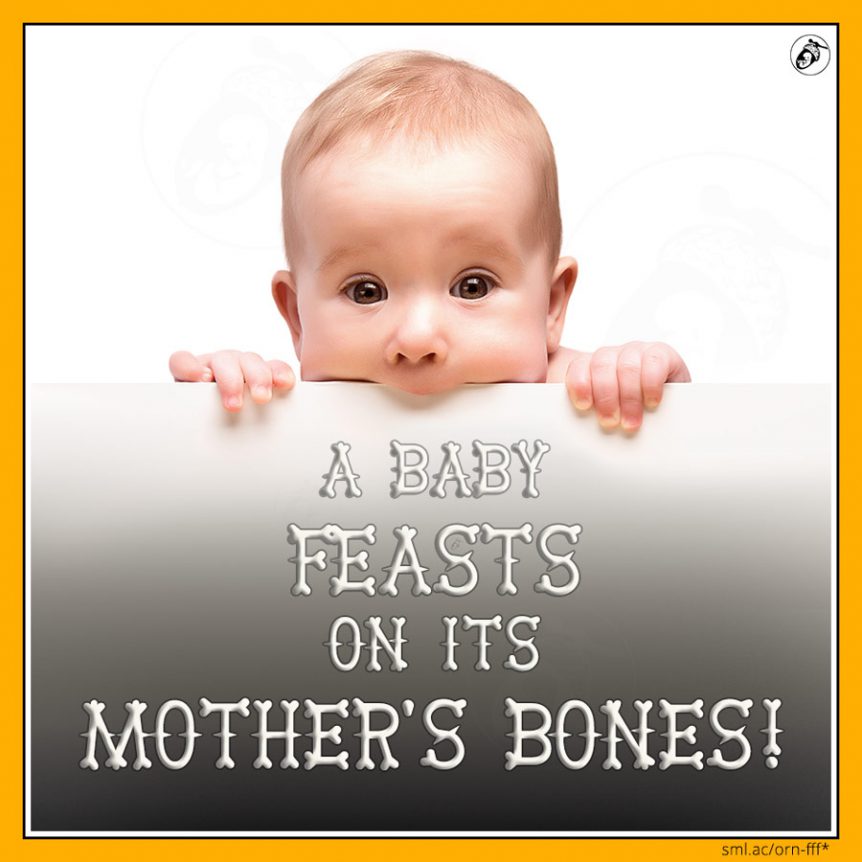 This week we’re delving into a world where your bones are consumed by the baby you carry, why it happens, and what you can do to mitigate their destruction!

What a mother eats during pregnancy is super important, as previous weeks have shown us:

If we go way back to week 15, we found out that babies in utero can taste what the mother is eating and this can influence their taste preferences when they grow up.

Week 116 showed us that we shouldn’t eat for two when we looked at the actual calorie requirements for an expecting mother and the dangers of being overweight during pregnancy.

Week 119 showed us that eating too much chicken in pregnancy could shrink your child’s penis. But don’t be too alarmed, this was an advertising tactic used to attract (if you can call it that) pregnant mothers to a vegan lifestyle. Whilst there is a connection, it’s a tenuous one, to say the least. The culprit behind those claims was a group of chemicals that leach from plastics into the food chain, called phthalates. Phthalates are harmful and can shrink your baby boy’s penis if you’re exposed to large amounts when pregnant. As a consequence of researching for that week, we completely changed much of our own habits around food and plastics.

In week 126 we found out that folic acid could actually cause birth defects if the expectant mother had a mutation to something we called the motherfucker gene because of its acronym, MTHFR. In that week we took a deep dive into the reasons why folate levels are critical during pregnancy, what a neural tube is, what causes defects in neural tubes and why having the motherfucker gene mutation could make folic acid actually cause folate deficiencies, rather than correct them.

Then in week 128, we looked at a food that many of us would love to have a valid excuse to eat – chocolate. Chocolate can contribute to cheerful pregnancies and happier babies. We showed some of the studies that proved this and then looked at some of the ingredients in chocolate that make it beneficial, especially to pregnant mothers and their impending offspring.

That brings us onto the subject of today’s fact – calcium. Calcium makes up approximately 2% of your total bodyweight and has many important functions within your body –

Because about 99% of the of the calcium in the body is used to keep your bones and teeth strong, it may come as no surprise that a growing baby in utero will need a tremendous amount of calcium to grow its body from scratch.

When it comes to growing and providing for babies, a mother’s body will always come in second place. We have evolved to ensure that a growing baby receives all the nutrients that it needs to thrive, even at the expense of the mother’s body. This also happens during breastfeeding and is why mothers that become poorly can still breastfeed, but may take longer to recover.

If adequate amounts of calcium are not present in a mother’s diet when the growing baby needs it, where do you think it gets it from? The mothers greatest source of calcium, her bones!

But don’t freakout yet, pregnancy doesn’t come without some bonus skills to combat this:

There is a hormone that helps protect bones and pregnant women can produce more of it in a day than non-pregnant women do in three years (week 5*)! That hormone is Oestrogen.

Any bone mass lost during pregnancy is typically restored several months after birth or after the mother’s breastfeeding journey ends.

Some studies suggest that pregnancy may even be good for bone health overall, and that the more times a woman goes through pregnancy, the greater her bone density and the lower her risk of fractures.

There is one group, however, where bone loss can cause longer lasting issues. Teenagers that become pregnant are at a far high risk of osteoporosis in later life. Osteoporosis literally means “porous bones”, and occurs when bone loss is serious enough to result in fragile bones and an increased risk of fractures. Teenagers are still building their bone mass and a baby’s need to grow its skeleton is in direct competition with its mothers and, as we mentioned earlier, the baby will always win. This compromises a teenage mother’s ability to achieve optimal bone mass that would help protect her from osteoporosis later in life.

Whilst rare, some women also develop osteoporosis whilst pregnant or breastfeeding, but as with lesser bone loss, it remedies itself within several months of birth or after the end of their breastfeeding journey.

Getting enough calcium should be part of your overall health strategy and for most people, their diet will provide enough calcium.

Foods that rank high in calcium are:

BONUS FACT
Whilst spinach is high in calcium, it is also high in something called oxalate or oxalic acid. This is an organic acid found in many plants. Oxalates inhibit the absorption of calcium and because of this, the actual available amount of calcium in spinach is pretty low and makes spinach a poor choice to support calcium levels

Calcium is great for your bones, but too much of it can cause your kidneys to work harder and can increase the likelihood of kidney stones significantly. Calcium is also a nuisance to other vitamins and minerals.

Calcium can negatively affect how your body absorbs other minerals such as iron, zinc and magnesium. This is because calcium naturally carries a very small electrical charge (which is why it can conduct electricity in your body) and your body can only absorb a limited amount of charged particles at once. When calcium is present it decreases the absorption of the other minerals and is why supplements like iron, zinc and magnesium should not be taken within 2 hours of consuming calcium-rich foods.

Maintaining a balanced diet should provide a pregnant mother with everything she needs. However, there are a few things to be aware of that can make thing easier.

Vitamin D, the sunshine vitamin, is super important because it is intrinsic to the absorption of calcium. Without vitamin D, the body can’t absorb calcium and other minerals. Vitamin D levels in pregnancy can also affect the eventual height of your baby when they reach adulthood (48).

One of the first places that calcium often gets absorbed from is the pelvis. Some women find that low calcium can cause pain in that area. Pain in this area can sometimes get confused with SPD (Symphysis Pubis Dysfunction) that is also known as pelvic girdle pain.

Watch out for caffeine and excess salt as they can decrease absorption of calcium or increase calcium excretion from the body (alcohol can do this too, but considering that there is no safe amount of alcohol during pregnancy, this won’t be an issue for most).

So rest assured, for those of you who have had your bones ravaged, they will recover. They could also be even healthier and possibly even denser than they were before you became pregnant.