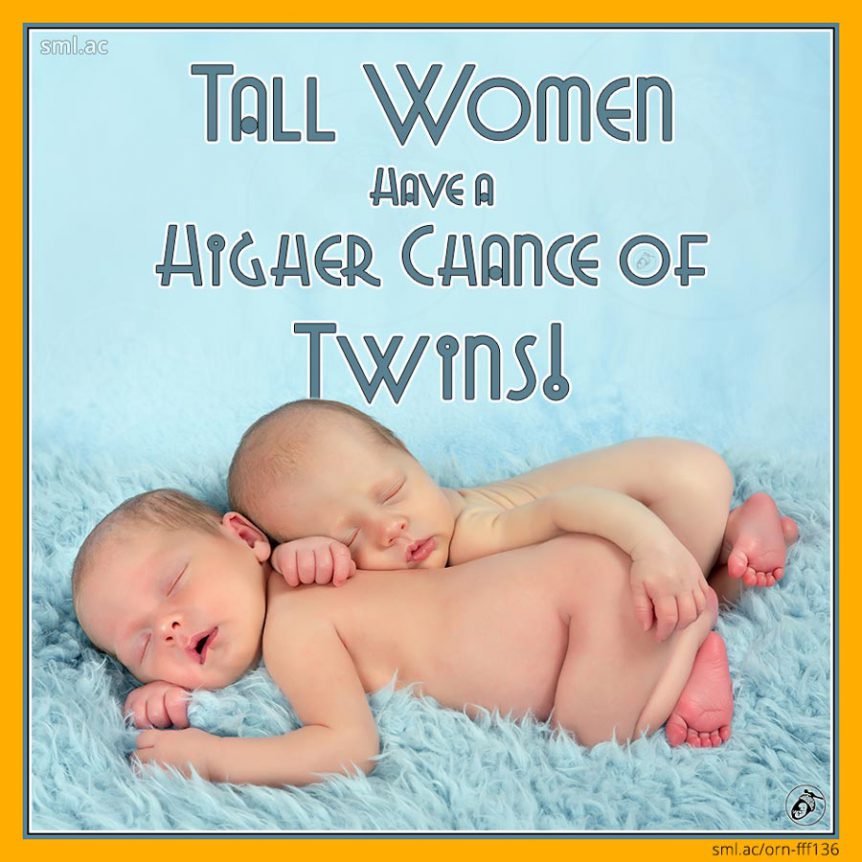 There are many things that contribute to your chances of having twins – from your weight, your genes, your age, whether or not you’re having fertility treatment, whether you’re a parent to twins already or whether your diet is rich in yams or not. Today we’re looking at another factor that increases your chances of having twins – your height. FYI Stick with us until the end for the yam thing.

Until 2011, there was no way to truly show if height had an influence upon your chances of having twins. This is because of all the other factors that can influence the conception of twins. In 2011 the findings of a Dutch study that looked at over 6500 women who had undergone In-Vitro Fertilisation (IVF) and was for the first time able to show a link between the height of the mother and her probability of having a multiple birth.

This study looked at a number of independent variables that may have an impact, including BMI, weight, height, maternal age, number of previous pregnancies, alcohol usage and the number of oocytes retrieved.

An oocyte is simply an immature egg or ovum. An oocyte develops into a mature ovum in the follicle – in a process called oogenesis. Once mature, the egg is then ovulated from the follicle in a process called ovulation. When you hear about egg donation or harvesting, they are most often referring to oocytes. Back in week 123 we discovered that the egg, or should that be oocyte, that you came from wasn’t made by your mother, but by your grandmother when your mother was growing in utero.

In addition to looking at the independent variables, the researchers also excluded as many confounding factors as possible. They excluded any patients that had incomplete files or data, donated eggs, had additional fertility treatment and pregnancies that didn’t reach full term.

The part of the study that we’re interested in is when they specifically looked at the 2300 mothers who had received a double embryo transplant (DET). Of these mothers, 371 had singleton pregnancies and a further 125 had twin pregnancies. This group showed two factors that had an influence on the chance of twin pregnancies. One was related to the number of oocytes retrieved and the other was related to the height of the mother.

BONUS FACT
You can tell identical twins apart by their tummy buttons. A tummy button is a scar and thus, they’re individual and completely unique to each twin.

Those women that had had more than 11 oocytes retrieved for IVF treatment were shown to have a higher chance of having twins. According to Dr Lambers, the person behind the research, this relationship “probably reflects the fact that these women would have had a larger choice of good quality embryos.” This simply means that because of a greater selection of viable oocytes, they were able to cherry pick those oocytes that had a stronger chance of developing into a pregnancy. Because these mothers had also received a double embryo transplant – meaning two fertilised embryos were implanted at the same time – the chance of twins would, therefore, be higher and more easily explained. However, the relationship to height cannot be as easily understood.

When they analysed the group, they found that a maternal height of over 1.74 meters (5’8”) showed a higher chance of having twins. Dr Lambers referenced other studies that may explain these findings – those studies found a relationship between levels of vascular endothelial growth factor-A (VEGF-A) and women prone to having twins and Dr Lambers wonders if there may be a relationship between tall stature and levels of VEGF-A. VEGF stimulates the formation of blood vessels and is strongly related to the formation of the placenta.

There are other studies that also show a correlation between multiple births and levels of Insulin-like Growth factor 1 or IGF-1. IGF-1 plays an important role in childhood growth and continues in adulthood to be related to the building up of tissues (an anabolic effect). IGF is known to increase ovulation by increasing the sensitivity of the ovaries to follicle stimulating hormone and has also been shown in other studies to help embryos survive the early stages of development. Levels of IGF are related to adult height – higher levels are found in taller people and lower levels in shorter people.

As with many things, there are a number of variables that contribute to any outcome, and twins are no different. Whilst studies would suggest your chance of having twins is higher if you are taller than the average, the increase is relatively small. There are many factors that contribute to multiple births, height is just one of them. Eating yams is another:

There is a tribe in Nigeria called the Yoruba who have the highest rate of twins births in the world, they also have a diet rich in cassava, a type of yam. The peel of cassava contains a compound called phytoestrogen that may promote hyperovulation. Hyperovulation is when a woman’s ovaries release more than one egg at a time and as you would expect, hyperovulation increases the chances of twins considerably. Whilst it’s clear that the increased levels of phytoestrogen definitely have an effect on the high rate of twins, scientists also think that the Yoruba tribe’s genetics may also play a role.