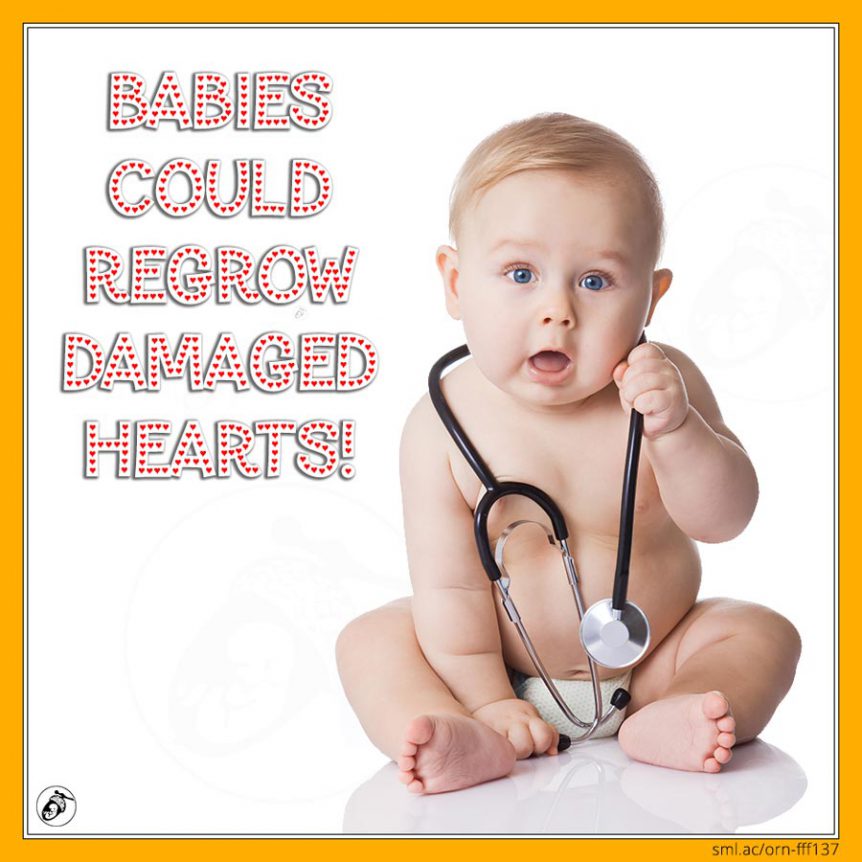 This week fact appears to be more like science fiction than an actual fact. But the study that spurned this weeks fact is anything but science fiction – and it may pave the way to saving many millions, if not billions, of lives!

Cardiovascular disease involves the heart and blood vessels, affecting over 7 million people in the UK. It kills someone in the UK every 3 minutes and accounts for over a quarter of all deaths in the UK. If we were able to cure cardiovascular disease, the potential upsides would be significant and one study may just be shinning a bit of light in this direction.

This week isn’t the first time we’ve looked at the amazing superhuman abilities of little ones to repair themselves, week 107 showed us the amazing ability that children have to regrow amputated fingertips, including nail, flesh and bone! The study we’re looking at today involves a similar healing ability, but this week it’s the ability to heal hearts.

Babies hearts have a tough job to start with – Before they’re born, their dinky little hearts may have beaten over 60 million times already(75). To achieve such a high number of beats before birth, they need to start early and to do this their heart starts beating just 3 weeks after conception (88).

Previous research has shown that fish and amphibians, that can regrow fins and other appendages, can
also regrow portions of their heart after injury. In contrast, adult mammals lack this healing ability. When their hearts suffer damage, such as after a heart attack, the result is a weaker heart that is far more likely to lead to heart failure. The inability of the heart to heal itself is one of the major barriers in cardiovascular medicine.

The study that spurned today’s fact set out to see if this amazing heart healing ability was present in mammals. They found that it is, but it is quickly forgotten. They found that within 3 weeks of removing 15% of a newborn mouse’s heart, the heart was able to completely regrow the lost tissue. It did this so well that it looked and functioned just like a normal heart. It’s thought that the source of the new cells may be the uninjured beating heart cells, called cardiomyocytes. They stop beating just long enough to divide and provide the heart with new cardiomyocytes to repair the lost tissue. It’s thought that newborn humans may also possess such skills but ethical considerations make this hard to establish.

This research demonstrates that the ability our hearts have to repair themselves is something that is not pure science fiction, but merely a forgotten skill. The next step for the researchers is to find out how long this brief window lasts for and understand why, and how, this ability is “turned off’. With this knowledge, work can then be directed towards discovering methods to reawaken the ability for cardiac regeneration in adulthood.

BONUS FACT
Week 89 showed us that there is one other time when a heart could be healed after injury – when you’re pregnant. Studies have shown that if a mother’s heart is damaged during pregnancy the baby can send stem cells to help heal it. The damaged area is actually replaced by the baby’s cells and that repaired area then has the baby’s DNA instead of the mothers – in a process called fetomaternal microchimerism.

Did you know that you can help make your baby’s heart stronger whilst they’re in utero? Well, back in week 106 we discovered just that. Exercise over time generally leads to a slower heart rate and greater heart rate variability – both of these are considered indicative of good heart health. This effect is known as the exercise training response and is considered evidence of a strong and healthy heart.

By exercising in pregnancy, you can pass on these positive effects to your unborn child. They have been shown to gain an exercise training response almost by osmosis – even though they haven’t exercised themselves, their heart receives the benefits. Benefits that have been shown to last for weeks after birth and are thought to last far longer.

With 12 babies a day being diagnosed with a heart defect, these types of study cannot come quick enough. The potential benefits to humanity and society are pretty obvious, but the benefits to things like the UK’s beloved NHS, maybe less so – healthcare costs relating to cardiovascular disease are estimated at £9 Billion per year, with the cost to the UK economy estimated at in excess of £19 Billion.

In the meantime, we should look after our hearts by eating well, drinking plenty of water and getting regular exercise. If you’re pregnant, doing so becomes even more important, remember to exercise for two and not eat for two (116), because you can pass on the benefits to your baby and give them a headstart with a stronger, healthier heart.