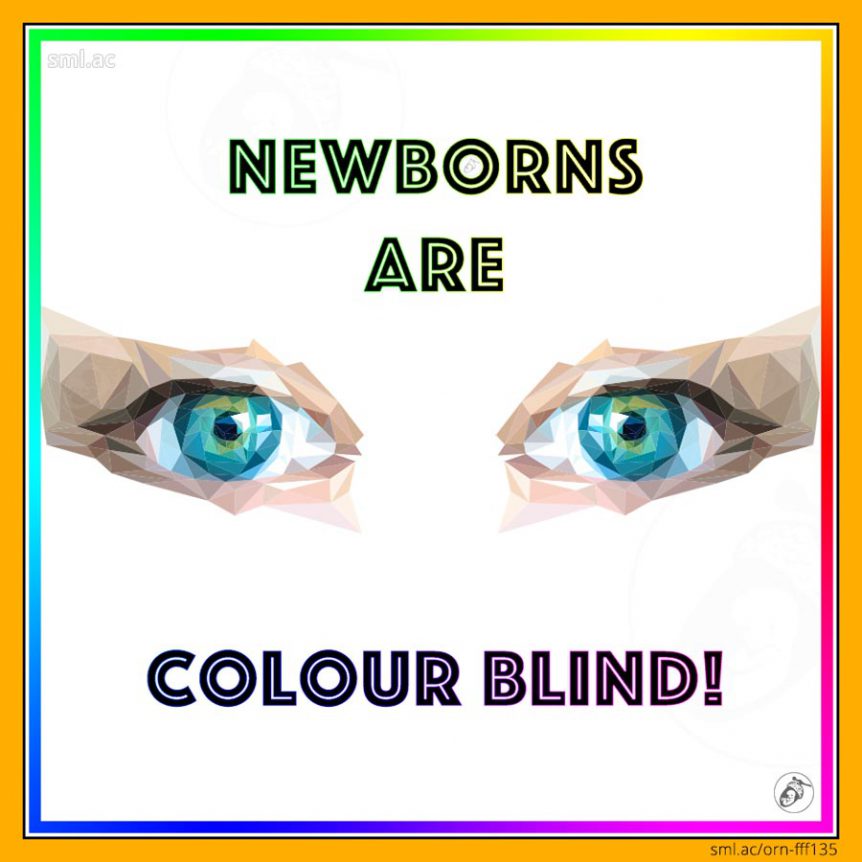 Even in the womb, babies can tell the difference between light and dark. But, at birth, they are several weeks away from seeing their first colour.

The first thing we look for when we meet a new person is eye contact and that is never truer when we meet our newborn for the very first time. Some new parents find it deflating when their newborn doesn’t make proper eye contact, but it’s only because their vision isn’t yet as good as our own and will take many years to reach adult levels.

At birth, a newborn can only see about 20-30cm (8-10”) in front of them and the only colours they see are black, white and grey. During a baby’s time in the womb, they are able to distinguish between light and dark and this practised ability is how they see for the very first time. The lines that are formed when dark meets light create shapes and this is all a baby is first able to see.

During the first weeks and months are when a baby learns how to see or to be more accurate, their brains learn how to see. This is because when a baby is born its eyes have everything needed to see normally, it’s just that their brains don’t know what any of the information coming from the eyes means.

*BONUS FACT*
At birth, each eye has all the physical structure needed to begin to see normally, but in addition to the brain not understanding the information, the eyes have yet to work together in something called binocular vision.
Binocular vision helps with skills such as catching, grasping, depth perception and it allows us to see in 3 dimensions.

Last year an amazing series of images showed us the transition that we expect a newborn to go through as their vision changes – going from the black and whites shapes to seeing proper, full-colour images. To do this, a clinic partnered with a leading eye surgeon from London’s Moorfield Eye Hospital to create a GIF… JIF… GIF…

I think we need to explore this, even though it is wildly off topic.

*TANGENT ALERT*
So how do you pronounce it? I wasn’t too sure, so I dove a little deeper and to say that this is a hotly debated topic would be an understatement.

There are two camps:

Those that use a hard G – as in Graphic, Gift or Gimp.
and
the other camp that uses a soft G – as in Gin, Gym and Gel.

The Webby Awards are known for only allowing five words in any acceptance speech and when the creator of the aforementioned image format, Steve Wilhite, received a lifetime achievement award in 2013 he had five, very damning words for the hard G brigade. After a tribute to Steve that presented many of the memorable GIFs (JIFS) he decided to accept his award and present his five words in the image format he invented, it simply said – It’s pronounced “JIF” NOT “GIF”!

That pretty much set the record straight until… The Chief Editor of the Oxford English Dictionary – John Simpson – chimed in to say that it is acceptable to pronounce it both ways. Even if the developer of the format decided it should have a soft G, the widespread use of the hard G is readily understood and the coiner of the word effectively loses control of it once it is out there.

And this is where those in the hard G camp sit, they suggest it is the most logical way to pronounce it and that it is also the most commonly adopted usage.

It takes time for the brain to make sense of all the signals coming from the eyes because of the immense amount of information that the eyes convey. The numbers vary but it is thought that each eye has over 100 million rods and around 7 million cones, however, some estimates think these numbers are low and together they may exceed 150 million. That’s 300 million receptors – is it any wonder it takes so long for the brain to learn what it all means?

That’s why the visual cortex part of the brain takes up about 30% of the cortex, compared to 8% for touch and 3% for hearing – the development of sight, may in part, account for some of that tremendous growth that a newborn’s brain does in the first year, something that previous weeks have often explored.

Babies’ brains can make over a quarter of million neurons every minute (83) and they are born with over a billion of them (95). To achieve this growth, a baby’s brain will use around 60% of its entire energy (110) and by the time a child is 3 years old, their brain will be over 80% of its adult size (62) and may have over 1 quadrillion connections – If you want to know exactly how many a quadrillion is, check out week 124.

In the first weeks, babies can only distinguish black, white and greys with a 5% difference between them, but within only a month that changes dramatically and increases to 0.5%. From this age on, the ability to see colour will develop as the brain becomes more familiar with the information from the cones within the eye.

Cones can be split into three types – S, M and L. That stands for short, medium and long and refers to the wavelengths of light that the cones respond to and thus, the colour they respond to as well – this is because each colour is just a different wavelength of light. The L cones respond to red and are the most prolific, accounting for as much as 75% of all cones in some people. Next up are the M cones responsible for seeing green – these can account for as much as 45%. The S cones help us see blue light and don’t compete, with their percentage never seeing double digits.

As you may expect, with the red L cones being the most prolific it’s often the colour red that becomes visible first – with greens in a quick second. Yellows come a little later as they rely on more sensitive L and M cones. Unsurprisingly, with the S cones being at the lowest density, blue follows up as the last colour to be distinguished.

Whilst these colours become recognised, babies take some time to gain full-colour saturation. What this means is that for a baby to see the colour it needs to be a strong, intense, bright colour – if you show a baby a washed out red or green they won’t be able to differentiate it, as they have yet to gain the ability to see desaturated or less saturated colours.

With eyesight being one of the most brain-hungry processes to learn, the fact that it takes so long to develop comes with little surprise. Whilst a newborn can’t see colour straight away, they can still see, and that ability quickly develops. But sight isn’t everything, the things that are familiar will be far more important during the transition from womb to world – things like familiar voices, physical touch (109) and the most familiar sound of all – their mother’s heartbeat. So keep them close, so they can feel you, hear your voice and of course, see you – and know that with every day that passes they will see you in better detail and with more colour!