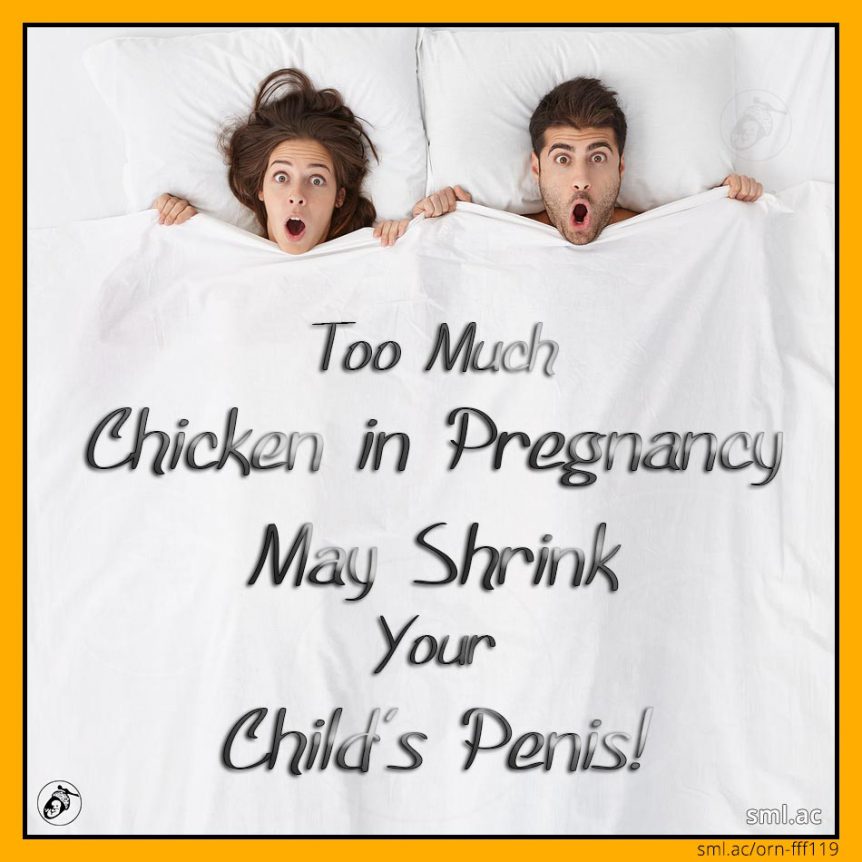 There are chemicals found in food that are known endocrine disruptors, meaning that they disrupt your hormones. Today we’ll take a look at one group of these that make their way into the food chain and can disrupt the growth of your unborn child’s tinky winky!
Sounds crazy, right? We thought so too, so we did a bit of digging…

Today’s Fun Fact is brought to you by the vegan extreme; PETA (People for the Ethical Treatment of Animals). PETA believes that everybody should be vegan and use scaremongering ad campaigns to convert the vulnerable and susceptible to their brand of veganism. The reason we mention them at all is that today’s fact was first brought to light in one of their campaigns that targeted expectant mothers. Whilst the underlying principle behind the fact may be correct, it’s not all it appears once you dig below the surface. You could cause similar issues by lying on your lino floor tiles, licking vinyl records, wrapping all your food in cling film before eating it or, whilst unlikely if you’re pregnant, wearing squeaky PVC outfits.

The principal chemicals behind today’s fact are a group of them known as phthalates that are used to soften and increase the flexibility of plastics and vinyl.

Phthalates show up in every part of a most peoples lives, they can be found in many things such as – cosmetics, personal care products, hair spray, soap, nail polish, moisturisers, many flexible plastics including vinyl toys, shower curtains, wallpaper, blinds, food packaging, wood finishes, detergents, adhesives, plumbing, lubricants, medical tubing and fluid bags (like the ones that collect blood), solvents, insecticides, building materials, lino and other vinyl floorings and to our surprise – clingfilm (a look at the back of our box shows that we’ve been using it wrong and quite likely increasing our own exposure unnecessarily…arghh!).

Most scarily, phthalates were used in children toys for many years. Thankfully, in the EU, it was temporarily banned from children toys in 1999 and that temporary ban became permanent in 2005.

Phthalates are known to have an antiandrogen effect. So what’s an androgen? An androgen is steroid hormone that regulates the maintenance of male characteristics. The most recognisable androgen goes by the name of testosterone. When phthalates block androgens – including testosterone – in developing babies, their effects will mainly have an impact on boys, and more specifically, the development of their boy bits!

The World Health Organisation (WHO) issued a warning in 2012 about these chemicals. In addition to the hormone issues, it stated that children who are exposed to these chemicals whilst in the womb are at an increased risk of “endocrine-related cancers, behavioural and learning problems, including ADHD, infections, asthma, and perhaps obesity and diabetes”.

There have been studies (here and here) that show the links between phthalate exposure whilst in utero and small penises in baby boys. These studies have shown that a boy’s immature reproductive parts are the most vulnerable to the potential effects of phthalates. The effects of exposure to phthalates that a baby receives in utero is also linked to impairment of their reproductive function in adulthood.

The association with phthalates and chicken is a loose one, there are high levels in many foods and some are worse than others. Phthalates enter an animal’s system via their food and water – much in same way as our own – and it is subsequently stored in their fat, that fat is then eaten by us. Because of this, those who have meat and dairy-heavy diets tend to have higher levels of phthalates than those who eat diets rich in plant-based foods. Higher-fat foods are more prone to chemical leeching, thus meaning they are more likely to contain phthalates when they have come into contact with them. Heat makes chemical leaching easier, and thus more likely to occur when plastics are heated, even moderate heat in microwaves and dishwashers can cause plastics degrade and leach more.

But there is one study that shines a little ray of sun on the gloom of phthalate exposure. It showed that 24 hours into fasting, peoples phthalate levels dropped by 5 – 10 times.This makes figuring out where to start and tackling our exposure far easier, as these results would indicate that our highest exposure comes from the food and drinks we consume.

Phthalates are everywhere and completely avoiding them is near impossible. There are no regulations to state whether food has come into contact with them or not. They lurk everywhere, in the plastic tubes that liquids are passed through – such as milk in the dairy industry, to the storage containers and packaging that have housed our food in warehouses or travelled from source to plate, it’s in many things we use on a daily basis from our household chemicals to our personal care products.

Whilst you can’t avoid phthalates completely, you can reduce your frequency of contact by addressing the worst offender – food and drink. Having delved into this world ourselves for this week’s FFF we will have to do some reassessing of our own practices. Over time we will try to switch our food and drink containers to non-plastic, eat more plants, lessen our use of our 2nd favourite food containment device – the humble resealable plastic bag, and of course, stop wrapping our food (especially those high in fat) with our favourite misunderstood and improperly used food covering – clingfilm!