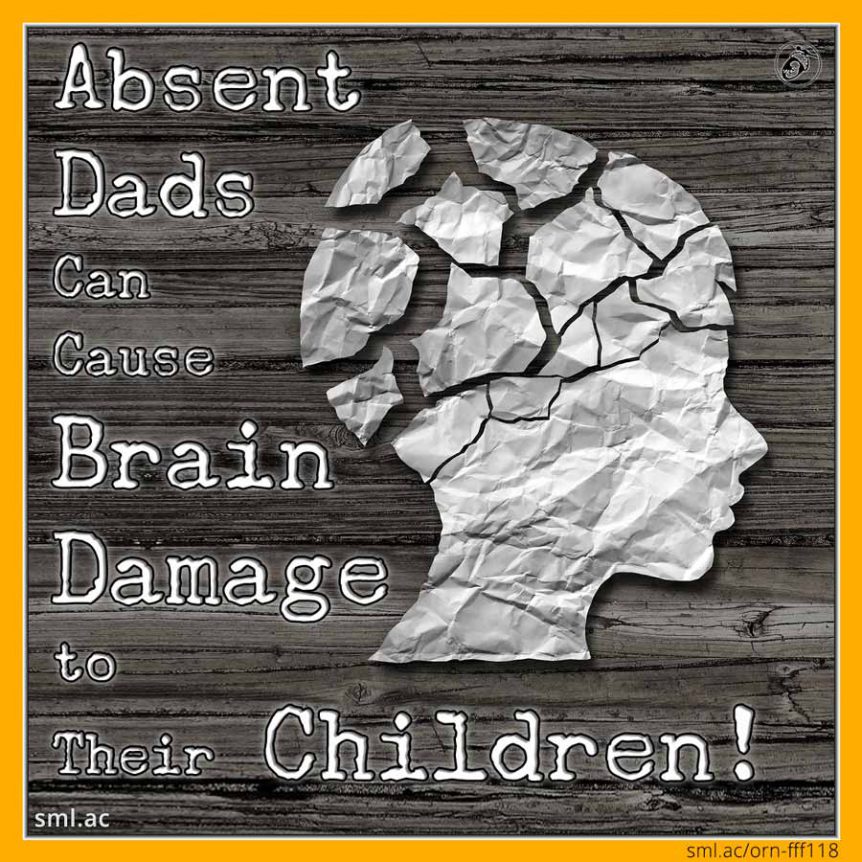 After conception men are not really needed to keep their child alive – they can’t gestate or even lactate! And yet, research has shown that fathers are critical to the future success of their children and if they’re not present when expected, brain damage can occur!

During our birth preparation courses we place a lot of emphasis on a dad’s role during pregnancy, labour and birth and how important they are in the first few months, aka the fourth trimester – dads may even be better than mums at identifying their baby’s cries (Week 102).
In previous weeks we’ve looked at the changes dads undergo – from their hormone changes in pregnancy (69) AND after birth (84) to the way their brains change, actually making new neurons (91).

We, as humans, have the most amazing of brains – they are not static, they constantly rewire to the world we live in, something called neuroplasticity. This ability means that we can always change our brain, the way it functions and in addition to this, it can even grow more neurons in a process called neurogenesis. Whilst we don’t yet fully understand the mechanism of neurogenesis it is strongly correlated to learning new things. We effectively have the ability to change the way our brain works throughout our lives and by learning new things we are effectively growing more neurons!

Many new dads can experience neurogenesis (91) in the first days after their child is born. In addition to that, they also undergo a process that establishes a biochemical bond between them – very similar to that of a mother in pregnancy. That process does not only affect the father, but it also affects the brain of the newborn. Whilst the process of neurogenesis acts to plant extra neurons in a new father’s brain, it appears that a baby is born expecting that bond to be formed in the first place.

In later life, children that were left to be raised solely by their mothers have higher incidences of emotional and psychological issues, they are more likely to be aggressive, have a higher chance of addiction problems and are more likely to get into trouble. But how it affected their brains as a newborn – during one of the most critical, brain forming times of their life – is yet to be fully understood.

One study looking at degu pups set out to understand the changes to a newborn’s brain during this stage. Degus are a type of rodent from Chile and they are biparental animals, which means parenting duties are split between the mother and father – degu fathers behave just like human fathers. They spend the early days of their pups’ lives helping with basic care – such as warming and grooming – and as the pups get older, the degu fathers begin actively playing with their toddler offspring. Because they share much of the same brain structure and connectivity that exists in humans, studies such as these have unearthed much of what we know about the human brain to date.

This study showed that if a father remained in the nest with his pups – their brains developed normally. However, if the father was removed from the nest shortly after the birth of his pups, then the pups brains started to break down at the level of synapses. Synapses are short chemical junctions in the brain that allow brain cells to communicate with each other.

The pups that suffer this synaptic breakdown specifically had fewer synapses in both the somatosensory cortex and the orbitofrontal cortex. This loss can alter the way information is processed and would make these areas of the brain perform abnormally.

No big deal?
Fuck no, potentially a HUGE deal!
Let’s explain by taking a look at the areas of the brain that suffered a loss of synapses.

The somatosensory cortex is an area of the brain that is responsible for sensing touch. Having been in a state of isolation whilst suspended in amniotic fluid, at birth this area is poised for change. However, instead of flourishing in the early days, the absence of a father triggers the breakdown of synapses in this area. These negative effects could lead to developmental problems – such as metabolism issues or irregular hormone production. But more importantly, this means that these newborns may not process touch as well as they should – something that could have serious ramifications. If you saw or read week 109 you’ll understand how important touch is and how devastating the results can be if touch is withheld from babies.

Then we come onto the orbitofrontal cortex. It is among the least-understood parts of the brain but known to be responsible in decision making, rewards, expectations and emotions. It has been associated with OCD, compulsive and repetitive behaviour, and addiction. The orbitofrontal cortex is important in signalling the expected rewards and/or punishments of an action for a given situation. This is a vitally important task as it enables adaptive learning – the ability to weigh up changing situations and behave accordingly.

Dysfunction in the orbitofrontal cortex can also make awkward social situations hard to understand. Those with poor function in this area perform badly in tests originally designed for people on the autistic spectrum to see if they understood social faux pas. The orbitofrontal cortex is also involved in addictive behaviour and addicted individuals have been shown to have deficits in this area. The ramifications of damage to this part of the brain have long and wide-ranging implications for those individuals affected.

If we were to extrapolate from the degu experiments – faulty, damaged or a reduction of synapses in the affected areas could ultimately explain why some children that grow up without a father in their early years, can in later in life wrestle with varying degrees of behavioural and social problems, including addiction.

Absent fathers can quite literally cause brain damage, whilst also stacking the odds against their offspring. They may lessen their children’s ability to adaptively learn, cause them metabolism and hormonal problems and may also make them more likely to suffer from behavioural issues and addiction. Once again it goes to prove just how important fathers are and how critical they are to their children, especially when it comes to the development of their brains.