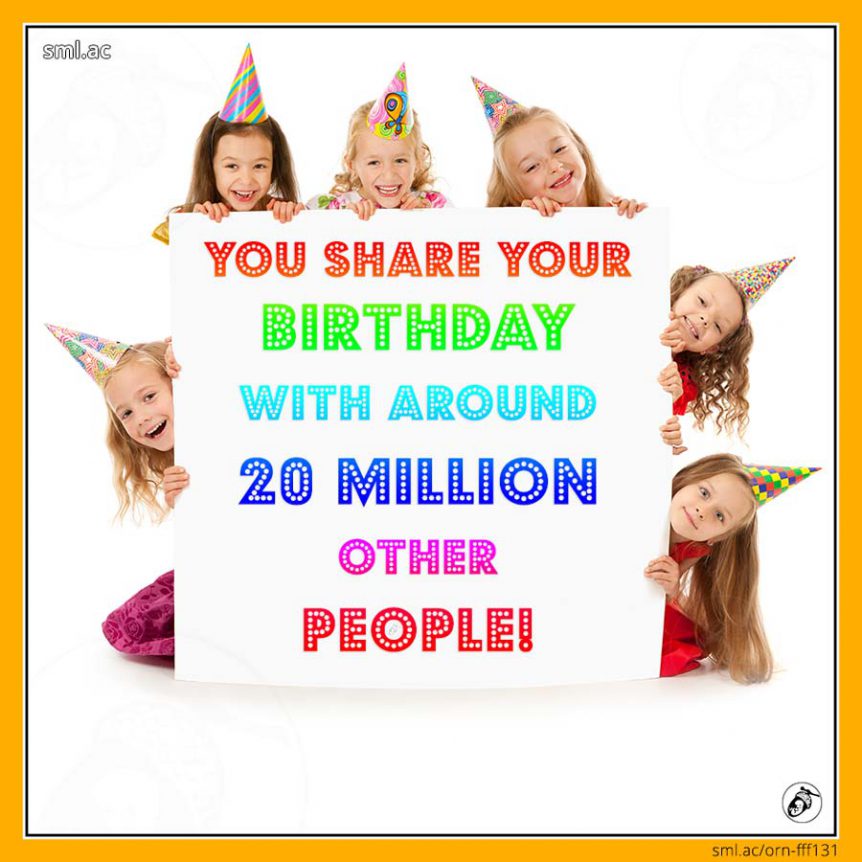 Tomorrow is Small Acorn’s 4th birthday and we thought what better an opportunity than now, to share some facts about birthdays.

We live in a world with an estimated population of over 7.6 billion and there is a huge proportion of them that share the same birthday with you. There are more popular months and less popular days, but just dividing 7.6 billion by 365 – plus the quarter day for a leap year – and you get a number well in excess of 20 million.

August takes the award for being the most popular birthday month accounting for over 9% of all birthdays. This would indicate that December is a particularly frisky month of the year.

The most expensive birthday party was for the Sultan of Brunei, and cost a whopping $27.2 million and included three concerts featuring the king of pop himself, Michael Jackson. Those concerts alone cost more than half of that budget. Given this was in 1996, it would be the equivalent of over $43.5 million today!

The most expensive birthday cake cost $75 million. It was modelled on a fashion catwalk and used 4,000 diamonds that alone cost $45 million. In total it took over 1,100 hours to produce and weighed over 400Kg.

Because birthdays only come once a year, some people try to make them last as long as they possibly can by travelling between time zones. Paul Morgan made an attempt to break the already lofty mark of a 46-hour birthday, by hopping on several planes on the 3rd of February, this year. He came within one minute and five seconds of completely losing his record attempt when he crossed the international date line. However, he did succeed, albeit with the vast majority of his record-breaking birthday in cramped airline seats, celebrating for a whopping 48 hours.

BONUS FACT
Did you know that if you are in a room with 22 other people, that there is a 50-50 chance of two of you sharing a birthday? This is known as the birthday paradox. Now whilst this may seem improbable there are, in fact, 253 possible combinations in a room of 23 people. If there were 40 people the odds rise to 90% and with just 60 people there is more than a 99% chance of two people sharing the same birthday.

Now it’s time for the quick-fire fun fact round –

The happy birthday melody that we all sing at birthdays originally came to be when 2 sisters, Patti and Mildred Hill, composed “Good Morning To All”. They intended to sing it to their pupils every day and composed the song so that it would be easily picked up by the young children in their care. Their melody was combined with the lyrics we know today and was first recorded in print in 1912, yet is thought to have existed far earlier. Whilst many believed it to be a public domain song – without any form of copyright – a well-known company held copyright claim on the song, making many millions from its royalties. However, the song “Happy Birthday to You” lost its copyrighted status in January 2017 in Europe, thrusting it into the public domain.

So, for the 20 million other people that will share their birthday with Small Acorn, here’s to you.