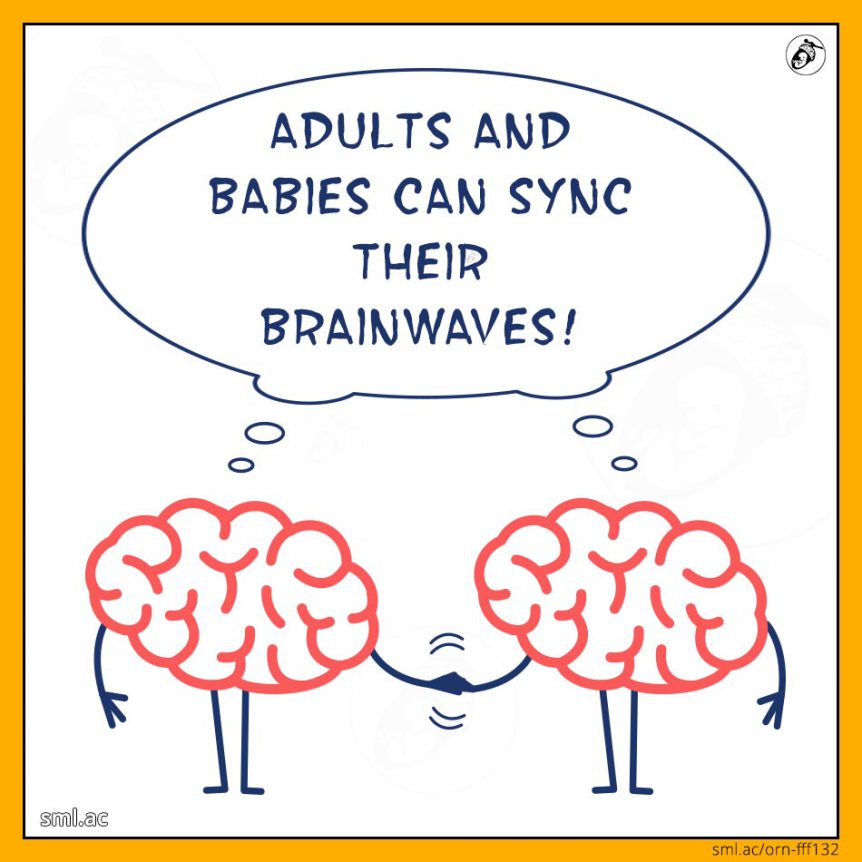 We already know that mothers and their babies share a special connection, week 120 showed how they can sync their heartbeats, just by looking at each other. This week we’re taking look at how their brainwaves can sync too.

So, what is a brainwave? Nope, it’s not what a cartoon brain does to say hello!

Neurons are at the very root of all our thoughts, emotions and behaviours and when they communicate, they fire electrical pulses. When this happens en masse, they produce brain waves that can be picked up by sensors placed on the scalp. This is how the very first brainwaves were first recorded by Hans Berger in 1924. Brainwaves reflect the activity of millions of neurons passing information between different parts of the brain and our brainwaves change depending on what we are doing and how we feeling. They are measured in hertz (cycles per second) and vary from below 0.5hz all the way up to over 100hz.

Studies in the past have shown us that when two adults’ brainwaves are in synchrony during a conversation, it makes their communication far more successful. However, until 2017, we had no idea if the same could be said for infant-adult communication and what impact eye contact would have upon the results.

Researchers at Cambridge University set out to explore this over two sets of experiments using electroencephalography or EEG. An EEG measures the electrical activity of the brainwaves via electrodes that are worn in a skull cap by the participants.

In the first experiment (17 infants), they monitored the brainwave patterns of the infants whilst they watched a video of an adult (whose brainwave patterns had already been recorded) singing nursery rhymes. They sung with three different degrees of eye contact – the first was head on looking at the infant, the second was with the head turned and no eye contact and the third was with the head turned, with eye contact.

As expected, they found a greater synchronisation when the adults gaze met the infants, but surprisingly they found that the greatest synchronisation happened when the adults head was turned away but kept eye contact. The researchers suggest that this may be because the gaze appears to be highly deliberate and so, provides a clear signal that the adult wants to communicate with them.

The second study (19 infants) was performed in the same way, however, this time the adult wasn’t shown on a video, but was live and in person. This time the adult sang the nursery rhymes whilst looking directly at the infant or looking away and the researchers were also able to see if the adult’s brainwaves were being influenced by the infant.

This study found that both the infants’ and the adults’ brainwaves became more synchronised with the others when mutual eye contact was established. The researchers also found that even when the adult averted their gaze, the infant still showed equal interest. They explained that this showed brainwave synchronisation isn’t just due to seeing a face or finding something interesting but is about an intention to communicate.

They also found that the more an infant made an effort to communicate, using vocalisations, the greater their synchrony with the adult when eye contact was made.

The lead author, Victoria Leong, said “When the adult and infant are looking at each other, they are signalling their availability and intention to communicate with each other. We found that both adult and infant brains respond to a gaze signal by becoming more in sync with their partner. This mechanism could prepare parents and babies to communicate, by synchronising when to speak and when to listen, which would also make learning more effective”

Once again the importance of eye contact with our little ones is shown to be of critical importance to their growth and development. It is hard-wired into us a species, to find faces, to make eye contact, to socialise – one of the very things that enabled us to differentiate ourselves from the rest of the animal kingdom. It’s no fluke that our little ones spend so much time perfectly placed to see our faces – think about the way we feed them, the way we carry and hold them and one of the reasons babywearing is so beneficial.

This study has shown us is that baby babbles should not be dismissed and that they may be figuring out the mechanisms of conversation and preparing their foundations for good communication – a skill that is a fundamental necessity when it comes to a child’s ability to learn.