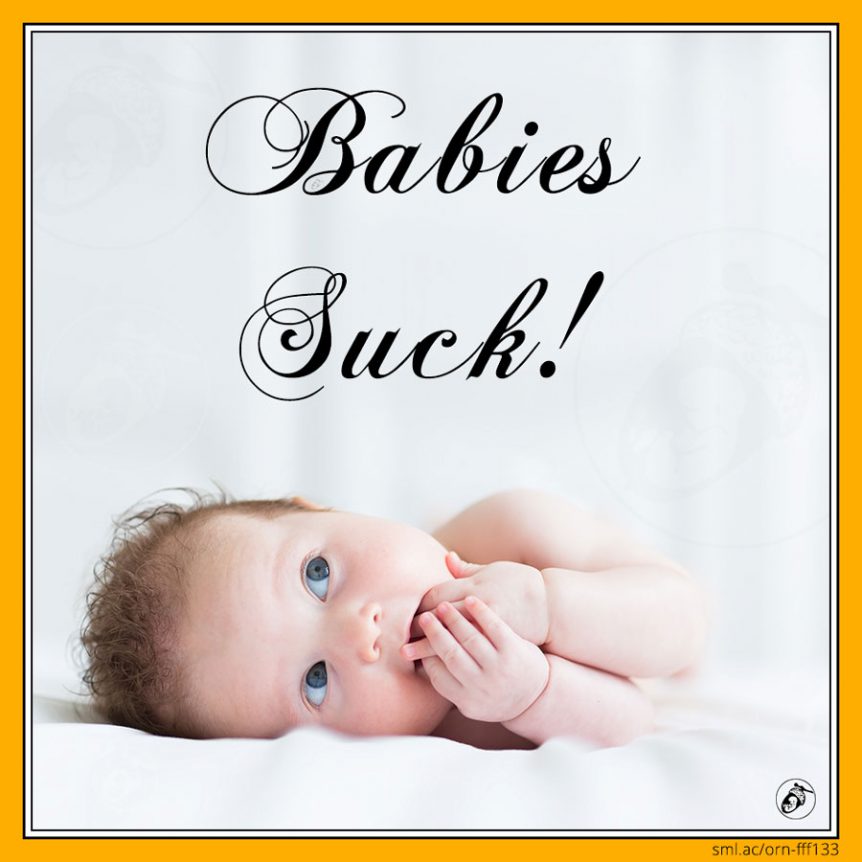 Babies suck, every mother can attest to this and they don’t just do it for the reason you’re thinking…

Babies are born with a tonne of reflexes. Some of them stay with us for life, like the diving reflex (week 80) that enables our body to manage and tolerate lower levels of oxygen when we’re underwater – and some of them, known as primitive reflexes, disappear as we grow.

This week we’re taking a dive into another primitive reflex – probably the most important of them all – the sucking reflex. But before we do that let’s take a look at the primitive reflexes that we’ve covered over the weeks so far…

The Palmar Grasp Reflex (24).
This happens when an object is placed into baby’s hand and its palm is stroked – its fingers will close and they will grasp the object with a ferocious grip, known as the Palmar Grasp. To fully understand this process some “scientists” in the late 1800s, of dubious ethical nature, set out to perform the “hanging babies from a stick” experiments that showed the ferocity of the Palmar Grasp.

~ BONUS FACT ~
Have you ever been stuck in the crazy strong grip of a restful baby? There’s no need to get flustered – just stroke the back of the hand and it will have the reverse effect and open up their hand.

The Parachute Reflex (37)
This happens when a baby thinks it may be falling. It puts it’s arm and legs in a skydiving pose to protect itself from potential damage, especially its head. This is an essential reflex whilst learning to walk and can be activated in any direction of fall. This reflex never fully disappears because it’s a kind of fail-safe, security mechanism for our own protection. When was the last time you face planted the floor?

The Babkin Reflex (46)
This reflex happens when you press both palms of a baby. The response to this stimulus is that the baby will open their mouth. I’ve always thought this turns them into a kind of human Pez dispenser!

The Swimming Reflex (64)
This happens when a baby is placed face down into water, a which point they begin to paddle, kick and attempt to swim. This primitive reflex can be witnessed at mere days after birth and we know that because… once again, there were some dodgy “scientists” experimenting with babies in the past, here’s a video from 1932 showing Johnny at 11 days old.

The Asymmetrical Tonic Neck Reflex or ATNR (72)
This reflex is initiated by turning a baby’s head to one side, whilst the baby is lying on its back. When the head is turned to the right, the right arm and right leg straighten whilst the left arm and leg bend. The opposite is true for the left side. It is the precursor to the hand-eye coordination needed to reach for objects. This has also been known as the fencing reflex because of the position they adopt. En Garde!

The Galant Reflex (93)
This reflex is elicited when you stroke the side of a baby’s spine whilst they are suspended face down. The baby’s trunk will curve inwards to the side of the stroking. Its purpose is to develop range of motion for crawling and walking and is also thought to play a role in the birth process – helping a baby work its way down the birth canal. The most interesting thing about this reflex happens when you stimulate both sides of the spine at the same time – it can cause a baby to wee. Aha… the fingers of power! That would be pissy power!

The sucking reflex becomes fully developed by around 36 weeks into gestation and it’s probably one of, if not the most important reflexes a child has, as it is needed to feed. But when it comes to feeding, by itself, the sucking reflex would be useless – it would need its side-kick, the rooting reflex, to first find the food and get it to where the sucking reflex can take over.

The sucking reflex occurs when the roof of a baby’s mouth, towards the back, is stimulated. This reflex causes a baby to suck anything that touches the roof of their mouth. This reflex disappears at around 4-months-old, by which time it is a learnt behaviour and sucking then becomes the result of conscious effort.

There are two stages to the sucking reflex – Stage one is when they squeeze the nipple between their tongue and soft palette, this stage is also known as the expression stage. Stage two is the forward-backwards movement that the tongue does to suck and create the suction needed. This stage is also known as the milking stage because it is this stage when the milk is coaxed from the breast.

~ BONUS FACT ~
This reflex is what causes the NEH sound in a baby’s pre-cry. Don’t know what a pre-cry is? Take a look at week 121 when we discovered that babies have different cries and you can learn to tell the difference.

Whilst sucking may, at first glance, appear to be all about sustenance – as with most things that evolution has shaped, it serves far more than just a single purpose.

Sucking is related to mouth and jaw movement and can help prepare a baby for making sounds and speaking. There are strong links between feeding skills (ie. sucking) and development of speech sounds. For instance, fricative sounds – SH, TH and F – need the cheeks to be tightened and pulled inward. Plosive sounds – Ps, Bs and Ts – need a build-up of pressure that is dependant on good lip seal. Then there’s the Ls and the Rs, that require lifting of the tongue, that requires good tongue strength. All of these are improved with sucking.

Sucking has a myriad of calming and comforting effects too, something that week 114 unearthed when we looked into the world of thumb-sucking. We discovered that premature babies that sucked their thumbs left hospital far sooner than their non-sucking counterparts. It also showed that sucking has physiologically calming effects too, including slowing heart and breathing rates, and sucking also helps regulate stomach muscle movements that can aid digestion.

Then there’s one of the more crucial benefits of sucking, the mechanical movement it provides to a growing and changing skull. The birth process puts a baby’s skull through some serious stress and then it has to accommodate a rapidly-growing brain after every growth spurt. That’s why their skull doesn’t fully start to fuse until around the age of 2 (60) and instead consists of 6 separate bones – the occipital bone, two parietal bones, two temporal bones and the frontal bone – that are connected by stretchy sutures and together they allow for all this movement.

The problem is these bones don’t always just pop back to where they should be, where they are comfortable, and all by themselves in a painless way – and that’s where sucking can help. Sucking can assist in their realignment and give mechanical relief – think about how you swallow or yawn to relieve pressure in your ears or when you suck on boiled sweets on an aeroplane to equalise to the changing pressure of the cabin.

This type of pressure and skull movement is at its most prominent in the weeks after birth. It is also more likely in the weeks following growth spurts. This is a time when sucking will give the most relief, and for those babies that have experienced instrumental deliveries, unusually long or incredibly quick births or are fractious after big growth spurts, cranial osteopathy can be helpful.

Remember that a sucking baby doesn’t always equal a hungry baby, it could be for comfort, for stress relief, for bonding, for exercise and practice, or it could just be to help relieve the pressure from a growing and realigning skull. If however, you sense they have a greater need to suck than most, then there’s a chance that they’re in discomfort and a trip to see a cranial osteopath may be in order.

Whether you think your baby sucks too much or too little, for comfort or for relief, remember that you’ll never truly know whose baby sucks the most!