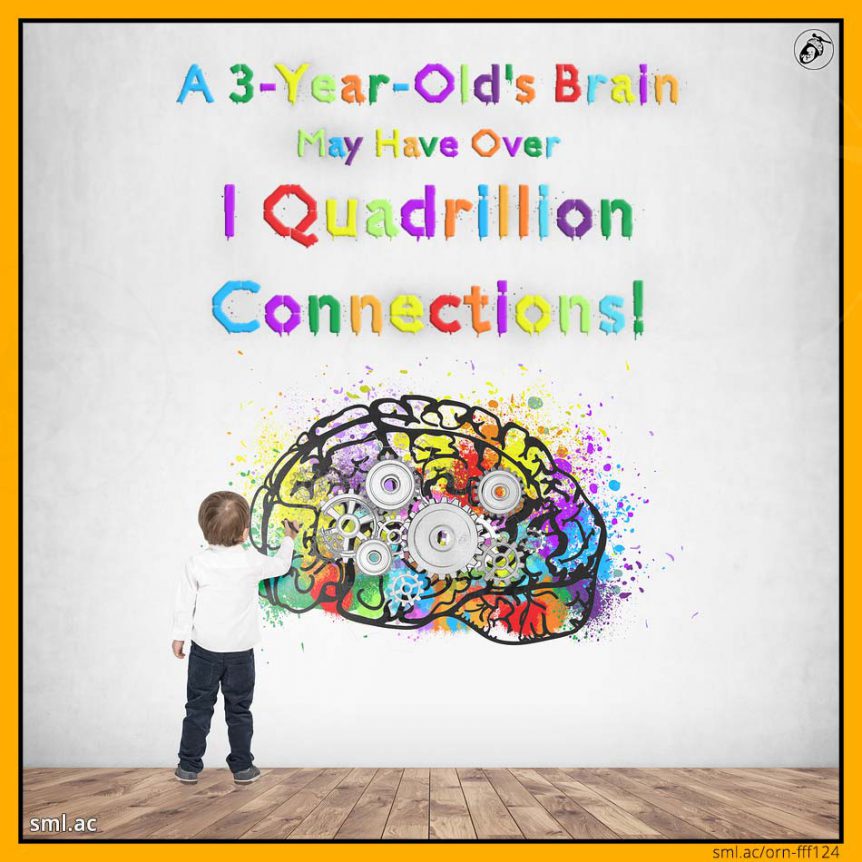 Here at Small Acorn it never ceases to amaze us how fucking brilliant brains are. Mums’ brains, dads’ brains and baby brains – we’ve covered them all – today we’re poking around in the world of baby brains once again

Previous weeks have shown us that mums really can suffer from “mumnesia” and may actually lose some grey matter from the memory centre of their brains (week 97) and dads can make actually make new neurones (91).

Babies’ brains are by far the most amazing of them all – they can make over a quarter of a million neurons every minute (83) and are born with over 1 billion of them (95). In adults, our brain only accounts for 2% of our entire weight, in babies it’s over 10% (56) and these brains are super consumers of energy using around 60% of a baby’s entire available energy(110).

Whilst these fascinatingly complex, yet tiny, baby brains grow at an amazing rate and consume vast amounts of energy to do it, they are delicate and susceptible to their surroundings – they can be affected by hot showers whilst in utero (112), brain damage can occur if their fathers aren’t present (118) and they can be reshaped by the stresses its mother experiences during pregnancy (122).

By the time a child reaches its third birthday, its brain will have reached 80% of its adult size (62) and each and every one of the billion neurones will have made many, many thousands of synaptic connections. If we were to tally up each one of these synapses we would get to the crazy big number of 1 QUADRILLION!!

One quadrillion is number that’s hard to get your teeth into – in old British it would have been a thousand billion (but that’s an old British billion that’s now known as a trillion), it was also known as a billiard, it’s 10¹⁵, a million billion or quite simply – 1 followed by 15 zeros.

We could also look at it in seconds – a million seconds is 12 days, a billion is 30 years, whereas a quadrillion seconds would be 3 million decades.

At the age of three is when our brains are at their highest synaptic density, the time when we have the very most neuronal connections… Ever! From that point onward we will be subjected to synaptic pruning, a process that eliminates weak interconnections in the brain and allows our brains to become more efficient.

We will have weak and strong synapses at many points in our lives and, especially before we turn 30, the weaker ones will be pruned. To strengthen synapses, repetition is critical and is the reason why children feel the need to do the same thing over and over and over – they are actively strengthening those associated synapses, if they didn’t these areas would be pruned. Strong synapses allow better learning within a particular area, while weaker synapses make future learning more difficult.

All these crazy numbers just illustrate one thing, a child’s brain is fucking amazing and that they are probably far more capable than many of us realise. The first three years is when much of a child’s brain taking shape with limitless potential. It is during this period that we lay the basis of who they later become and is why we’re so often heard spouting how critically important these years are.

Whilst many of us don’t have an autobiographical memory before the age of three, we do have a memory of it – for it became the very foundations of everything that we became.