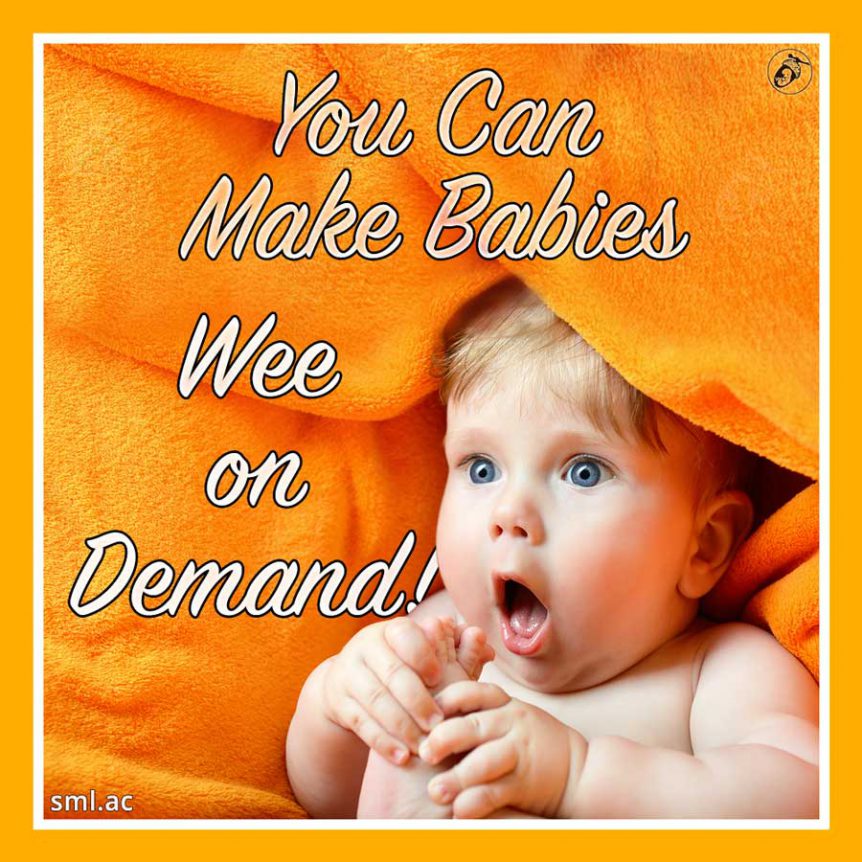 This week we’re looking at a primitive reflex, a primitive reflex is a reflex that originates in the central nervous system and is lost as we grow. They are exhibited in normal babies and are apparent when stimulated in particular ways. We’ve covered many primitive reflexes and some other reflexes in previous weeks –

Palmar grasp reflex in week 24 – here we looked at the “hanging Babies from a stick” experiments!

Parachute reflex in week 37 – when we found out why babies exhibit a skydiving-like posture in certain circumstances.

Babkin Reflex in week 46 – here we uncovered how to turn your child into a human Pez dispenser!

Swimming reflex in week 64 – we discovered that babies will “swim” from birth!

Asymmetrical tonic neck reflex in week 72 – we got wind of your baby’s ninja skills!

Diving reflex in week 80 – when we unearthed that we’re all born with an inner dolphin!

This week is focussed on a reflex called the Galant reflex or Spinal Galant reflex, named after the Russian neurologist, Johann Susman Galant, who first observed this reflex. This reflex is also known as the truncal incurvation reflex, which quite literally means the trunk of the body curving inwards reflex!

So how do we elicit this reflex? By stroking alongside one side of the baby’s spine whilst holding him suspended and face down (medically known as ventral suspension). When you stroke the left side, the baby’s “trunk” will “curve inwards” towards the left and vice versa! If I haven’t painted that picture very well for you, then take a look at the video below to see it in action.

The purpose of this reflex is to encourage movement and develop a range of motion in the hip in preparation for crawling and walking. It is also thought to play a role in the birthing process, with movements of the hip helping a baby work its way down the birth canal. This reflex is often lost by the age of 9 months old.

The most notable element of this reflex is that if you stimulate the Galant reflex on both sides of the spine, it can cause a baby to urinate. That’s right – you quite literally have the power at your fingertips to make your baby wee! However, I don’t suggest you try this yourself, let alone make a habit of it!

There is a disputed area – Retained Reflex Syndrome. In essence, there is a lot of anecdotal evidence, but few studies in this area (that I could easily find) proving it as sound science. The logic seems completely plausible (not that that means much), and with that in mind here’s a brief overview –

Sometimes children don’t lose their primitive reflexes, it is known as retained reflex syndrome and can cause some profound difficulties for children who suffer with it. There are many things thought to contribute to retained reflexes, including instrumental birth (forceps, ventouse, caesarean), dramatic birth (long, short), early or late birth, ear infections and other illnesses as a baby, lack of tummy time and the list goes on…

The same website also shows how to test your child if you think they have a retained Galant reflex and also shows a table showing the overlap with ADHD. For a full list of the symptoms for each type of retained reflex, you can also check out this page.

It appears the treatment for retained reflexes is often to stimulate those areas involved and help promote a transition from primitive reflexes to developed reflexes. The thought appears to be that development was either inhibited by illness, trauma or lack of sufficient stimulation.

The most notable cause of retained reflexes, for me, was lack of “tummy time”. Tummy time is incredibly important for a myriad of other developmental leaps and can be achieved in more ways than just putting a baby on its tummy.

The easiest way to accrue tummy time, and something we promote, is by babywearing. Babywearing is when you literally wear your baby, in a sling, wrap or carrier designed for that purpose. By babywearing, you are exercising the same muscles as tummy time would and you gain a host of other benefits to boot. So wear your babies, keep them close and try not to use your newly found fingertips of power!