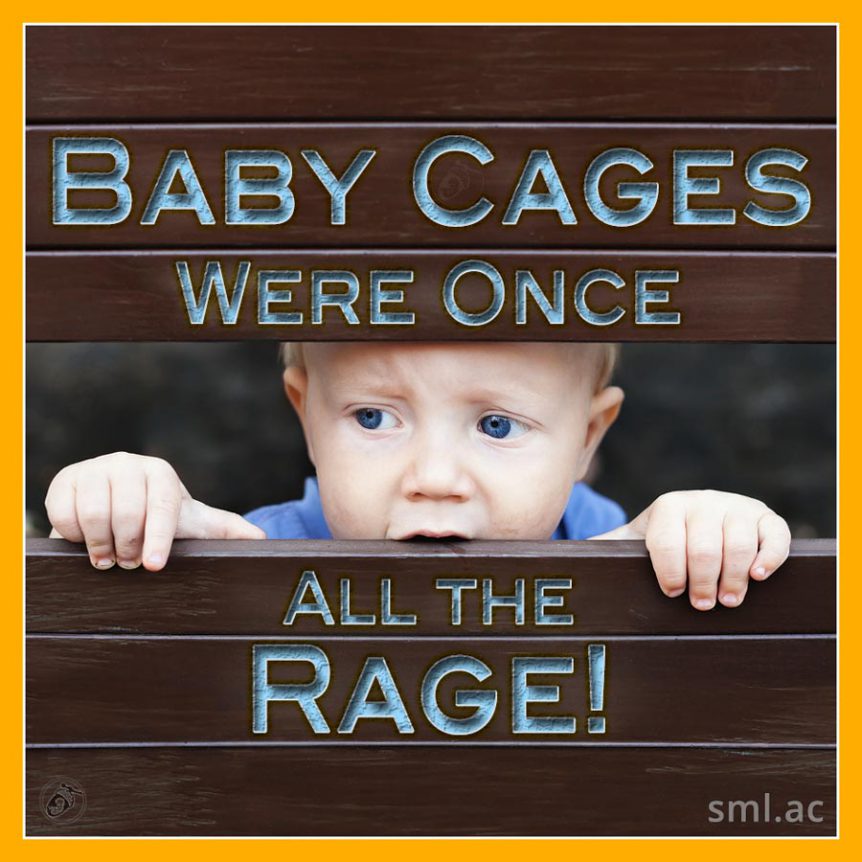 There have been lots of questionable parenting practices over the years. We’ve even covered some of the more questionable experiments, such as the 11-day-old exhibiting the swimming reflex from week 64 and the “hanging babies from a stick” experiments from week 44.

So what the hell is a baby cage? It’s a cage you hang out of a window, then place your doting child into so they can get some fresh air, in every season!

Here are some photos of baby cages in action –

So, not only were these parents caging their children, but also hanging them outside their windows, sometimes many floors up, even in the dead of winter?

Still don’t believe it? Then check out this advert for a baby cage from the 1930’s

As crazy at it seems now, those parents that chose to partake in “baby caging” were doing so at the behest of Dr. Luther Emmet Holt. Dr Holt was the author of the leading child-rearing book of its day The Care and Feeding of Children – first published in the 1890s. To say that this book contains much of the bad advice and unfounded science that plagues some of today’s bookshelves would be doing it a disservice. Whilst it is full of a lot of tripe and prescriptive advice, it is also a book of its time, that was based on the knowledge available. We now live in an age where our understanding of the human anatomy, brain development and a host of other factors has improved a hundred-fold. Our understanding of what children need for them flourish has greatly improved, and science has been able to back-up these findings. Yet, many of the modern offerings found on our bookshelves still offer very similar, outdated, opinionated and unfounded advice – that inhibits the growth of a child. For a list of the authors to avoid and a list of amazing books that every parent should read, have a look here.

The baby cages were not a random insane construct of their time, but a response to the best advice of the day – cold air and sleeping outside, make strong healthy children. The book contained much on the benefits of airing rooms, fresh air and children being outdoors. Exposing children to cold this early on would be poorly advised now, for instance – the improved appetite and better digestion cited as being positive traits, merely indicate the increased calorific burden that was placed upon the child trying to keep itself warm.

It’s worth noting that science is now showing the positive effects of cold therapy, albeit on adults! If you’re interested in the benefits of cold (and hot) therapy on the human body and the slew of reported and studied benefits, you can start your jump down into the rabbit hole by checking out the video below from the amazing biological scientist, Rhonda Patrick, where she touches upon the hormone prolactin, a hormone we covered in weeks 23, 69 & 84.