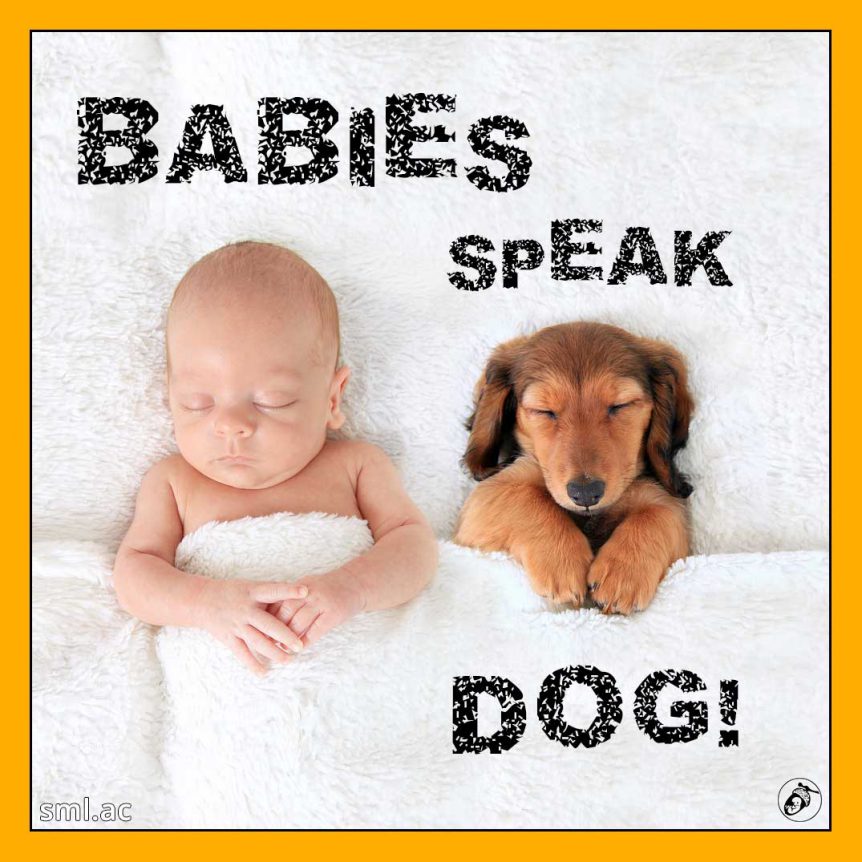 Despite little or no previous experience with dogs – babies were able to understand the meaning behind different dogs’ barks!

A study from the Brigham Young University in Utah, USA, that took place in 2009, looked at 128 infants ranging from 6 months old to 2 years-old. The babies were first shown two images of the same dog showing two different emotions – in one the dog was in an aggressive posture with a threatening facial expression, whilst the other photo showed it with a welcoming, friendly stance. The researchers then played two sound clips, in a random order, of an aggressive and a friendly dog bark.

They found that most babies were able to tell the difference. When a friendly bark was played they looked at its corresponding photo and likewise when the bark was aggressive.

Upon hearing a bark, 6-month-olds would spend most of their time staring at the correct photo, whereas babies older than 6-months-old would merely glance at the correct one – the lead researched is noted as saying “The older kids would glance at it and then kind of look away as if to say, ‘Oh yeah, I get it, it goes with that face. The task is ridiculous. I’m going to move on and look somewhere else around the room.’”

It’s worth noting that whilst the babies in this study were able to tell the difference between the two barks, they appeared to find the whole process enjoyable and some were said to giggle their way through the experiment, regardless of the bark they heard or image they looked at. This revealed, that whilst they can tell the difference between the two dog emotions, there was no apparent understanding of how to react to each one.

This study suggests that we all have the ability when we’re young to “speak dog”, however as with many things in the brain that don’t get used, they get pruned! Neural pruning is something we covered back in weeks 83 and 95.

As we grow – we specialise, and in most cases, understanding human faces and emotions becomes a far more valuable trait, although it subsequently lessens the ability to understand dogs. Unless this trait was being used, there is a high chance it would be pruned along with a potential myriad of other amazing abilities that we all once possessed!