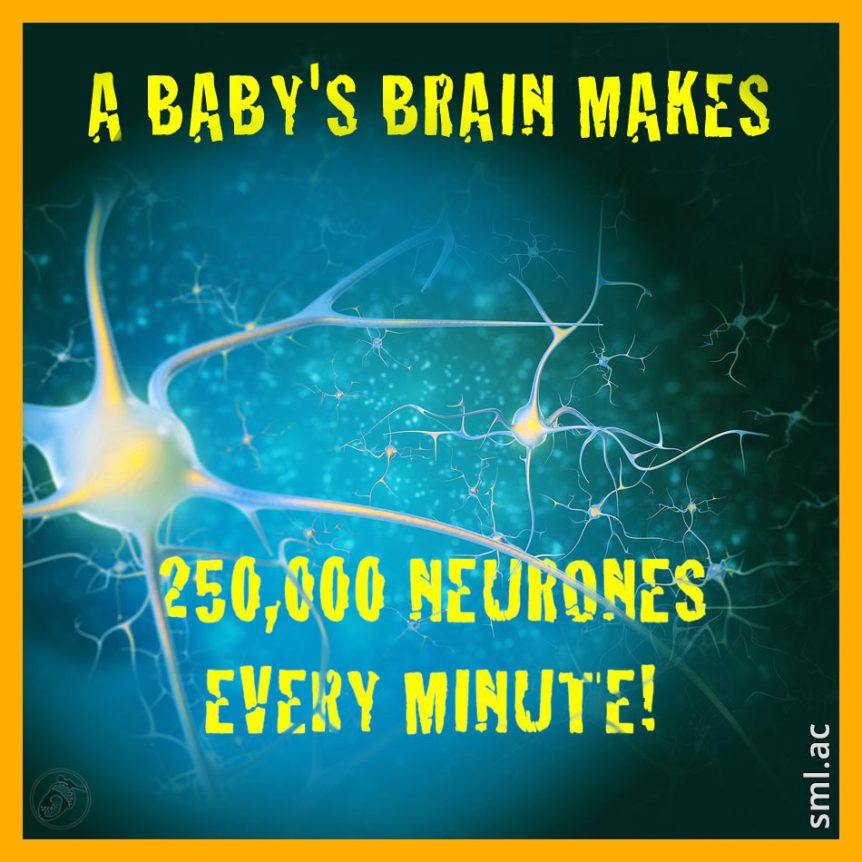 Babies’ brains are phenomenal constructs of nature. We’ve looked at the amazing things that they’re capable of in previous weeks – in week 56 we found out that a newborn’s brain accounts for over 10% of its entire weight, whilst in adults it’s only 2%. Then in week week 67 we discovered that a baby’s brain grows by 1% each day from birth, while in week 60 we shed some light on how the skull accommodates that growth. Finally, in week week 73 we found out that in 90 days a baby’s brain jumps from 33% the size of an adults brain to 55%, that’s 64% overall growth in just 90 days!

This amazing velocity of growth begins well before birth – before many are even aware that they are pregnant. When babies are the size of a poppy seed at around 4 weeks into pregnancy, they may already be adding more than 250,000 neurones every minute.

That’s a staggering 15 million per hour!

This incredible pace of growth is necessary to achieve the end goal – 100 trillion or more interconnections (synapses)!

The brain, at around 15 – 20 weeks after conception, vastly increases the amount of cells in the cerebral cortex – the part of the brain that makes us who we are and enables us to think, perceive and understand. We touched upon this in week 61*.

By the time a baby has reached the 7th month of pregnancy, it will have started to emit brain waves that can be detected from the outside, through a mother’s abdomen.

Babies will keep adding neurones, albeit at a lesser rate, until about 18 months old. They will not make any more from that point on, as the forming of the distinct regions in the brain is more or less complete. The process of synaptic pruning, a process that eliminates weak interconnections in the brain, will continue for many, many years.

Synaptic pruning is a process of great importance, shaping the brain and helping it to specialise for its environment. As research has improved, our understanding of this process has changed – we used to think that all neural pruning ended shortly after birth, then we thought that it ended just before adolescence. Yet, as recently as 2011, we discovered that there is still synaptic pruning occurring well into our 20s.

The period of pruning is associated with a heightened ability to learn. As our understanding of this fascinating subject improves, so does our understanding of what the brain can achieve – moulding itself, the way we perceive only a child’s brain can, well into our late 20’s. Who’s to say as we discover more, we won’t unearth that neural pruning only stops once we stop learning!

It just goes to show, it’s never too late to learn more, understand new concepts and shape our brains into something greater!