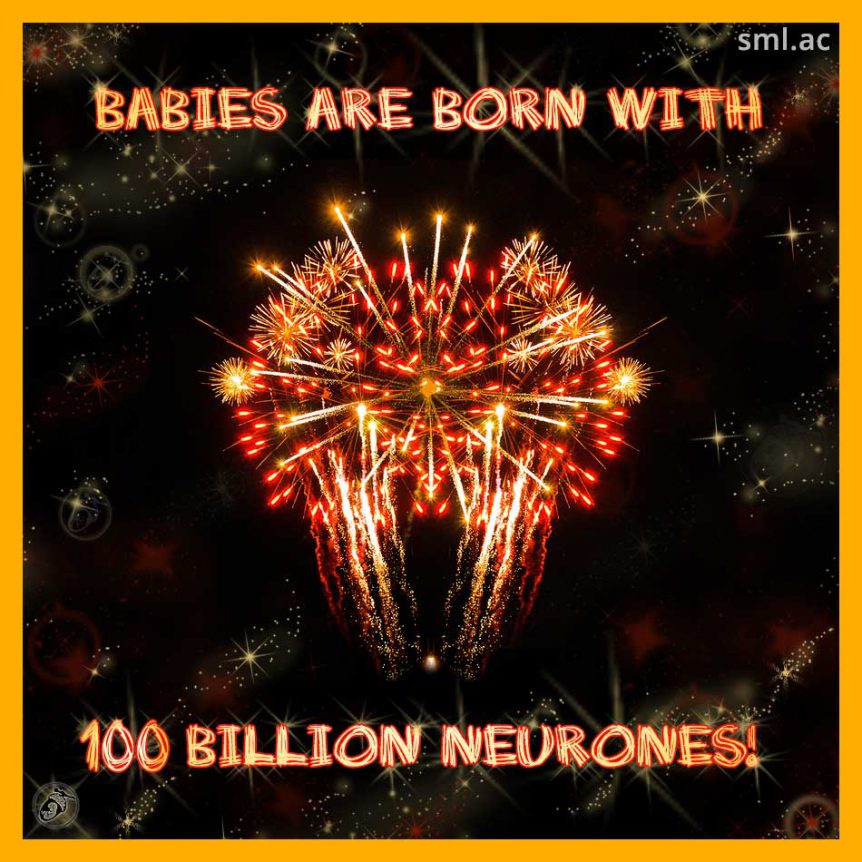 Here at Small Acorn, we love “Baby Brains”, from forgetful mums to the contents of newborns heads!

The former is more than likely caused by the hormone shifts experienced during pregnancy and after birth, some suggest there is no such thing as “baby brain” (AKA pregnancy brain or mumnesia), whilst others claim it’s to enable a new mum’s brain to focus on the needs of her newborn.

The latter, baby brains, is the subject of today’s Fun Fact! We have peered into the brains of babies in previous weeks – Such as in week 83 when we discovered that whilst in utero, a baby’s brain makes up to 250,000 neurones a minute! Then in week 56 we unearthed that a newborn’s brain accounts for over 10% of its entire weight, whilst in adults, it’s only 2%!

The humongous number of neurones is essential for the first year of a baby’s life, in this period a baby has an incredible amount of learning to do. This was illustrated in previous weeks – In week 73 when we found out that a baby’s brain grows, in just 90 days, to half the size of an adults! Whilst week 67 bought with it the discovery that a baby’s brain grows by 1% each day from birth!

A neurone is simply, a brain cell. After birth comparatively few brain cells are made, instead of creating new neurones, these neurons form networks of connections called synapses. These networks are the things that enable us to learn and are formed (or not) through a process of strengthening or pruning.

To strengthen synapses, repetition is key. When a baby is re-exposed to different activities, experiences or likewise, the synapses associated with those activities are strengthened. Repetition is critical to optimal brain development because it strengthens synaptic connections.

The opposite of strengthening is pruning, something we looked at in week 83 when we found out that pruning continues into adulthood and does not stop shortly after birth, as was once thought. Pruning happens when babies are not exposed to repeated activities, the synapses associated with them are weakened and may even be eliminated or pruned.

The strength of synapses is important because they contribute to the efficiency and connectivity within the brain. Theses networks support memory, learning, speech, recognition and many other cognitive abilities. Strong synapses allow better learning toward a particular area, while weaker synapses make future learning more difficult.

The time when these changes happen, to the greatest degree, are in the first 3 years. It’s the time many think a child doesn’t remember, and from an autobiographical memory standpoint, that is true, for most.

However, what most fail to recognise is that we DO have a memory of our first three years because that time is the very building block of our brains. Those years create the shape and form of our brain, they produce the way the synapses have wired together and the networks they’ve formed. All of this happens in our first few years and is why they are so critically important to the fundamental development of every one of us, whether we remember them or not!