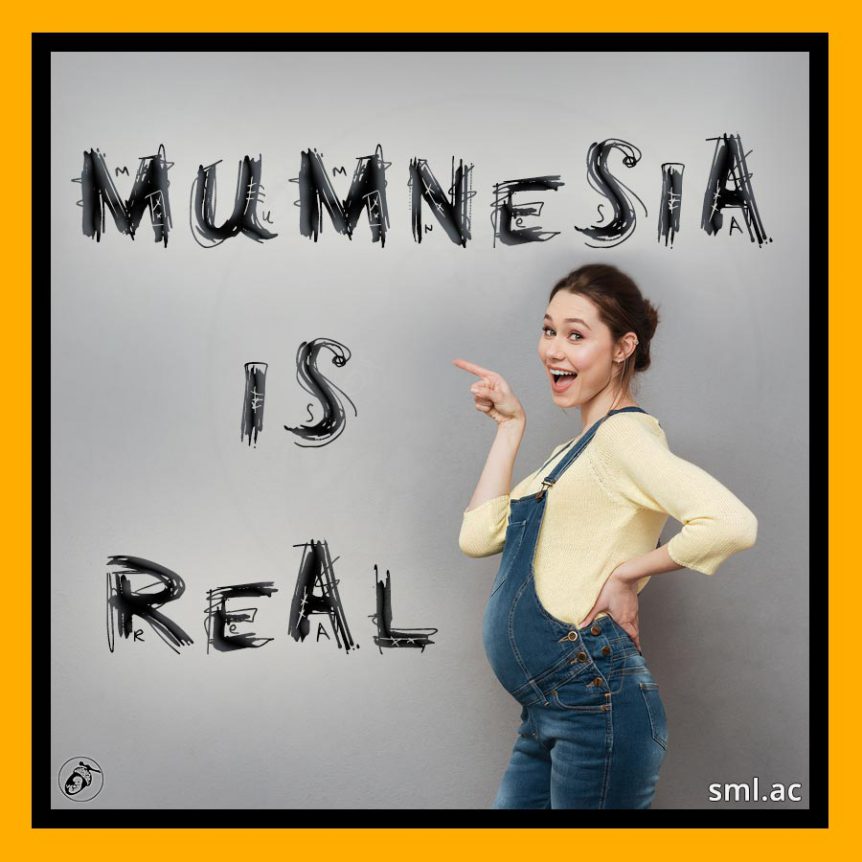 Mumnesia (you may have clocked this word a couple of weeks ago in week 95)… you may know it by its more familiar terms – baby brain, pregnancy brain or baby/pregnancy brain-fog.

The term “mumnesia” is referencing the changes that happen to a woman’s brain during pregnancy and into early parenthood. Many women report forgetfulness, increased sensitivity and becoming less able to focus on logical tasks.

A 2008 study from the University of Sunderland, here in the UK, showed little difference between pregnant and non-pregnant women across 15 sensitive tests of memory and attention. They also conducted two driving simulator tasks and again, found no difference.

A 2010 Australian study set out to test the memory of 1200 women before, during and after pregnancy and again, it showed little difference, indicating no evidence of memory loss.

The researchers behind the UK study were not saying that differences are never found but that “the differences are not consistent with the degree of self-reported deterioration that pregnant women perceive.” It was also mentioned that the deficits that are found “are always mild” and may not necessarily be the pregnancy causing them and that “other major life events” could cause similar effects.

What does this mean for mumnesia?

Do mothers’ brains change or, as we discovered back in week 91, are brain changes reserved solely for new Dads?

Yes, they do, but not for the reasons you may suspect!

This study proves it does exist

A more recent study from 2016 and the first of its kind, has shown that not only does a mother’s brain change significantly, but that change can last for years.

The study revealed that the architecture of a woman’s brain changes remarkably during her first pregnancy, in ways that last for at least 2 years. Most notably was the reduction in the grey matter involved with processing and responding to social signals.

Using MRI (Magnetic Resonance Imaging) scanning they examined the brains of 25 women who had never given birth. They conducted scans before they became pregnant and again a few weeks to a few months after they gave birth. There were also control groups.

The findings showed “highly consistent grey matter volume losses” in the brains of the mothers. The losses were mainly from areas that involved in social tasks such as reading other people’s intentions or actions. Another area that suffered reduced volume was the hippocampus, the memory centre of the brain – an area we’ve encountered in weeks 67, 86 and 91.

One of the more pertinent results from this study was that they could predict the level of attachment (based on a standardised test) a mother would have with her child by the changes in grey matter volume during pregnancy. The scans can predict attachment… WTF!

Two years after the original scans, those that had not become pregnant again returned for more MRI scans. The results from those scans showed that all of the grey matter loss had remained, except for one area – the hippocampus!

This study’s final amazing point came about because the changes that a woman’s brain goes through are so consistent, that a computer algorithm could predict with 100% accuracy whether a woman had been pregnant, just from her MRI!

Anecdotal evidence of forgetful pregnant women is abundant, but the areas affected are often not related to caring for our offspring. Why? Maybe it’s because nature is telling us to focus on the things that are most important?