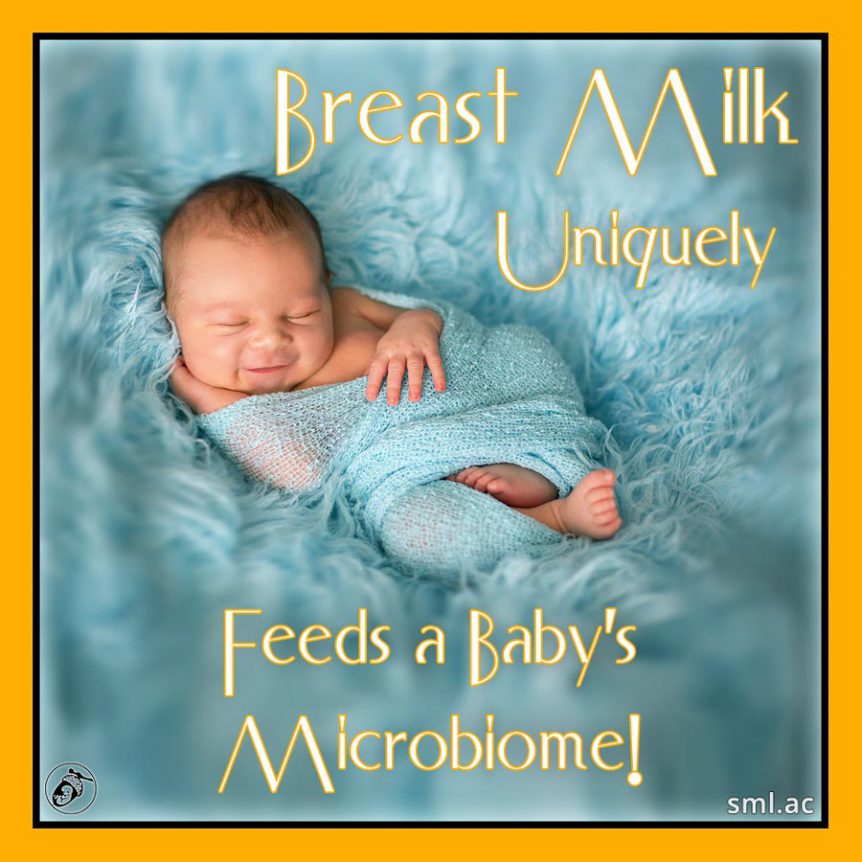 We’re only just starting to understand the human microbiome – the community of flora and fauna that colonises our guts. The discoveries we have made would suggest that dysbiosis (an imbalance) in the gut could be the cause of everything from asthma and allergies to depression and autoimmune conditions. In recent years, there has been a growing weight of research in this field and many of the findings are pointing to this being one of the most critical parts of human health. Breast milk has an ever increasing list of components (and we’ll be looking at over 200 of them this week) that help feed a baby’s microbiome.

For those of you new to Fun Fact Friday, breast milk; the panacea for babies, makes a regular appearance in our weekly dives into everything bump, birth, baby and beyond. We have looked at it in many previous weeks:

Week 57 – we looked at tryptophan and how it helps to regulate mood.

Week 63 – when we found out about the enzyme lysozyme and how it protects babies from diarrhoea-causing diseases, especially E.coli and salmonella.

Week 68 – we discovered that breast milk contains taurine, famous for being in Red Bull and other energy drinks

Week 74 – we found out breast milk, much like the Shreddies adverts of the 90’s, can “keep hunger locked up ’til lunch”, thanks to the satiety hormone, leptin.

Week 86 – we covered the breastmilk component, choline and its essential relationship with memory and motor control.

The components we’re looking at today are known as human milk oligosaccharides, or HMOs. An oligosaccharide is a complex sugar that can be found in all mammalian milk, but for some reason, human milk churns out an exceptional variety – so far, scientists have identified over two hundred HMOs. They are so plentiful in human milk that they are only topped as the most plentiful components by lactose and fats!

It’s not clear why human milk has such high levels of HMOs – it’s got 5 times more than cows milk and several hundred times the quantity. Even chimp milk is impoverished by comparison.

Upon discovering this, scientists were at first baffled, as HMOs are indigestible by babies. You’d have thought something so prolific was going to be a rich source of energy for a growing baby, but that wasn’t the case. So why would a mother expend so much energy making HMOs?

HMOs pass through the stomach and small intestine unharmed, landing in the centre of our immune system, home to the human microbiome – the large intestine! HMOs are not food for the baby, they are food for the baby’s microbes!

In the 1990’s, scientist new there were over 100 HMOs in milk, yet they knew very little about them and what species of bacteria they fed. Fast forward to 2006, after a much work from a diverse team and lots of befuddlement, they found out that HMOs are not an all-purpose food for gut microbiota, but that they selectively nourish one subspecies, Bifidobacterium long infantis (B. infantis). As long as you provide B. infantis with HMOs it will outcompete any other gut bacterium. No other bacteria can thrive on HMO, including common mainstays associated with probiotic yogurts and drinks. when it comes to HMOs as food, some gut bacteria choose the bits they like and discard the rest, some grow very weakly, whilst others don’t grow at all. Unsurprisingly, when it comes to the guts of breastfed infants, B. infantis is the dominant microbe.

As B. infantis digests HMOs, it releases short-chain fatty acids that feed an infants gut cells. For us, this was one of the most insightful outcomes of the research for this week’s Fun Fact Friday – that direct contact with B. infantis encourages adhesive proteins to fill the gaps between gut cells. For those that were with us back in Week 45 when we found out “Babies Have “Open” Guts… And Sometimes They’re Virgin” you may remember that babies are born with immature or open guts. Open guts allow microbes into the bloodstream along with other inflammatory molecules and a baby’s gut does not start to close and become mature until around 6 months old.

BONUS FACT – 90% of serotonin, the neurotransmitter responsible for maintaining mood balance (a deficit leads to depression), is located in the gut!

Another surprising thing about HMOs is that they bear a striking resemblance to glycans. Glycans are sugar molecules that are often latched onto by pathogens that infect our guts. HMOs, because of their similarity, often become the target, drawing fire away from a baby’s own cells. It is thought that HMOs may even obstruct HIV, which may explain why more than half of infants who feed from infected mothers don’t get infected, despite drinking virus-loaded milk for many months.

B. infantis also releases other chemicals whilst it chows down on HMOs, one of those is salic acid. Salic acid is an essential nutrient for brain growth and cognition and baby’s brains do a hell of a lot of growing! Previous Fun Facts are testament – in Week 56 we found out that a newborns brain accounts for over 10% of its entire weight, when in adults its only 2%. In Week 67 we unearthed that a baby’s brain grows by 1% every day from birth and in Week 62 we discovered that by the age of three, the brain will have reached 80% of its final size! Salic acid is essential to this growth and B. infantis contributes to this.

BONUS FACT #2 – Social species of monkeys and apes have higher milk oligosaccharides than solitary ones. One theory is that living in larger groups requires higher social pressures, managing friendships and manipulating rivals etc. and that these demands on the brain may have been what drove the evolution of primitive intelligence.

Every time scientists have pitted a pathogen against cultured cells in the presence of HMOs, the cells have come out smiling. Research and our understanding of the human microbiome is still in its infancy (pun intended) and constantly evolving as we discover new and exciting things.

Who knows what they’ll find next…