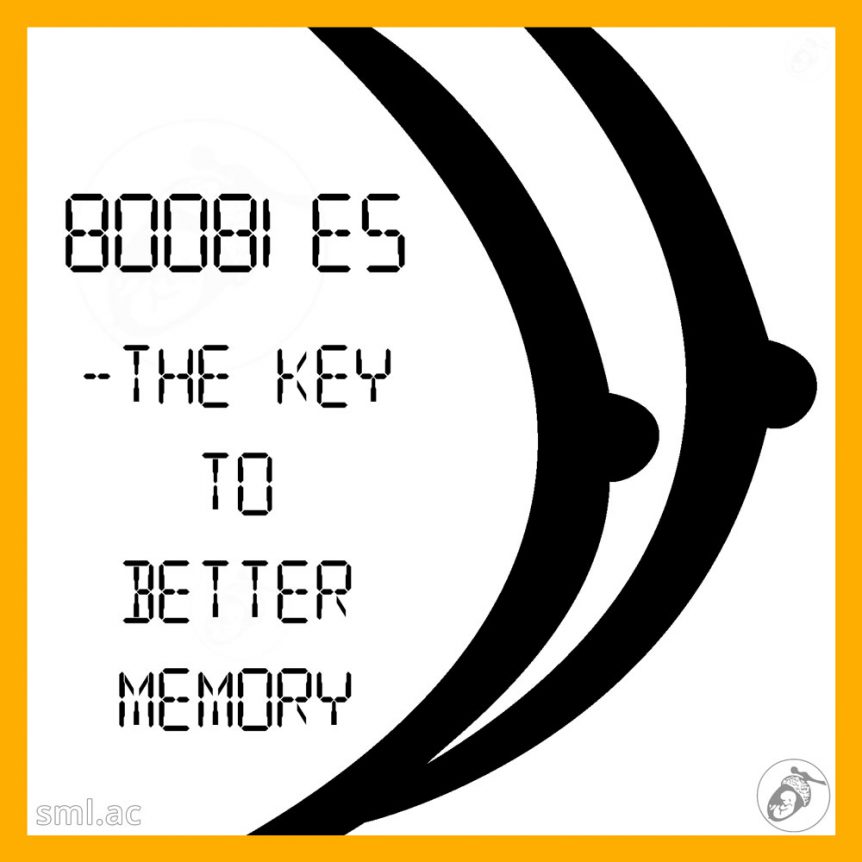 Not the boobies themselves but their milk! You see breast milk contains an ever growing list of components and one of them, in particular, has shown to have effects on improving memory.

Week 57 – we looked at tryptophan and how it helps to regulate mood.

Week 63 – when we found out about the enzyme lysozyme and how it protects babies from diarrhoea causing diseases, especially E.coli and salmonella.

Week 68 – we discovered that breast milk contains taurine, famous for being in Red Bull and other energy drinks

Week 74 – we found out breast milk, much like the Shreddie’s adverts of the 90’s, can “keep hunger locked up ’til lunch”, thanks to the satiety hormone, leptin.

Week 77 – whilst not looking at a component, but at its effect upon the thymus gland of breastfed infants, more than doubling its size.

This week we’ll be looking at one of the vitamins found in breast milk that is essential for brain and liver development, choline.

It is thought that less than 10% of people consume adequate levels of choline. Whilst the body can synthesise some of the choline that it needs, the diet provides a substantial amount required for good health. Foods that are high in choline are eggs, liver, seafood, nuts, legumes, spinach and cruciferous veggies (broccoli, cauliflower, kale etc).

Choline plays a critical role in fetal development (especially around 22 days gestation), its role in preventing neural tube defects (such as spina bifida and anencephaly) is as important as folate (the reason pregnant women are urged to supplement folic acid). Choline levels are often far higher in babies whilst in utero than the mothers – choline levels in amniotic fluid can be as high as 10x that of the mother’s blood. Choline and folate work in synergy and both are needed for neural tube closure.

In a study of nearly 1400 dementia patients in 2011. Over 4 years they tested verbal memory, visual memory, and verbal learning. All of these were improved with higher choline intake and has shown that memory and learning are greatly influenced by choline consumption alone.

In studies with rats, they have found that choline is important in the development of the hippocampus (the memory centre of the brain) in utero. They found when a mother was given more choline (4x dietary levels) during the critical developmental stage of the hippocampus, the offspring attained far better brain development and performed better on memory tests. Conversely, those whose mothers were deprived of choline during that critical period of pregnancy do worse on memory tests.

It’s worth noting that rodents can be a good model for humans because a lot of the structure and connectivity that exists in human brains also exists in rodents, especially rats. Much of our understanding of the human brain has come from this type of research.

There has been research in humans to try to mimic the above results, but the results were inconclusive. Their last measurement was taken from babies at around the 1-year mark and concluded choline uptake in pregnancy showed no discernible difference.

Unfortunately, this does not represent an equivalent study to mimic the results. It failed to account for lifespan adjustments – rats live far shorter lives and thus age and develop far quicker than humans. It also failed to take into account brain development at birth – a rat is born with a more or less mature brain, where as a human brain matures after birth and does not reach adult like development until around 4 years old.

These alone would make the study flawed and thus unable to show any true effects. The equivalent in rats would be to measure them before they were born! Sadly these type of studies are too common and only mislead laymen and the public in general.The studies in rats hold far higher validation than the heavily flawed human “equivalent” and should be noted.

Whatever your opinion, it’s clear that this fantastic vitamin plays an important role for the entirety of our lives, from just days after conception, all the way into old age.