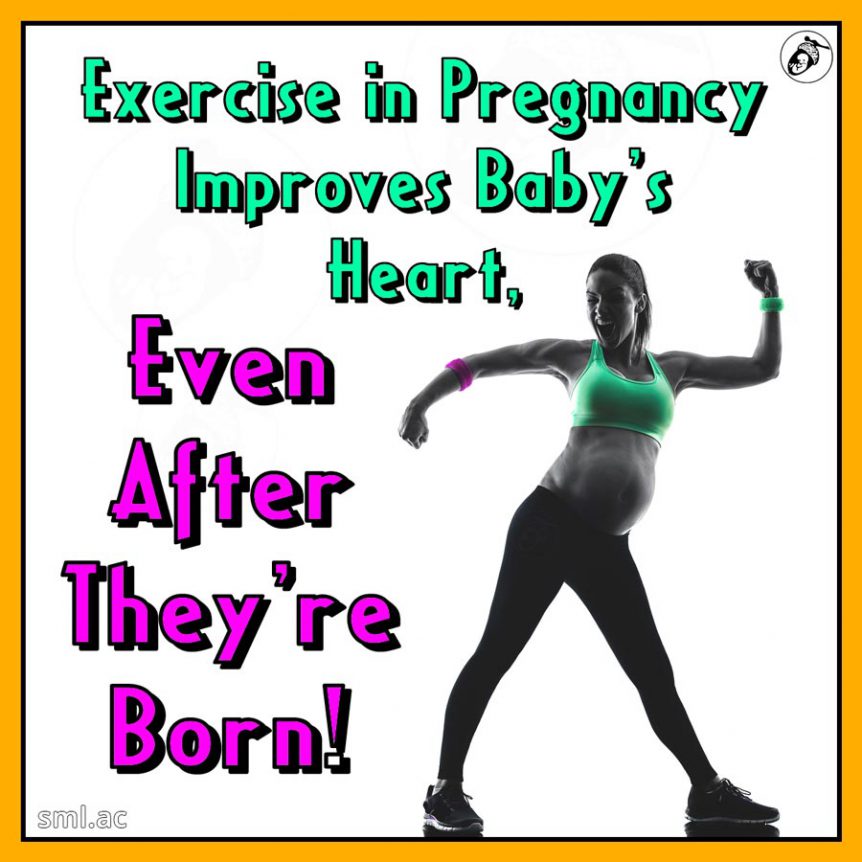 We all want good heart health – after all, our hearts are an intrinsic part of us. What if you could improve your child’s heart health by exercising yourself, before they’re even born?

Everyone is aware that exercise is good for you and good for your heart, and this is especially true if you are pregnant. Exercise in pregnancy is known to lower maternal blood pressure, ease musculoskeletal pain, reduce swelling and improve mood. Exercise during pregnancy has also been shown to reduce the likelihood of developing gestational diabetes, improve postpartum recovery time, improve sleep and improve your chances of an uncomplicated birth.

Most types of exercise are suitable throughout pregnancy if your body is already adapted and used to it. One mother even completed the Boston marathon whilst 7 and a half months pregnant, with an amazing time of 4 hours and 19 minutes! If however, you’re not an elite runner or avid exerciser then don’t be discouraged, there are many other types of gentler exercise tailored for pregnant women, one of them being aquanatal yoga. FYI Bev is an aquanatal yoga teacher and teaches every Monday here in leafy Croydon, more details here.

Today we’re focusing on one thing that is often overlooked when discussing exercise during pregnancy – the positive effects on your baby’s heart.

Babies’ hearts start beating really early in pregnancy, usually before many women even realise that they’re pregnant. Week 88 bought this discovery when we found out that at a mere 3 weeks after conception the myocardium (the muscular tissue of the heart) begins to beat rhythmically. During pregnancy, a baby’s heart may beat over 60 million times! 60 MILLION TIMES, before they’re even born… don’t believe it? Have a look at Fun Fact Friday week 75 to find out more.

Many years ago it was discovered that a baby’s heart rate would increase whilst its mother was exercising. The common theory was that this response was considered transient, lasting only whilst the mother was working out. However, Dr Linda E May, an exercise physiologist, wondered if this effect would contribute to more permanent changes, effectively remodelling an unborn child’s heart.

In a study in 2008, researchers from the Kansas City University of Medicine and Biosciences looked at 61 women at 28, 32 and 36 weeks into their pregnancies. Roughly half were active exercisers throughout their pregnancy – exercising at a moderate pace at least three times a week, whilst the other half “were normally active but did not engage in formal exercise”. Their results showed that babies in utero do exhibit a training response to a mother’s exercise!

The results were compelling, so much so that it raised the question of whether or not this response carried on after birth. So, Dr May asked the women back to the lab when their newborn bundles of joy were four weeks old.

The original results still held true, the babies of mothers who exercised throughout pregnancy continued to have lower heart rates and greater HRV than those of non-exercising mothers. According to Dr May, the results were especially robust in the children whose mothers had exercised the most, they had the slowest heart rates and presumably the strongest hearts.

The next step is to see how far into childhood this effect lasts. Could it even last into adulthood? Only time will tell. For now though, if you’re pregnant and are considering exercise, know that you will be improving your baby’s heart, potentially for far longer than anybody realises.