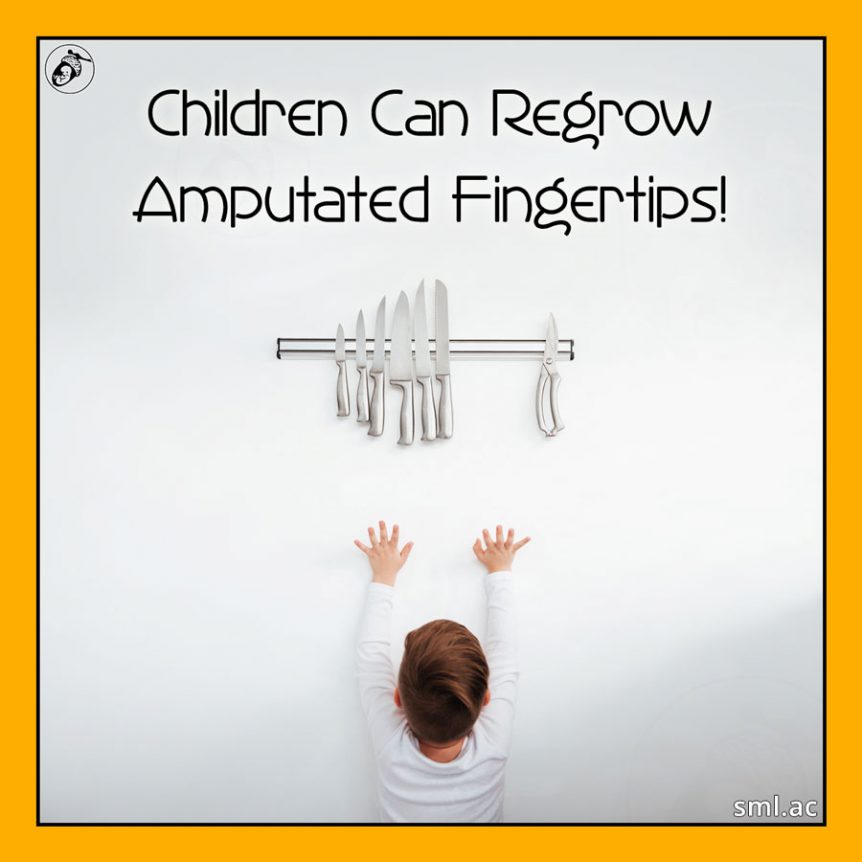 If a salamander loses an arm or a leg, it can grow a new one. If we were to lose our arm or leg, we’re shit out of luck. However, if you’re a child and you lose the tip of your finger, it may just grow back…

We are superhuman, at least children are. They have:

Super Strength – we looked at how babies can support their entire body weight whilst hanging from their hands in week 24 when we found out about the highly questionable “hang babies from a stick” experiments! Here’s a video showing them…

Super Swimming Abilities – Week 80 brought with it the discovery that we’re all born with a diving reflex that slows our heart rate and reduces blood flow to the extremities, with the added bonus for children below the age of 6 months of having the ability to completely close of their airways and divert any water into their stomach!

Super Language – Babies speak dog, something we looked at in week 98.

This week’s Fun Fact brings with it something that appears to be more science fiction than an actual fact!

Children can, in fact, grow back their fingertip. now we’re not just talking a bit of flesh the top of your finger, we’re talking about a proper amputation – loss of nail, flesh, AND bone!

There have been reports of this strange, but awe-inspiring, phenomenon since the 1970s when doctors around the world started reporting similar cases in young children. If the amputations occurred above the nail cuticle, there was a good chance the finger would grow back, any lower and no such thing occurred.

Our hair and nails continually grow throughout our lives, they need a little factory of cells at the start to produce them, this little factory contains stem cells, something we looked at in week 89 when we discovered that a baby can heal its mother whilst in utero.

Scientists see similar things in mice, not just in young mice, but in adults too. As long as there is enough of the nail epithelium (the tissue that lies just beneath the nail) left then they regrow.
Researchers looking at this phenomenon have identified a population of stem cells that lie just beneath the base of the nail (claw?) – a small population of self-renewing stem cells, which sustain the nail’s continuous growth.

The continuing growth of our nails depends upon signals made by the stem cells, called Wnt. Wnt proteins can orchestrate growth all over the body and it is known for coordinating the formation of limbs and some organs during a baby’s time in utero.

The researchers discovered the process that’s undertaken to create a new fingertip. It all starts when the nail stem cells signals (Wnt proteins) attract nerves to the affected area. These nerves drive the growth of other stem cells, known as mesenchymal cells, that can restore tissues such as bone, tendons and muscle. The whole process relies on the presence of the nail stem cells found in the tissue just beneath the nail, if these cells remain after amputation then they can trigger the regrowth. If they are lost, then so is the digit!

It appears we may still retain part of our amphibian heritage, or is it just another superpower that we are yet to fully explore?

Is the key to unlocking our superhuman abilities, regenerating entire limbs, already at our fingertips?