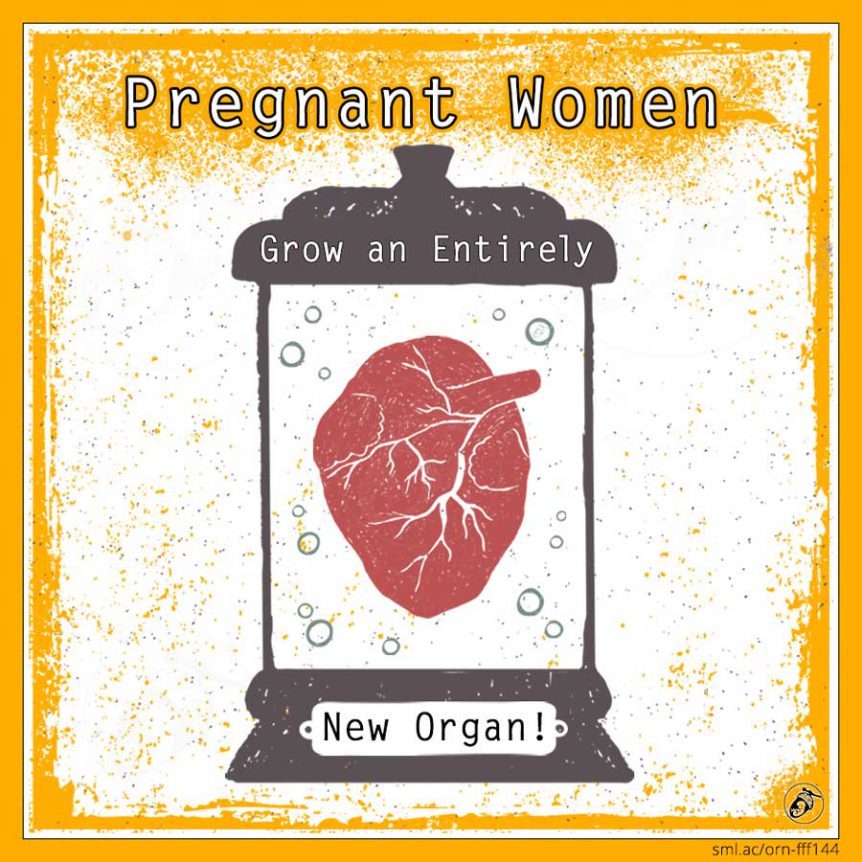 Pregnancy is a pretty amazing feat, women grow a new, tiny human all by themselves, in their tummy with little help from anyone or anything else…

Except for a brand new organ that they have to grow to help act as a conduit to creating the amazing new life within them, then some of them eat it!

This is a fascinating example of the brilliance of evolution. It has a plethora of purposes and today we’re going to look at this amazing organ and many of its functions.

If you haven’t guessed by now, we’re looking an organ that is known in some cultures as the “tree of life”, the “baby’s blanket” or the “baby’s friend”. This week we’re looking at the placenta, sometimes referred to as the afterbirth, because, as the name suggests it comes after the birth.

The placenta is about the size of a side plate, as thick as a good steak, and weighs around half a kilo. It has a smooth side and a rough side, the smooth side is baby-facing and the rough side is where it attaches to the womb.

A placenta starts to develop when the outer cells of a fertilised egg or blastocyst bury into the uterus wall (endometrium), whilst the inner cells begin to develop into a baby. Some of the cells from the forming placenta develop into the into the inner layer of membranes, known as the amniotic sac. It’s not until the sac is formed that medical professionals consider the egg an embryo. This usually occurs at around 10 – 12 days into pregnancy.

By 8 weeks the placenta will have formed tiny hair-like projections, known as villi, that extend into the walls of the uterus. It is within these villi that blood vessels form, the very blood vessels that pass through the umbilical cord to the baby. As the weeks pass these projections branch and re-branch in a complicated tree-like arrangement to provide resources to an ever-growing baby.

It’s here, within the villi, where much of the work a placenta has to do happens. A thin membrane separates the mother’s blood that surrounds the villi (in the intervillous space), from the baby’s blood within the villi. This allows the transfer of materials from mother to child and vice versa. It also prevents a mother’s immune system from attacking the baby, this is because a mother’s antibodies are too large to pass through the membrane.

Let’s take a look at some other facts that make a placenta FFF’n awesome:

It Acts as a Gland
From Human Chorionic Gonadotropin (hCG) and IGF-1, the placenta is responsible for a tonne of hormones, much like a gland. hCG stimulates the production of oestrogen and progesterone, is associated with morning sickness and is the hormone that produces the little blue line on those pregnancy test wee sticks. IGF-1 can sometimes be responsible for the development of gestational diabetes in some women.

BONUS FACT
The placenta doesn’t stop acting as the baby’s lungs immediately after birth, it can continue for a short while after they’re born and this is best illustrated with water births – where there can be a delay between birth and the baby taking its first breath. A baby’s first breath is not triggered until their head is in the open air and there is a sudden change in temperature.

It’s Part Mum and Part Dad
Whilst many think of the placenta as being the mum’s, it is actually made from the fertilised egg or blastocyst. It’s easy for most of us to think of it as the mother’s organ, but technically it’s made from both the mother and the father.

It Provides Immunity Protection
In some situations, the placenta can provide protection from infections whilst in the womb. Before birth, the placenta transfers over antibodies from the mother that help protect a baby for up to 6 months after they are born.

The Placenta Has No Nerves
It develops without nerves and functions without connection to the mother’s nervous system. That means it has no connection to a mother’s brain and cannot be controlled by her body at all.

It’s a Disposable Organ
Although there are other organs that we can survive without, the placenta is the only one that is pre-designed to be expelled once it has fulfilled its purpose.

Identical Twins May or May Not Share a Placenta
Depending on how the fertilised egg splits, there may be one or two placentas. If the egg splits into two embryos before the formation of the placenta, then there will be two of them. If it happens after, then there will only be one that is shared between the twins.

When the Placenta Goes, the Milk Flows
A woman is capable of breastfeeding from about 4 months into pregnancy. But, the high levels of progesterone and oestrogen that the placenta is responsible for increasing prevent the milk-making hormone prolactin from doing its job. Once the placenta has gone, along with its hormones, it enables prolactin to take full effect. Prolactin’s effect can be really strong and can also pass through breast milk. Because of this, it spurned week 23’s fact showing how it can even cause baby boys to lactate.

It’s a Blood Exchanging Machine
Every minute half a litre (1 pint) of blood is sent to the uterus to exchange nutrients via the placenta.

Both the Mother’s and the Baby’s Blood Pass through It, but They Never Mix
Even with the incredible blood flow that goes through a placenta, the mother’s and child’s blood never mix!

Babies Can Send Cells Through It to Heal a Mother’s Organs
Whilst their blood never mixes, that doesn’t mean that a baby is completely isolated from its mother’s system. In week 89 we discovered that a baby can send stem cells through the placenta to help heal its mother if she sustains injury to any of her organs.

Some People Leave the Placenta Attached
There is a practice called a lotus birth where the umbilical cord is left uncut to allow the placenta to naturally separate. This usually occurs within 3 – 10 days.

Some People Bury the Placenta
In New Zealand, it’s Maori tradition to return a baby’s placenta to the land. In Indonesia, the burial of placentas is a common ritual that transcends that nation’s various religious and ethical lines.

Women That Live at Higher Altitudes Create More Efficient Placentas
Women from the high altitudes of the Andes had far larger babies than those who had more recently moved to join them. Just as you would expect from generations of evolution, these women were far more efficient at drawing oxygen from the thinner air associated with the high altitude. A study looking at this suggested that the placenta too has undergone similar evolutionary changes to help accommodate the thinner air.

Some Women Eat the Placenta
The placenta can be consumed in different ways, raw, added to a smoothie and can also be dried and put into capsules. We are divided when it comes to this subject, Bev is pro – I’m against. Without going deep, let’s explain our standpoints:

Bev is pro placenta supplements because of the prolific anecdotal evidence promoting the positive effects they can have, from reducing postpartum depression to speeding recovery time. It is often cited that it’s perfectly normal because other animals do it. There is some evidence suggesting that some beneficial hormones can be transferred to the mother by consuming it.

I (Jamie), on the other hand, have a very different outlook. For one, the few studies that have looked at this have shown little, if any, benefits. Secondly, the power of placebo should not be overlooked. But my main gripe is down to what the placenta actually does. The placenta essentially acts as a filter for the baby, keeping out harmful elements, such as heavy metals and other pathogens that could affect the baby. From my viewpoint, the potential upsides are comparatively small, compared to the downsides of consuming everything that was stopped from reaching the baby for 9 months.

Whether you choose to or not, there are compelling reasons from both sides, and it undoubtedly comes down to personal choice and circumstances.

The placenta is an amazing organ and is often considered to belong to the mother. Yet, if we think about it, it makes more sense for us to think of it as the baby’s. It serves little purpose for the mother and yet it creates nearly everything the growing baby needs. Its only task is to help the baby grow and survive, doing everything for the baby, and very little for the mother while also actively protecting the baby from the mother and her immune system. It sends hormones to the mother to make her body change and adapt in preparation for the baby and acts as a baby’s organs for much of its time whilst in utero. It is the baby’s organ.

Yet once a baby is born, in many environments, the first thing that is done is to separate a baby from it. This happens when the umbilical cord is cut too soon and it is still common practice within many institutions. We looked at this in more detail back in week 100 when we discovered that, at birth, 30% off a baby’s blood is still in the placenta. With this in mind, and the fact that this amazing organ has provided everything to our baby, why do we separate them with such haste?

If we wait, the connection to the placenta – the umbilical cord – shows us all we need to know. After birth, somewhere around 5 – 20 minutes, it will stop pulsating, showing us that it has passed on all the blood to the baby and it will lighten in colour and flatten. This shows us that the placenta has now finished providing for the baby and is ready for its next purpose – be it to stay attached for a lotus birth, to be mixed into a smoothie, dried and put into capsules or to be returned to the earth and help more small acorns become the beginnings of a thousand forests.