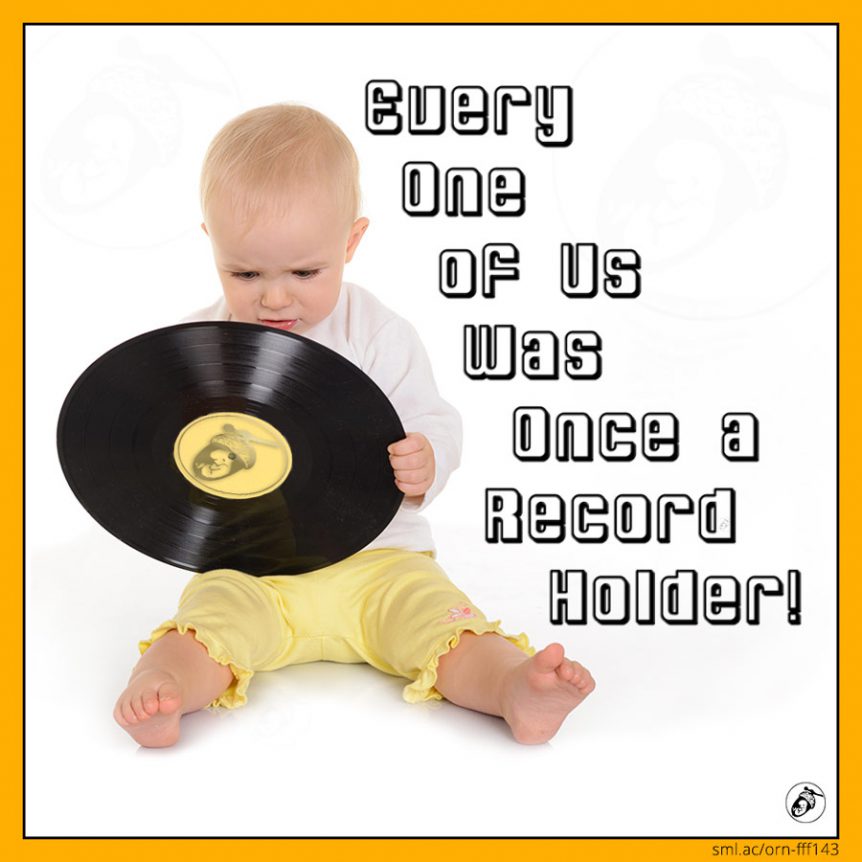 There are many of us that would love to hold a world record – from the obscure to the death-defying, there’s probably a record to suit you. But did you know you’ve already held a record, maybe for a split second and some of you may even have held it for multiple seconds?

We’ve looked at a few baby-related records over previous Fun Fact Fridays. The earliest premature baby that survived at just 21 weeks into conception on week 21 and week 55 showed us that 2016’s heaviest baby weighed a whopping 6.8kg (15lbs). Then we looked at the oldest mothers to ever have children – the world’s oldest in week 85 and then in week 115 we took a look at the UK’s oldest.

This week we’re looking at each and every one of you. You were all holders of a very prestigious record, but before we get there we’re going to take a look at a bunch of other baby-related world records.

The largest baby massage lesson was in Jakarta, Indonesia on 7th October 2017 and had a whopping 629 participants.

André Ortolf from Augsburg, Germany, holds the record for the most baby food eaten in a minute. On the 22nd February 2018, he ate just over a kilo of baby food in one minute. He also achieved two other records on the same day – The fastest time to drink 200ml of mustard and the most jumpers put on in 30 seconds (team of two).

The fastest male marathon runner to be dressed as a baby is held by Ali King of the UK. In 2014’s London marathon, he set the record at an impressive 2 hours, 51 minutes and 18 seconds.

The largest pram, AKA stroller, had an enclosed length of 1.38m. It was a scaled up version of the Contours Bliss, built by the company’s president, to help adults test how the pram felt before purchasing one for their baby

The record for the most people pushing prams in one place happened at Tsim Sha Tsui promenade in Hong Kong. On December 15th 2013, the record was set at a staggering 746 individuals, all of whom were pushing prams.

Way back at the advent of Fun Fact Friday, our very first fact was that some babies are born with a tooth, approximately 1 in every 2500. But some babies are born with multiple teeth and the record for the fullest set of pearly whites at birth goes to Sean Keaney, of the UK, who was born with a staggering 12 teeth on 10th April 1990. They were, however, extracted to prevent possible feeding issues and he grew his second full set of teeth at the more common age of 18 months.

The twins separated for the longest ever period met after 78 years. Elizabeth Hamel and Ann Hunt met for the very first time on 22nd April 2013 and broke the previous record that was set a day shy of 70 years. The BBC followed their journey and their eventual meeting and managed to capture their first words to each other, that happened to be exactly the same, “How lovely!”.

Some of you may have held a record for just milliseconds, others may have held it for multiple seconds, but the likelihood of you holding it for any longer is slim, and to hold it permanently would spell the end of humanity.

You, and every one of us, once held the record for being “The Youngest Person on the Planet” and at the same time we were also “The Last Born Human in the World”.

With an average birth rate of 255 births every minute or 4.3 births every second, the likelihood of you holding the record for more than a second is slim. If you seek to hold a record for longer than a second then we suggest you take a look at some of the more obscure records and have a go at breaking them instead, we’ll leave you with just a few that may be within your grasp –