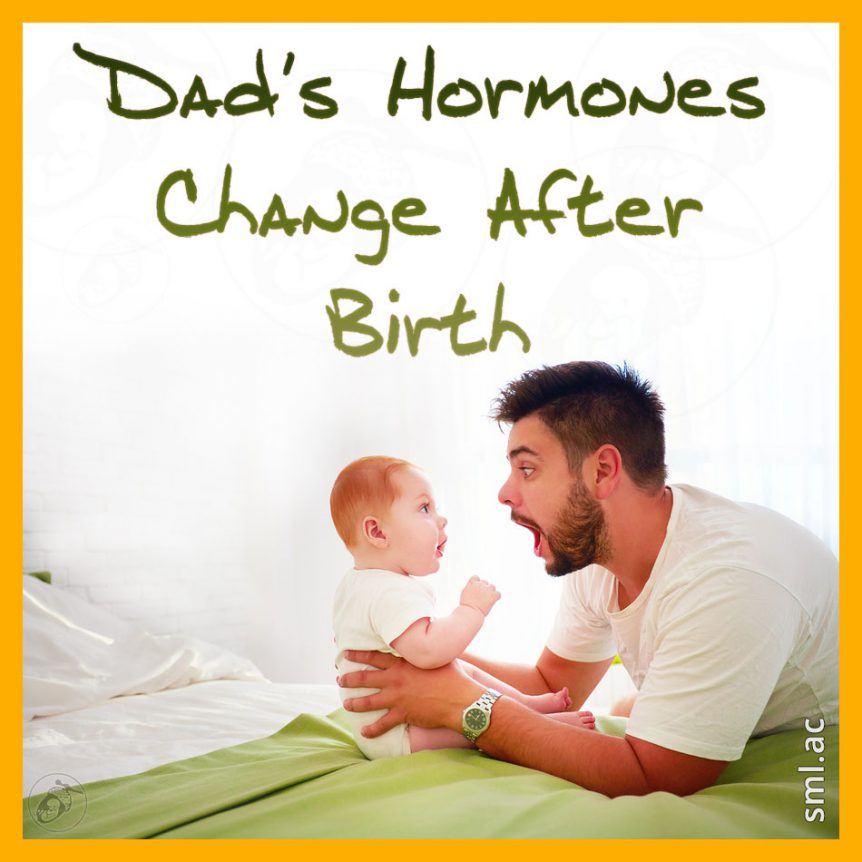 For the FFFR’s (Fan Fact Friday Regulars) this will be of no surprise, because in week 69 we found out that Dad’s hormones change during pregnancy, where we touched on couvade syndrome – AKA sympathetic pregnancy – where expectant dads can experience some or all of the same pregnancy symptoms as mum!

The shift in hormones prior to pregnancy primes dads for bonding with the newborn and helps them focus more on their family. This shift doesn’t stop at birth though, it can continue for many weeks and months after.

In the days after birth, both Dads and babies will experience changes that will forever alter their brain. A biochemical bond is quickly established between fathers and their offspring, and these biochemical processes are what forges their bond – very similar to those of the mother during pregnancy.

In week 69 we mentioned the rise in oxytocin that Dads experience. This has been shown to rise in men after birth, not just in women, as it was previously thought. The rise in oxytocin helps in relationship building, both with baby and mum and can have positive long-lasting effects upon the whole family.

Oxytocin plays a role in altering a father’s brain and effectively hardwires it to respond to any threat to an infants comfort and/or survival. There have also been studies that have found sniffing a dose of oxytocin gets father more engaged whilst playing with their children.

Other studies have shown that fathers with the highest levels of oxytocin played more with their children and seemed more attached to them than those with lower levels. Another study noted that physical play with children also seemed to boost fathers’ oxytocin levels in its own right.

For more info on the wonders of Oxytocin AKA the “cuddle chemical” have a look at this post.

Then there’s prolactin, a chemical known for promoting lactation in women, and lesser known for creating witch’s milk in newborns. Prolactin is another hormone that changes in men after birth.

Prolactin is strongly related to offspring care in the animal kingdom, from emperor penguins that look after the egg so the mother can return to the sea for 2 months to regain her nutritional stores – to wolves that are monogamous and fiercely protective dads, who stand guard and hunt food that it shares with its new family – to pipefish and seahorses that carry their offspring on the front of their bodies in something called a brood pouch until hatching.

Studies have shown that prolactin levels are higher in fathers than in non-fathers, and some have shown a link between increased prolactin levels and a father’s alertness and responsiveness to their baby’s cries, but there are other studies with mixed findings. What we do know is that prolactin is a hormone with multiple functions – promoting weight gain, inhibiting reproductive function, improving responsiveness to anxiety and promoting milk production, among others. How all those functions contribute to exactly to fatherdom are yet to be fully explored.

Check out this amazing video of a father in labour, giving birth to hundreds of babies!