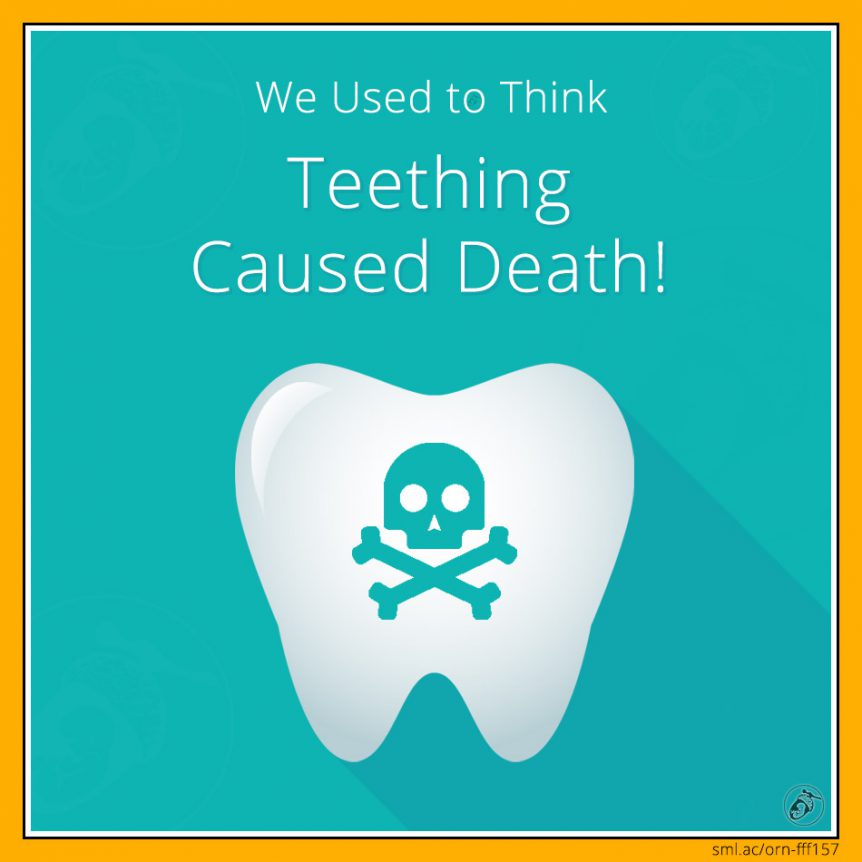 There are many assumptions that we’ve made in the past about the types of things that can kill us – from telephones, televisions, trains and tomatoes – to wi-fi, robots and the Y2K bug.
But, one innocuous thing, that we have all suffered through, was once thought to kill a third of us…

This week is part two of our Fun Fact Friday series on teething. If you didn’t join us for our first week, check it out! There, you’ll find out why some common behaviours associated with teething aren’t always all they’re cracked up to be. And you’ll also get to find out when teeth arrive, in what order, and how many teeth the current record holder was born with.

As part of this series, we also have a really easy teeth arrival chart for you to download completely FREE!

And then there’s this GIF too, whoop!

There are many things we did in the past that we would be unlikely to do today. And guess what? When it comes to the realm of pregnancy, birth and babies – there is a myriad of them. Previous Fun Facts have covered some from the obscure to the dangerous…

Week 147 showed that we were once told to bathe our newborns in lard and week 142 unveiled the weird case of us sending babies in the mail. Week 146 took a slightly darker turn and revealed how the date rape drug “scopolamine” was used to administer a twilight sleep through the birthing process. Whilst week 109 took a more serious look at the devastation caused by the “hands-off” parenting approach – an approach that caused the death of many children.

Then there’s the baby cages from week 94, the 11-day-olds placed faced down in water to test their swimming reflex in week 64 and the the “hanging babies from a stick” experiments from week 24

Teething, as we know today, causes very little other than… Teeth! But, that wasn’t always the case. Teething was once the arch villain and everything related to a babies’ woes were often blamed upon teething.

This poor rap that teething received, goes all the way back to Hippocrates himself – the father of modern medicine and the namesake of the Hippocratic oath. Hippocrates noted that teething infants suffered from an array of ailments including itching of the gums, convulsions, diarrhoea and fevers. He died in 370 BC, but his pronouncements about teething are yet to follow.

Moving into the past few centuries, it was thought that teething upset “the fragile nervous system of a child” and that teething was the cause of everything – insomnia, drooling, deafness, convulsions, paralysis and even death.

Here in the UK, during the 19th century, more than 10 per cent of childhood deaths were blamed on teething. Even as late as 1894, in the US, you could find doctors who thought that teething was killing children. One such doctor, Dr Thrasher, wrote in the dental journal of the time “So deadly has [teething] become, that one-third of the human family die before the twenty deciduous teeth have fully appeared.”

Part of the reason for the high mortality rate was caused by the very attempts to cure teething, using direct intervention. It became a popular practice to cut the gums in a process called lancing – where they cut through the gum right down to the tooth. And, in other cases, they even extracted those teeth once they got to them. These procedures were rarely sterile and there were many children who died of infection because of those processes.

Folklore is strewn with remedies to help ward off the curse of teething. There were amulets adorned with coral, a wolf’s tooth, semi-precious stones, or magical charms. The ancient Greeks would rub the brains of a hare on babies gums and that same practice can be found in recent American folklore.

In British folk medicine, bags containing woodlice or hairs from a donkey were placed around a baby’s neck to protect it from the dangers of teething. Plants were used too. There were necklaces made from figwort stem, peony root, or sea grass, and teething beads made from the stems of elder and traveller’s joy.

Then there’s the use of narcotic plants. These were often made into necklaces that could be chewed upon to aid teething. They included henbane, orpine, vervain and orris – and the use of some of these plants can be traced back to the fourth century.

However, one plant has been used far more prolifically, in more recent times, than in any other time in our history – the poppy. But, we don’t have enough time to dive down that rabbit hole this week. You’ll have to tune in next week when we’ll find out all about it.

If you cast your mind back to last week’s fact, you may remember that teething lasts for about two and a half years, which averages out to be about 1 tooth every month. Those first few years are also a child’s most vulnerable years. It’s a time when they have an immature immune system and are far more susceptible to illnesses and diseases.
Our infant mortality rate is far lower today than they were when these assumptions were made. The high rate of infant deaths must have been concerning and finding a scapegoat would have made it easier to understand. Teething was easily blamed.

Should it be of any surprise that many doctors of the time put two and two together and came up with twenty? We’ll let you decide…