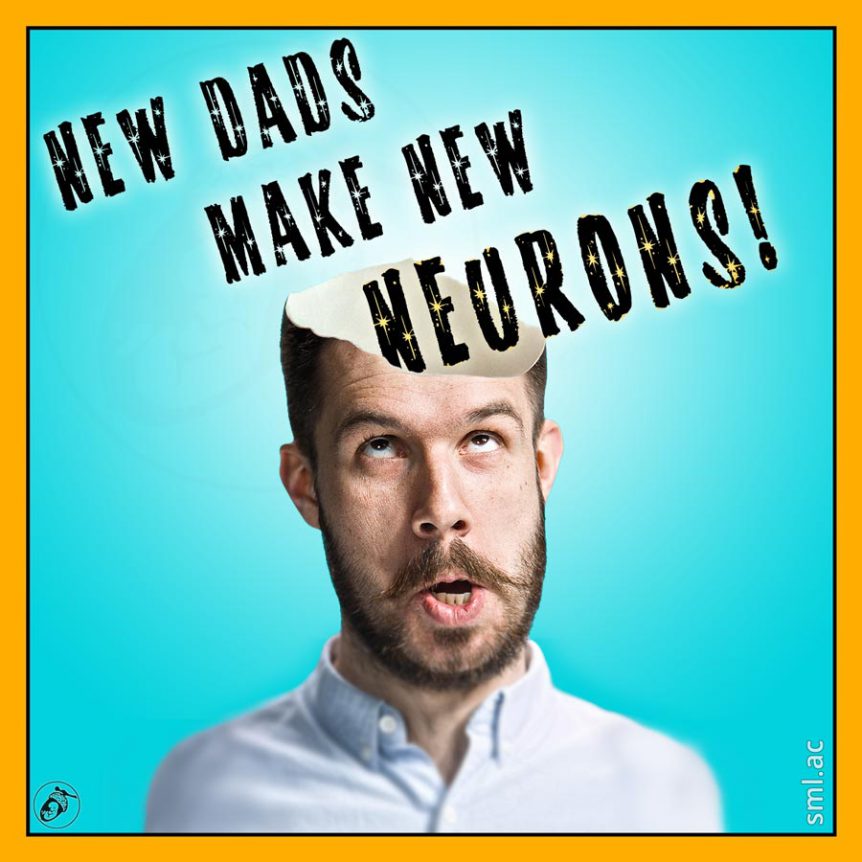 We’ve looked at how fatherhood can affect men in many ways from the hormonal changes they can undergo during pregnancy to even more hormonal changes when they become fathers. In week 69 we found out how Dad’s hormones change during pregnancy – including couvade syndrome – otherwise known as a sympathetic pregnancy, where expectant dads can experience some of the same symptoms as mum. We also looked at how dad’s hormones can change after birth – including rises in oxytocin – the cuddle chemical, and prolactin – which helps to increase fathers’ alertness to their babies’ cries.

This week we’re looking at the changes that happen on a neuronal level. We lightly touched upon these changes in week 84 with this paragraph –

“In the days after birth, both Dads and babies will experience changes that will forever alter their brain. A biochemical bond is quickly established between fathers and their offspring, and these biochemical processes are what forges their bond – very similar to those of the mother during pregnancy.”

The changes a new father will experience can go so deep as to form new neurons. In this study based upon male mice*, it was shown that neurogenesis (the birth of new neurons) took place in the days following them becoming fathers. However, this only occurred if the father stayed in the nest, if he was removed then no change occurred. One of the locations of these new neurons was in the olfactory bulb, an area responsible for smell, and they were specifically tuned to the smell of his pups. Another location of new neurons was in the hippocampus, the memory centre of the brain – an area we’ve encountered in weeks 67 and 86. This is where the smell of his pups was consolidated into long-term memory.

Being separated from their partner for more than a couple of weeks is usually enough for male mice to forget them. The same is not true for their offspring, even after long periods of time, a mouse father was still able to recognise his offspring.

An even more fascinating finding from the above study was that these changes could not happen without physical contact. When a barrier (mesh screen) used to deny contact between fathers and their offspring, there was no neurogenesis, illustrating the importance of physical contact.

There has also been another study, this time in humans, that has shown an increase in grey matter in several regions of the tested fathers’ brains (they were tested around 4 weeks after birth and then again 12 weeks or so later). That increase, however, comes at a cost – the shrinkage of other parts of the brain, including the orbitofrontal cortex (OFC) & left insular, areas of the brain have been implicated in anxiety and the researchers theorise that this shrinkage could reflect a diminishment of a fathers anxiety over the first few months of their baby’s life. To support this was the finding that fathers who were “bolder” in their physical play with their babies tended to have a “more accentuated OFC volume reduction”. Take a look at this article that goes into more details about the findings from this study.

We’ve known for a long time that physical contact is critical to the development of a baby’s brain. The one thing that stands out this week is that it may be just as critical for the development of a father’s brain. So, new dads out there, play, cuddle and absorb every minute you can get with your bundle of newborn joy – it not only forges your bond together, but quite literally changes your brain.

*It’s worth noting that rodents can be a good model for humans because a lot of the structure and connectivity that exists in human brains also exists in rodents. Much of our understanding of the human brain has come from this type of research.