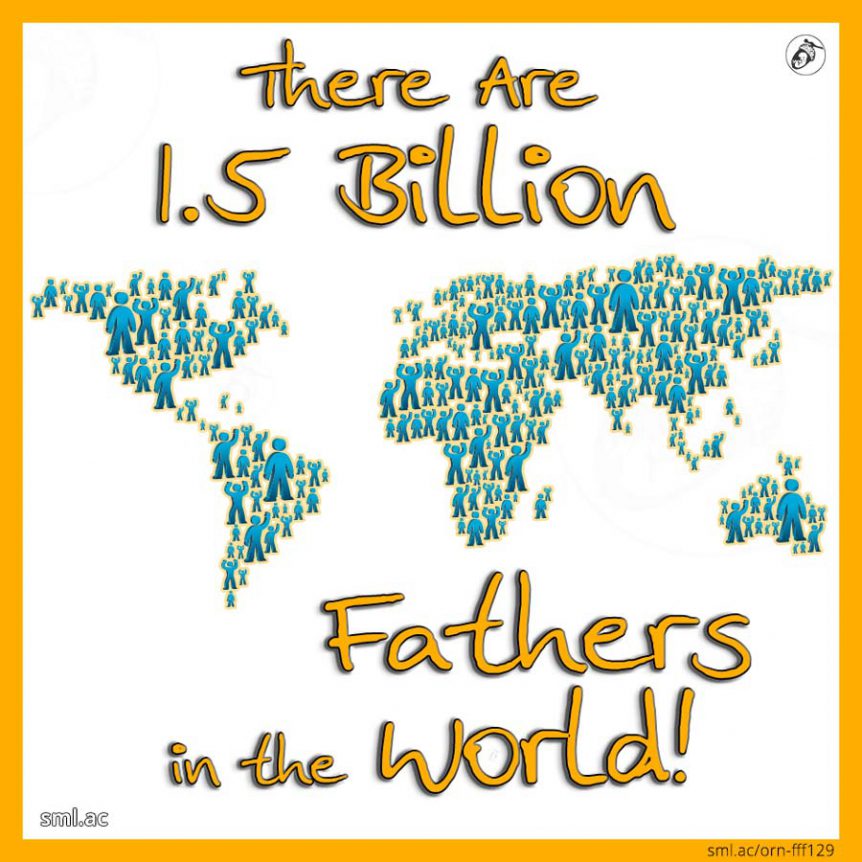 We think Dads are awesome and we’re known to spout it regularly. Sunday will be Father’s Day (ever wondered why it’s not called Fathering Sunday) and we thought what better a time than now, to show dads some love!

Dads, we think you’re amazing and to show that we love you, we’re going to name each and every one of you. Aaden, Aadit, Aaron (we’ll be here forever, how about just Dad, Papa, Pops etc.)

Nothing prepares you for meeting your child for the very first time. You are overwhelmed by a feeling of responsibility for them… for their happiness and well being… for their future. You are prepared to do whatever it takes to be fucking awesome in this new role. The influence that your parents had on you will be brought into perspective, both good and bad. Your job becomes breaking the cycle of bad ones and fostering the good.

Fathers have a crazy big effect on their children, something we at Small Acorn are all too often shouting about. With Father’s Day just around the corner, we thought what better a time to have a look at the facts that we’ve covered so far in honour of those 1.5 billion dads.

Week 69 showed that Dads don’t always get it that easy during pregnancy and that they can experience a whole myriad of hormonal changes during this time. They suffer drops in their levels of testosterone, with some studies showing up to a 33% decrease. This is thought to make men less aggressive and competitive, but more cooperative and able to bond with their impending newborn. It is also noted that this drop makes men less likely to go and sow their seeds elsewhere and encourages their focus on their family.

Pregnancy also brings with it increases in oestrogen, oxytocin and the lactation promoting hormone (in women, at least), prolactin. Prolactin is strongly related to offspring care and its exact function in men is poorly understood. What we do know is that it is responsible for weight gain (#DadBod), related to the responsiveness to anxiety and can also inhibit reproductive function – something that would complement the reduction in testosterone.

~
BONUS FACT
Way back in week 23 we covered something called witch’s milk that was caused by the hormone prolactin. Prolactin surges through a woman’s system before and after birth and is the hormone that causes a mother to start lactating. The levels of prolactin at 4 months into a pregnancy make it possible for a woman to be capable of breastfeeding. But, the levels of progesterone and oestrogen make this impossible and it is the reduction of these two hormones after birth that makes it possible for prolactin to work its magic. This is where the witch’s milk comes in – with prolactin being at such high levels, some of it inevitably gets through the breastmilk to the newborns. When a baby’s prolactin levels rise it causes similar effects, swollen mammary tissue and a milky nipple discharge called galactorrhea. This affects 5% of all babies, that’s right, it also includes the boys!
~

Fathers-to-be can also experience something call couvade syndrome, otherwise known as a sympathetic pregnancy. Couvade syndrome comes with a whole heap of associated symptoms, with one study listing 35 of them!

And it doesn’t stop there, week 84 showed us that dads also go on to have more hormonal shifts, once their baby is born. Most of these changes are to prime the father so he can establish a biochemical bond with his child. These biochemical processes are what forges a father-child bond – one very similar to that of a mother and child. Fathers also have a rise in oxytocin, that was previously thought to only happen to mothers. Oxytocin plays a role in altering and effectively re-wiring a father’s brain to respond to any threat that may affect his infant’s comfort and/or survival. The rise in oxytocin helps in relationship building and has positive, long-lasting effects for the whole family.

Week 91 brought with it the discovery that new fathers can make new neurons in a process called neurogenesis. In the days after birth, both dads and their newborns will experience changes that that will forever alter their brains. Whilst almost all dads will experience alterations in the way their brains behave, however small, some may also be fortunate enough to grow new neurons! Studies have shown that fathers gain grey matter in in several regions of the brain, but that it comes at a cost – the shrinkage of other parts of the brain. The parts that showed growth were involved in reward processing, hormonal control, emotional processing, memory and decision making. The parts that showed a loss have been associated with anxiety and those fathers that showed a greater loss in this area tended to play more “boldly” with their children.

Week 102 made the case for fathers having the ability to outperform mothers when identifying their own baby’s cry from other children’s cries. The study that we looked at found that there was no difference between men and women. They were able to show that the ability to distinguish your own child’s cries from others was based solely on the amount of time you spent with your child. Those who spent less than 4 hours per day performed the worst, both men and women. So if men were to spend more time than the mother with their little ones, they are more likely to be able to differentiate their own babies cries, even better than the mother. Think all baby cries are the same? Think again! Week 121 showed us that babies actually have different cries and you can learn to tell the difference.

In week 118, we showed how babies are born expecting a father to be present. That part of their brains are expecting the interaction with its dad and without his presence, that part of the brain simply dies off – absent fathers quite literally cause brain damage to their offspring. In addition to this, the parts of the brain that die off are related to a number of other functions, including metabolism, hormone regulation, decision making, rewards, expectations, and emotions. One area affected by this loss has been associated with OCD, compulsive and repetitive behaviour, and addiction. But, a more troubling association was in a child’s ability to sense and process touch, something that is absolutely critical to each and every child. Take a look at week 109 when we found out how withholding touch has actually killed babies, many thousands in fact, even when they were adequately fed and watered.

Many parenting habits are passed down through generations after generations. Sometimes parenting can be tough and you’ll regularly need to make decisions – pass down the habits of old or become a better version. In these situations, when we’re struggling to behave the way we want, we use the mantra – “Break The Cycle!”. Break the cycle of bad habits, find more favourable ones, break the cycle that was passed onto you from your parents, from their parents and so on.

Dads are crazy important when it comes to parenting and the development of their children – something we hope is evident from our previous Fun Fact that we’ve visited today. Sunday is the day we celebrate them all and say thanks. So thank you to fathers everywhere, thank you to each and every single 1.5 billion of you, you’re fucking awesome!